Is the Miami Beach Convention Center Redevelopment a Bad Idea? One City Official Thinks So – Next City

Is the Miami Beach Convention Center Redevelopment a Bad Idea? One City Official Thinks So 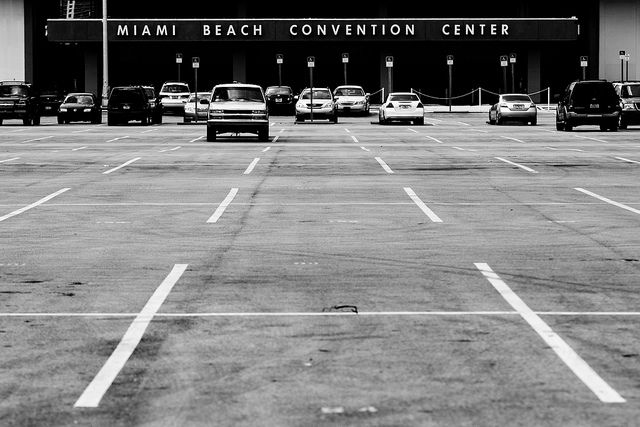 Miami Beach wants to update its convention center, but not just with a fresh coat of paint, new lines in the parking lot and a sparkling new sidewalk out front. Instead it wants to redevelop the whole 52-acre district near the Atlantic shore. And the city has narrowed it down to two bids, each amounting to more than $1 billion.

Commissioner Jonah Wolfson seems to be the only official in town opposed to the redevelopment plans. “I am not an anti-development guy,” Wolfson told me. “And it’s very hard to be the sole voice of opposition. But these massive developments are just cheesy. It makes no sense from a planning perspective.”

The two bids in play are from Portman CMC, which collaborated with Danish architecture firm Bjarke Ingels Group, and South Beach ACE, which brought on Tishman Realty, the same firm that did the Jacob Javits Center expansion and renovation in New York and the Pennsylvania Convention Center expansion and renovation in Philadelphia. Each group also has a host of landscape designers and developers involved.

Two weeks ago, when the teams presented their full bids, it sounded more like a high school cafeteria than a heated battle for a massive redevelopment project. (They’re even trading barbs on Twitter.) Portman CMC presented a different plan than it had in the preliminary stages months ago. The new plan, according to the Miami Herald, was eerily similar to South Beach ACE’s — Portman CMC suggested attaching an 800-room hotel to the southern end of the convention center, restoring the Jackie Gleason Theater and adding a cultural center.

“Imitation is the sincerest form of flattery,” Daniel Tishman, from the ACE group, said in a press release. Jack Portman, vice chairman of Portman Holdings, said the change in plans happened because the community expressed concern about the Gleason Theater. Portman’s initial plans called for putting a hotel where the Gleason now stands. ACE has planned on renovating it all along.

The ACE bid came in at around $1.2 billion and Portman CMC $1.15 billion. Portman said its plan will generate $80 million more than ACE for the city in rent payments from retail. ACE fought back by saying its own plan has far less retail because it doesn’t want to take away business from Lincoln Road Mall around the corner. The biggest difference is where Portman envisions a huge ballroom that opens into a semi-enclosed public square bordered by City Hall and retail spaces. ACE plans for a wide open 70,000-square-foot plaza. (My vote, as if Miami Beach cares, goes to the plaza.) 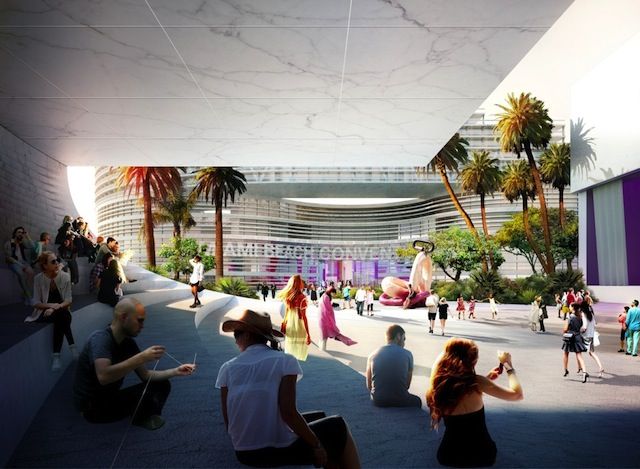 A rendering from the South Beach ACE group.

Kai-Uwe Bergmann, a partner at Bjarke Ingels Group, touted the Portman plan for its cheaper cost to the public — $75.6 million less, according to the release he sent me — and much shorter time frame (19 months).

“Do you want to have cranes outside your window for another year and a half?” Bergmann asked. He has a point. 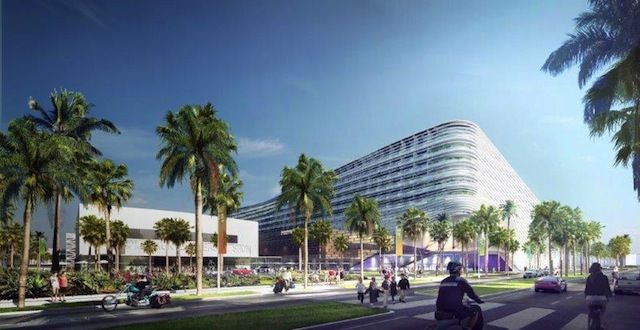 A peek into Portman’s vision for the convention center.

All pettiness aside, the plans are likely similar because they promise to deliver what the city asked for — a big gleaming convention center with retail and hotels and luscious landscape architecture. It’s not like one firm is going to come in with a Quonset hut-themed development and the other with disco flair. They’re professionals. It’s 52 acres, but there’s only so many ways you can fit a new hotel, retail, apartments and green space in with existing infrastructure. The plans are bound to be at least vaguely similar. The teams know what the city wants.

Which brings us back to Commissioner Wolfson (that’s not a singular title, he’s one of six elected commissioners), the self-proclaimed sole opposition who formed a political action committee with a petition to change the city charter and make it very difficult for the project to happen. Is this really what the city wants?

“People come to Miami Beach for the beach,” he said, making a fair point. “This is not a convention town. I don’t have a problem with renovating our existing structure, but the concept of expanding is not wise from a planning perspective. I don’t think it’s wise from an economic perspective. And the amount of debt they’re looking to take on in order to accomplish that is unwise for the economic future of the city. It’s nonsense.”

I’m not from Miami Beach and I’ve never been there, so I can’t pass judgment on its merits as a convention town. But I can’t disagree with Wolfson’s argument against taking on debt. A press release from the ACE group argued that its private financing structure — a ratio of 50.9 percent debt to 49.1 percent equity, versus 61 percent to 39 percent from Portman — was balanced. But that’s still a lot of debt, no? You could make the argument that it will create thousands of jobs, but at what cost?

Wolfson said that development has to be organic. “To go in and drop a spaceship in the middle of this area, to me it’s not necessary,” he said. “Look at the Design District. It was organic. Men and women who were trying to invest in the area, they bought stuff and they worked with what they had and they built it up and it was a process. It wasn’t just like, ‘slap down this massive development.’ That never goes well.”

You have to admire Wolfson’s moxie. But unless he gets enough signatures, it seems like Miami Beach will move forward and decide which billion-dollar plan is better for the city, even though it probably isn’t.