When a State Doesn’t Realize Its Best, City-Level Assets – Next City

When a State Doesn’t Realize Its Best, City-Level Assets 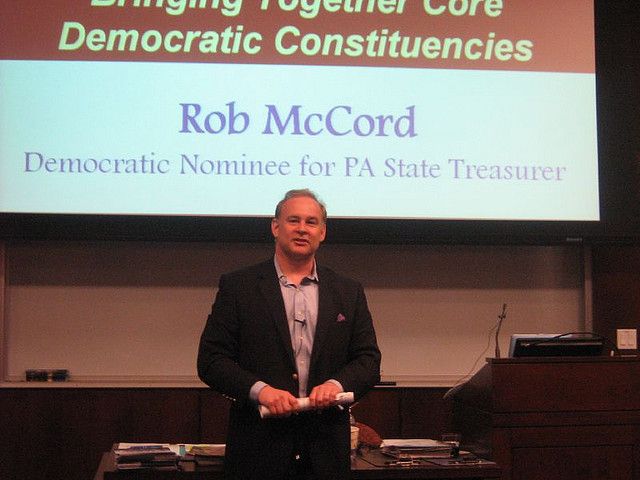 Pennsylvania Treasurer Rob McCord wants to see his home state take a smarter approach to securing returns on investments in its best assets — many of which can be found in the Philadelphia metro area. That likely explains why he’s taken it upon himself to run for governor in 2014.

We caught up with McCord at the today’s Legacy and Innovation conference at the University of Pennsylvania to talk about home energy loan programs, how talking points get in the way of good investment, and every Philadelphian’s favorite transportation authority.

Next City: As Treasurer, you’re looking at Philadelphia’s economy from the perspective of Pennsylvania at large. What do you think the state can do help cities like Philadelphia and Pittsburgh make better use of their resources and public assets?

Rob McCord: One of the things we’ve done at the Treasury is invent new financial instruments and investments that take advantage of the way new technologies, and proven technologies, can pay for themselves very rapidly. We have something called the Keystone HELP program — the Home Energy Loan Program — and what it does is encourage middle-class homeowners to do energy audits on their aging homes. They are then encouraged to reduce their carbon footprint, and also reduce their utility bills, through upfront investment.

Many of these homeowners don’t have $15,000-$20,000 lying around. What we’ve done is invent a debt instrument where they get granted the debt. It has a 99 percent payback rate, and it’s been a high-yielding fixed-income instrument. We’ve created a secondary market for it, because that would be another concern. This has created jobs, improved the environment and reduced the costs of the bills that people face around their kitchen table.

NC: You were able to do this unilaterally as state Treasurer?

McCord: Aware of the admittedly limited capacity of the Treasurer alone, we asked where else we could do this. We realized that some of the state-related higher education institutions had access to investment capital to do this kind of thing. Because if these investments pay for themselves in two or three years, your return on investment for basically purchasing the energy you never use comes very fast. It costs much less to buy down your energy bill than almost any other kind of investment you could imagine, especially when you’re replacing something that is worn out.

And Pennsylvania is exceptionally rich with private sector non-profit colleges and universities. We’re running a similar experiment with Drexel, where we give them a type of off-balance sheet instrument, a public-private partnership where we invest in a private equity firm that applies proven technologies and is paid back through the energy bill. All they see is a bill that starts out at the same level and then goes down over time. That bill basically pays for capital improvement to their building without them taking out any debt or weakening their balance sheet.

NC: One of the Philadelphia region’s most valuable public assets is its large rail transit network. SEPTA recently warned that it would have to cut nine out of 12 regional rail lines if new funding didn’t come through, and this doesn’t appear to be political posturing. Do you think the problem is that there’s no regional funding option for operations?

McCord: Exactly. You have a lot of people governing by talking points who became nervous that by holding the line on the state income tax, they would increase taxes at the local level. What they’ve actually done is shift the burden to an off-balance sheet debt that comes down the road. If you have an asset and you neglect it for so long, you’ve squandered the asset. The actual cost of fixing roads and bridges rises by about $1 million a day. That’s according to the American Society of Civil Engineers, not the world’s most ideological group.

McCord: [Laughs] Sure, but just like with our pension liabilities, we’re failing to meet obligations that are implicitly borrowing, except there isn’t an evident bond issue. So you have all these instances in the Commonwealth of Pennsylvania where people are governing in a fiscally irresponsible way for the sake of talking points.

What’s sadly been happening in Pennsylvania is the defunding of public education, going off the formula at the state level, and the city is being forced to come up with local revenue just to fund education. That’s coming at the expense of other basic investments in services that could yield a return, and we’re seeing this downward spiral. We need trustworthy leadership at the state level that understands an investment that yields a return, and an appropriate sharing of both benefits and burdens. Too many look at the electoral map instead of where investments can offer state government a return. They see no votes in that corner of the Commonwealth, so to heck with ‘em.

NC: Even though the Philadelphia metro contributes more to state GDP than any other region.

McCord: Statewide politicians are not going to lose any votes for ignoring Philadelphia, but in the long run the state’s going to lose revenue because you’re cooling down a major part of the economy that pays for a lot of the functioning of the Commonwealth. It’s penny wise, pound foolish, but it’s politically driven, and it isn’t seen as an allocation of resources that will yield a near-term political return in time for the next election cycle.

NC: What’s an example of something the state could do to get out of the way of metro-level innovation?

McCord: I think it would be useful to open the dialogue between leaders from both parties to brainstorm ideas for strategic investments that might drive down expenses at the state and metro level. We can’t let the perfect be the enemy of better. But there’s almost no return-on-investment conversation going on.

NC: Some people think all government spending is just like burning money.

McCord: Exactly. Sometimes the goal is to set aside some resources to increase fairness, or try to just do the right thing. But that’s a separate bundle of conversations from public investments, and leveraging resources on investments that pay for themselves many times over. We should be going to leaders of all four caucuses in Harrisburg, the Democrats and Republicans in the state House and Senate, and get a long list of the things they think we could save money on. Are there innovations, consolidations we could pursue?

Legacy and Innovation is a day-long symposium at the University of Pennsylvania focused on strategies that allow cities to re-imagine and repurpose their assets, from using narrow streets to foster walkability to turning energy systems into spurs for economic development.