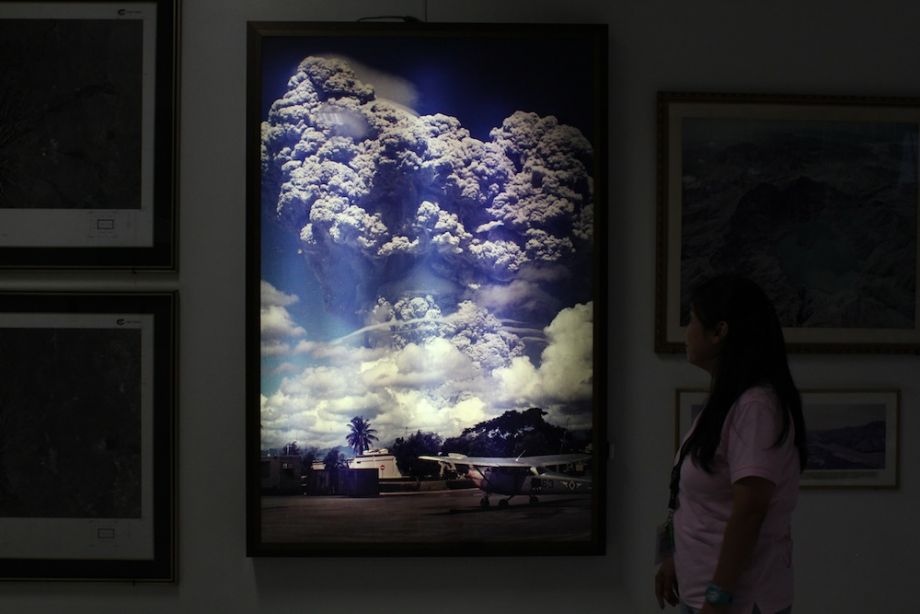 Mylene Villegas stands next to a photograph of Mt. Pinatubo, which erupted in 1991 and 847 people in the second-largest volcanic eruption of the 20th century. Photo credit: Aurora Almendral

Manila is in a precarious place. Besides being in the path of annual monsoons, floods and typhoons, there’s an active volcano currently spewing sulfur an hour’s drive away, and five fault lines that could cause serious destruction if one should slip. One of those fault lines is actually an underwater trench, the kind that could trigger a tsunami. Another, the West Valley Fault line, cuts though some of the most densely populated areas of Metro Manila. Historical estimates suggest that activity on this fault occurs a little less than every 500 years. It’s been 400 years since the last earthquake, so the next one could hit anytime.

The big question is, what will happen to Manila when that earthquake hits? The Philippine Institute of Volcanology and Seismology (Phivolcs) has created an interactive map that answers exactly that question for the public.

The map is fascinating (or frightening, if you live here) to play around with. Users can select from a menu of Richter scale scenarios to find out how much damage their area of the city would sustain. You can, for instance, see how many life-threatening injuries would likely occur in your neighborhood should a 6.5-magnitude earthquake hit, or the estimated number of fatalities that would be caused by a 7.2-magnitude quake.

Phivolcs’s recent study, which is currently being updated with more high-resolution maps, found that the Valley Fault’s next earthquake would likely be stronger than a seven on the Richter scale. Citywide, an estimated 34,000 people would die from such an earthquake, 117,000 buildings would collapse or be otherwise damaged, and another 18,000 people would likely die from the fires that would engulf the city in the immediate aftermath.

At the conference room at Philvolcs, the walls are papered with large printouts of hazard maps highlighting the areas that would be decimated by ground shaking, liquefaction — which is when sandy earth wiggles like liquid during a quake — or ground rupture, which is when the earth actually breaks apart along a fault line. In topographical maps shaded with soothing earth tones, Manila is divided into areas that can expect very strong to devastating effects. Most of Manila is shaded in safari beige, which a little pocket-sized cartoon guide tells me indicates a level eight (out of ten) on Philvolcs’ earthquake intensity scale, or “very destructive.”

The last time an earthquake, from a fault a couple of provinces away, was felt in Manila was 1968, long enough ago that many people don’t remember it. Part of Mylene Villegas’s job as chief science research specialist for Philvolcs’ Disaster Awareness and Preparedness Division is convincing leaders of local government units that investing in earthquake preparedness is necessary. One of the ways she does this is by showing security-camera footage from other earthquakes. She hits play on some footage from a convenience store in Japan, and we watch as boxes of cereal and cigarettes fly off the shelves, tables get knocked over and people freak out before ducking for cover.

“And this was Japan,” Villegas says. “They were really prepared.”

I asked her where is the last place a person would want to be when the big one hits. “Even if you’re not on the Valley Fault line, all of Manila will be affected,” she says. Meaning the last place anyone would want to be during an earthquake in Manila, is Manila. If that can’t be helped, then the worst place would be an “unstructured house,” like every home in Manila’s heavily populated slums.

But mapping has its limits. During Typhoon Haiyan, the coastal areas that suffered the most deaths had been mapped. Scientists had predicted which neighborhoods would be swamped by water. They passed along the information, but it didn’t inspire action, and thousands died. Villegas and Philvols are only in the position to provide information about the devastation that can happen in an earthquake, and it will be up to others to make sure people are ready. The disturbing conclusion is that, no matter how much research is done, we won’t know how prepared Manila is until after the earthquake has hit.