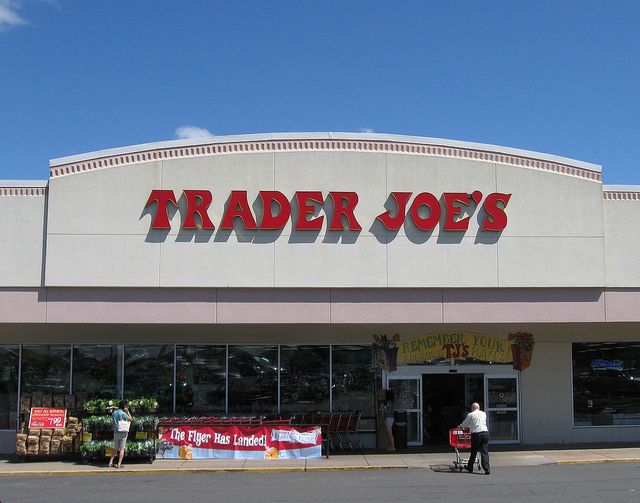 Whole Foods’ recent push into underserved neighborhoods in Detroit, Newark and other high-poverty cities has been met with equal parts backlash and applause. There’s no denying the Austin grocer’s business savvy with the press-friendly tactic, but the move beyond the grocer’s upscale comfort zone also undoubtedly serves a public need: Getting fresh produce into neighborhoods that need it.

Which got us wondering, why isn’t Trader Joe’s, your favorite purveyor of $2 wine and frozen ravioli, setting up shop in lower-income neighborhoods?

We located all the Trader Joe’s in major urban areas across America and identified median household income and percentage of households on SNAP in those respective ZIP codes. In the graphic you can compare the median income of an area surrounding a Trader Joe’s store to that city’s median income. We’ve added five of Whole Foods’ newest stores in high-poverty neighborhoods for comparison. (Keep in mind, several of these locations are still in construction phases and won’t be opening for another few years.)

For both grocers, the store locations, as you can see in the infographic, skew to the affluent. But while Whole Foods seems to be taking steps to remedy that, Trader Joe’s — with that reasonably priced pumpkin muffin mix perfect for Thanksgiving — continues to open shop in ZIP codes with above average median incomes and very small percentages of households on SNAP.

Now, it’s worth mentioning that the footprint of a grocery store obviously stretches well outside its ZIP code. Families from the Bronx can shop at the Trader Joe’s in Union Square, where there are trains to every part of New York. But it’s human nature to do the bulk of your shopping at the most convenient store, which tends to be close to home. This is especially true in cities, where carting groceries around is a pain.

We called Trader Joe’s repeatedly to ask about the footprint of their stores but they declined comment. “We don’t talk about our business practices or real estate practices,” a spokesperson said when asked if they had plans to move into lower-income communities. “We’re a privately held company anyway.”

Some question the intentions of upmarket grocery chains opening stores in underserved neighborhoods. But Parke Wilde, an associate professor in the Friedman School of Nutrition Science and Policy at Tufts University, sees no harm.

“Doesn’t offend me the way it offends some people,” Parke, who published his first book, Food Policy In the United States this March, said. “I think it’s good for middle income people in mixed-income neighborhoods to have access to a good retailer. And I think it’s a good resource for low-income people on the occasion that their back isn’t against the wall, or on the days that the paycheck comes in, or SNAP benefits are sufficient to allow a little extra purchase of fruits and vegetables. It’s also worth pointing out that Whole Foods prices packaged foods very high but bulk foods at a competitive price point.”

Wilde is right about Whole Food’s produce, which is priced similarly to local grocers. But Trader Joe’s, with their affordable prepackaged foods and produce could conceivably make healthy shopping much cheaper in the neighborhoods that need it most.

“It’s going to make more fresh fruits and vegetables and more generally healthy foods available in some of these markets that have been really underserved for a long, long time,” David Just, associate professor at Cornell University’s Food and Brand Lab, told me. “When it comes to Trader Joe’s, you could actually do pretty well with food stamps there.”

Champions of local business will ask, why not local grocers? They know and understand the community. But there’s less inherent risk for corporations than there is for small, locally-owned stores. They have deep pockets and institutional support.

And besides, that brand recognition can help soothe some residents’ anxiety about buying healthier foods. “These grocers end up doing a much better job of marketing healthier foods,” Just said. “It already has a language that people can understand.”

Trader Joe’s is free to do what they want. They’re a private company, as their curt spokesperson shot back. But, like it or not, urban cores across America are working hard to get grocers to bring healthy options into food deserts. We say this time and again: Business has been good for Whole Foods, but the optics are even better. When will Trader Joe’s bring their affordable prices to the neighborhoods that need it?