In Search of a Town Center – Next City

In Search of a Town Center 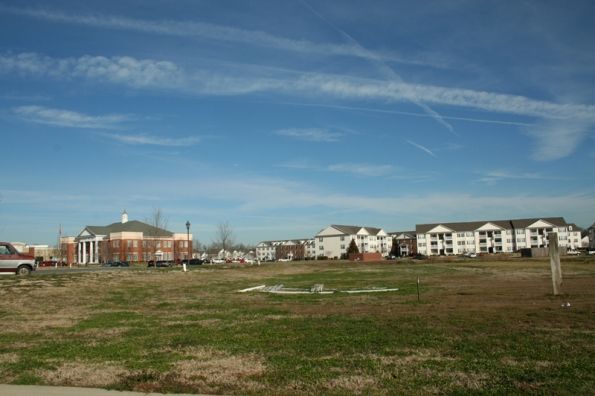 Driving east on busy North Carolina Highway 49 through Harrisburg, the scene is repetitive.

This massive building greeting the highway’s 40,000 daily travelers is Harrisburg Town Hall. It is the centerpiece of the town’s first attempt at main street development, the Harrisburg Town Center.

The Town Center, now more than a decade old, is a 97-acre development in the Charlotte, N.C. suburb of 11,000 people four miles east of Interstate 485. With scattered retail, 373 compact town homes and 17.3 undeveloped acres, the project remains incomplete.

Harrisburg served as a rural railroad hamlet for the booming U.S. rail system from the 1850s until the construction of N.C. 49 in 1923. During the next 70-some years, a sprawling collection of subdivisions and retail developed around the highway, leaving the town without a center.

In the 1990s, a developer’s wish to build that center dovetailed with a similar town goal and the Harrisburg Town Center was approved. Mark Swartz and Bob Burkett of J&B Development proposed to turn what was then farmland into a walkable, mixed-use community with a Main Street, offices, stores and homes.

“As a small-town planning concept, the Town Center was a good idea,” said Tyrel “Tink” Moore, a UNC Charlotte geography professor who has lived in Harrisburg since 1996 and sat on the town’s Planning and Zoning Board during the project’s approval. “But that it wasn’t more successful has probably made it look less like a good idea.”

Today, the first-floor windows at the Town Hall overlook three acres of Main Street property filled not with stores or buildings, but grass. Customers tend to drive, not walk, from shop to shop. And on the center’s busier weeknights, visitors can struggle to find an open parking space.

“We’ll walk from Town Hall to the Chinese place up on the corner for lunch, and we’re the only people on the sidewalk,” said Joshua Watkins, Harrisburg town planning director. “I don’t think this matches the initial intentions of the Town Center.”

The decade since the Town Center’s groundbreaking has brought rapid population growth — Harrisburg grew 156 percent from 2000 to 2010 — and a brutal economic downturn that has all but stopped commercial development throughout the Charlotte urban region.

Merchants who were interviewed — none wanted their names used — described thriving business in some instances and struggles in others.

Although the Town Center developer says he considers it well-positioned to take advantage of commercial opportunity, even critics of the Town Center’s design recognize the difficulty for any project to show much growth under today’s economic circumstances.

However, critics say the project was flawed from the start in terms of expectations and execution. Some even wonder whether the original “main street” vision has been so altered by decisions and compromises that it should be abandoned.

David Walters, a UNC Charlotte professor of urban design, thinks several design flaws in the Town Center have prevented it from becoming a true downtown-like project.

If one of his students presented the Town Center’s initial design to him in class, Walters said, he’d give that student an “F.”

“It has failed because it’s over-grandiose,” he said. Walters said the development’s large size and poor phasing plan prevented the developer from creating successful street-level retail.

The Town Center’s two collections of main street services and retail sit a half-mile apart. The first collection is filled with several restaurants, independent retailers, salons, fitness centers and a coffee shop, bank, laundromat, orthodontist and dentist. An Aldi grocery store and Bank of North Carolina on the south part of Main Street make up the second, much smaller collection.

Town Hall and an undeveloped three-acre lot owned by Novant Health divide these collections, creating a five-minute walk for anyone wanting to shop at both. Walters says this is, technically, a walkable distance but doubts the layout is convenient enough for visitors to use.

“If I’ve parked here and I’ve got an armful of clothes to take to the dry cleaners, am I actually going to walk with clothes over my arm all the way over there? Probably not,” Walters said. “You hop in your car and drive.”

Walters also said Harrisburg, even with its recent population boom, could never support the 51 acres of retail zoning in the Town Center. “It’s very market unrealistic,” he said.

Developer Mark Swartz understands Walters’ criticisms but thinks they are too idealistic. Swartz said the concept behind the Town Center has never changed, and that designers’ plans don’t always match the reality developers face.

“It’s not always feasible. You can have the best planner come in and say this is what you need to do on this 100 acres of land, but you have to find businesses that are willing to come at that time in the style of building you’ve built,” Swartz said.

The developer used the vacant lot across from the Town Hall as an example of how the market dictates construction. Novant Health, which owns 13 hospitals throughout the Southeast, bought the 3.3 acres in 2007 intending to build a medical center. Today the health care company has yet to break ground.

“I can’t control that. They own the dirt,” Swartz said.

Parking is another issue on which critics and the developer disagree. Urban designers such as Walters say that too much parking around stores and restaurants encourages people to drive, not walk, and helps add to traffic congestion. He thinks the Town Center has too much parking, and that keeps it from functioning like a traditional main street.

Walters concedes it’s hard for developers to get financing without a lot of nearby parking, but thinks there is enough on-street parking in the Town Center to offset the need for vast parking lots.

“Look how wide the streets are. There’s so much parking on the streets,” he said.

Swartz said limiting parking is not realistic. “If customers can’t pull up, get reasonably close to you and be able to walk to you or drive right up to your front door you’re wasting your time,” he said. “There’s never too much parking. There’s no such thing.”

Joshua Watkins, who became Harrisburg’s planning director in 2007, feels the developer and Harrisburg’s Planning and Zoning Board have “shifted” priorities away from their original concept of a walkable community.

He fears that design guideline exceptions approved over the last decade have deepened the divide between what the Town Center was supposed to be and where it is today.

“It’s a little bit of a double standard that has been set,” he said.

One exception that concerns Watkins is the Ruckus House Learning Center, next to N.C. 49. The childcare center, built in 2005, features crooked windows with brightly colored window frames and a fanciful, blue entryway. Watkins argues the architectural look is not consistent with the Town Center’s overall feel.

Watkins also pointed to an exception the Planning and Zoning Board made to let the Bank of North Carolina have perimeter parking on Main Street. Walters said it’s another way the Town Center’s design is encouraging driving instead of walking.

Swartz thinks criticism about guideline exceptions is unfair. While he understands the need for standards and zoning, Swartz does not believe it is the government’s job to enforce rigid architectural standards on local businesses.

Asked about the future, Watkins, Swartz, Moore and Walters all offered different opinions. But this divergence of views reflects a similar discussion amongst the town’s residents. With plenty of shopping available in Charlotte and Concord, Harrisburg residents must decide whether they want to continue development as usual or work to make the Town Center a true, mixed-use community.

Watkins said when the project began there were two contingents in town. “There was the ‘I’ve lived in Harrisburg my entire life, I’m tired of driving to Concord or Charlotte to get anything — let’s develop the town’ contingent,” he said. “But then there were the transplants that maybe lived here eight to 10 years, moved here from somewhere because of the small-town Mayberry feel. Those folks were saying ‘I’m here. Lock the gates, nothing else.’ ”

Watkins thinks the Town Center should continue its mixed-use mission. He said bringing in an anchor or large retailer under the original design guidelines would spur development and support the Town Center concept.

In Walters’ opinion, it’s time for the Town Center to abandon its mixed-use hopes and determine what best fits Harrisburg. “You would have to have a revision of the development plan to drastically reduce the amount of retail and probably look to boost office, instead, and to add more housing,” he said.

Swartz sees no urgency or need for new strategy and thinks the Town Center is ripe for development. He said the project has no debt on any property or infrastructure improvements.

“We don’t have a bank looking over our shoulder for these parcels,” said Swartz.

Swartz said the fact that the Town Center is debt-free and already has its infrastructure in place creates a unique opportunity for rapid construction.

“In some developments it could take a year just to put the shovel in the ground. Here it can be a matter of weeks,” Swartz said.

Moore, the town planning professor who has lived in Harrisburg since 1996, thinks the development started as a great concept and, despite expressing a few frustrations with design guideline exemptions, attributed many criticisms of the Town Center to human nature.

Moore thinks it is too early to write-off the Town Center and that a revived economy could bring the development new attention.

“Five years from now, when the economy builds back to what it was — which it better — well, we might see another round of development,” he said.