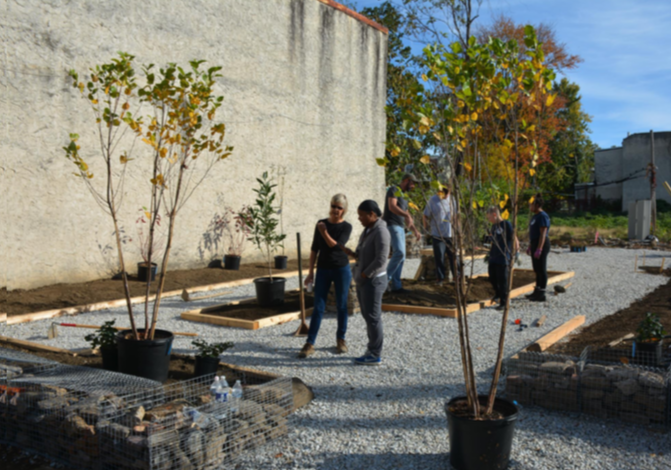 There’s something new on the corner of 38th and Melon.

In Mantua, a quiet neighborhood of Northwest Philadelphia, a once overgrown lot is clear. Sturdy shrubs and saplings line the north wall. Wooden benches group around stocky, square-cut tables, framed by grass and gravel.

It’s all part of the proof-of-concept for a new program called “Park in a Truck,” meant to fast-track green space development across the city — by putting the authority and responsibility for that space in the hands of community members.

“The idea grew out of frustration on my part,” Kim Douglas, director of Thomas Jefferson University’s landscape architecture program in Philadelphia, says, “because people say they want green space. They want places to meet their neighbors, drink coffee, play chess. [But] we could not get parks built, either because the city wouldn’t sign off on the lot, or because we didn’t have any money, or the community outreach is difficult to do… and I thought there had to be a better way to get these things done.”

Douglas wanted a quicker, simpler, more cost-effective way to build an urban park. So she and colleague Drew Harris, a professor of public health at Jefferson, began to brainstorm.

Approximately 40,000 vacant lots are scattered across the city of Philadelphia; averaged out, that’s more than 280 lots per square mile. Douglas and Harris reasoned: Why not use some of those lots? “That’s 40,000 opportunities for us to create new [green] spaces.”

In June 2018, Harris and Douglas published an article in the Philadelphia Inquirer detailing their findings. Within weeks, they’d received an avalanche of responses: City agencies, neighborhood organizations, real estate developers, and potential funders reached out with location suggestions and offers of support. In months, the two had developed Park in a Truck.

“The Park in a Truck idea is simple: Give local residents the resources and training to design, build and maintain parks on unused land in their own neighborhoods,” Douglas and Harris wrote in a followup article. “They decide whether it’s a place to grow vegetables, a setting to show off local art and culture, a space for child play, or simply a green place for rest and relaxation.”

Here’s the gist of the model: First, local residents discuss the potential park and select a design that meets their needs. Second, materials are loaded into a truck and delivered to the site. Finally, neighborhood volunteers build, maintain, and enjoy their new green space.

The entire park is constructed on top of the ground, without fencing, footings, or foundation required. That means that there are no permits or special licensing necessary; anyone can assemble the pieces. The benches and tables are simply constructed — so are the plant beds and the red gravel walkways. “It’s a kind of construction that anybody can do,” Douglas says.

What is new is the “IKEA, but for parks” approach that Park in a Truck is advocating.

“It’s easy, sort of preassembled … you look at the options, you say ‘I’ll have an Art Park,’ you get a box, and you bring it to the site,” explains Douglas. “[We] provide what I call ‘puzzle pieces,’ these interchangeable park components that people can mix and match and organize.” 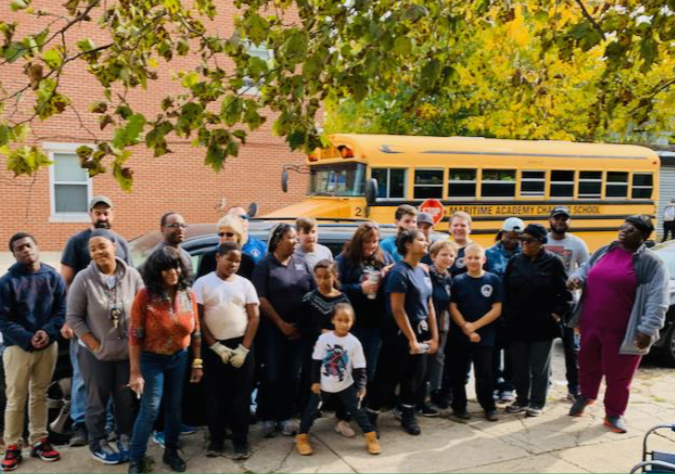 The neighborhood crew (Photo by Richard Newton; courtesy Park in a Truck)

But even if the park itself was ready to be fast-tracked, the work of planning and gaining community approval needed to go slow. That’s in part because the property in Mantua didn’t begin as a fully vacant lot. In fact, since 1992, it’d been functioning as a garden.

“I had everything out there,” says Camille Marion, who has lived in the house next to the Mantua lot for nearly 30 years. The garden, she explains, was originally hers. “I had roses and fruit trees, had grapes growing, all types of flowers. And I bought my own equipment to do the garden work: lawnmowers, tillers. Everybody down there knew what I did… family and friends, people came over and I cooked in the back. It was overflowing. It was beautiful.”

Old images of the property show a wire-fenced lot bordered by lush, overgrown trees that crowd out any view of the garden Marion describes. But when Douglas and Harris proposed a new vision for the space, she says, she was skeptical. “These was outsiders, not people from the community, and our community liked it like it was at first … then they started going to the meetings, and I got to thinking, sometimes change is good.”

Like Marion, many neighborhood residents were initially skeptical about what “outsiders” were planning. Because the Park in a Truck model relies heavily on community buy-in, that was a problem. To fix it, the program needed to deliver two things: engagement and consistency.

First, engagement. “The biggest thing for us was including the community by letting them be a part of [the planning process],” adds Teddy Pickering, one of Douglas’s students and the landscape construction manager of the Mantua park. Last summer, he and the rest of the Park in a Truck team installed a set of benches and bushes kitty-corner from the Mantua lot, with a sign describing their project and asking for community input. “We put up a suggestion box and people would leave notes about what they wanted,” Pickering says. “Some stuff was reasonable, some stuff was – not,” he laughed, “but it’s good to let them know people are listening, and that their voice matters.”

And second, consistency. “I was told in the very beginning that if I was going to work in Mantua, I had to bring everybody to every meeting, and it had to be consistent, and I just had to keep showing up,” Douglas said. “So that’s what I did.”

For Pickering, it was more about being on-site regularly. Last year, he says, “I was always doing something at the park. For the mock-up over the summer, I would go back two or three times a week and water, make sure that things weren’t dying, pick up the trash, you know.” Gradually, Pickering and his pit bull, Ace, became neighborhood regulars. “People all day would stop and ask what [was] going on,” he recalls. “It got them out there, talking. It created this kind of common area for people to come out and socialize.”

Even so, when the Mantua project finalized its designs and began construction that fall, Douglas wasn’t sure who would help out. “I never had any head count,” she says. “Every Saturday my students [and I] would come out here at eight o’clock with coffee and bagels, and we had no idea who would show up, if they would show up.”

But they did. Neighbors would stop by, ask questions, offer to help, and then stay for hours. The project was completed in November, after approximately six weekends of building — an incredibly quick turnaround for construction of a public park

That doesn’t mean the Park in a Truck model is perfect. “We’re constantly changing it,” Pickering says. “It’ll probably always be evolving, just because it’s really complicated to figure out a set of parks that can be placed in various designs.” The initial park in Mantua was funded by a grant from the Greenfield Foundation, but this coming spring, the program is expanding to build three new projects with additional community and donor support: one in lower North Philadelphia, one just west of the Schuylkill, and another at Catharine Elementary in Southwest Philly. The team envisions a network of public parks within blocks of one another, closely connecting communities within and among those spaces.

Alongside that change, they’ve finished the Park in a Truck user’s toolkit: a step-by-step guide on evaluating possible sites, building the park elements, selecting furniture, and designing a layout, meant for the average resident to understand and recreate. “My hope is that the tool kit will enable people to facilitate their own designs, build their own parks in any neighborhood and in all different sizes,” Pickering says. “At the end of the day, everybody deserves a nice outdoor space.”

In the meantime, there’s still work to be done on the original Mantua property. Since it served as a prototype for the larger Park in a Truck program, it’s not fully finished; the neighborhood hopes to see it completed this spring, with an adjacent community center finished later this year.

There’s also the question of the park’s long-term sustainability. Douglas hopes to find funding to hire and train high-school-aged “Park Ambassadors” to maintain the green space, plan programming, and act as community connectors in their neighborhood. In the meantime, she’s thrilled that the local residents are using the park and beginning to claim it as their own.

One of those residents, at least, is satisfied with the way it looks — for now. “It looks nice and it’ll do,” Marion says. But, she adds immediately, “if you’re gonna do it, do it right, no half-stepping. There’s things still that need to be done.”

She rattles off a list: better fencing, signage, brighter lighting. Maybe a wheelchair accessible ramp, and an arch over the entrance, “real decorative, you know… maybe a name on that arch, too? Marion’s Park?”

After all, the park may have been trucked in by outsiders. But it belongs to the residents of Mantua.