How to Design a Street for Hands-Off Play – Next City

How to Design a Street for Hands-Off Play 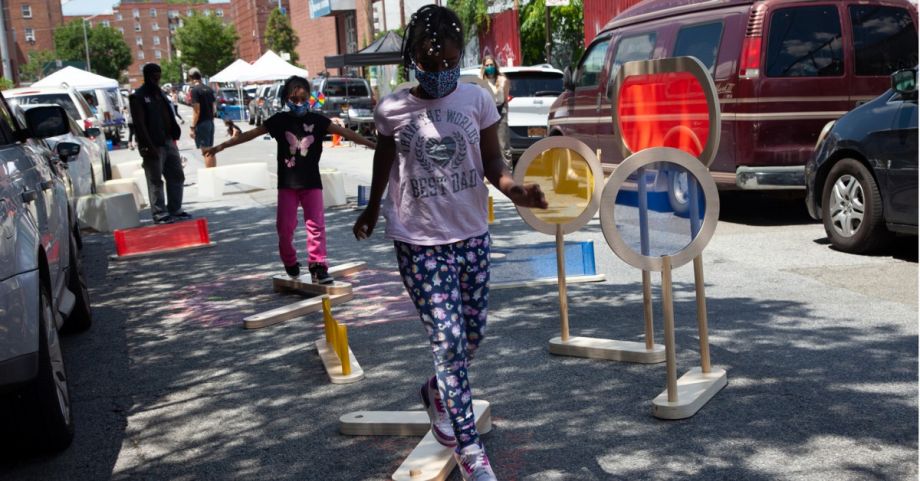 It is a hot and humid Tuesday in Red Hook, Brooklyn, but a few brave children have come out to play. Stretching along a segment of 9th Street, between Hicks and Henry, a colorful obstacle course welcomes its first guests for the day. A little girl hops over the hurdles, hand in hand with her mother. A young boy follows suit, surgical mask strapped around his face and wet Crocs squeaking from the open fire hydrant across the street. It is 1p.m, and the Red Hook Open Street is open for play.

Play streets — an intervention that helps increase outdoor play by temporarily closing designated public streets to traffic — are a long-standing tradition in New York City, but the pandemic has put them at risk. Last month, Mayor Bill de Blasio brought a little bit of them back with a new initiative aimed at providing families with safe, structured activities in the wake of COVID-19. The revamped Play Streets initiative builds on Open Streets — a program that allows pedestrians and cyclists to use the roadbed of the street to allow for greater social distancing — and includes programs like giant board games, reading corners and sports for children. As a part of Play Streets, New York City-based organization Street Lab has even re-invented the obstacle course to allow for social play in a time of social distancing.

Street Lab, a non-profit that creates street furniture and programs for public spaces, is well acquainted with social play. Since 2011, the organization’s pop-up programs have been transforming plazas, parks, streets and awkward corners into spaces for learning, drawing, building and playing. But when the pandemic set in, they had to rethink their programming from the ground up.

“It used to be a lot of shared materials,” says Leslie Davol, who co-founded Street Lab with her husband, Sam Davol. Before the pandemic, activities included building with Legos, collective reading, and typewriting. The new safety requirements for social distancing have made all that impossible. So Street Lab launched PLAY NYC, a program that supports safe, hands-free play for children in high-need neighborhoods. The set-up includes a no-touch obstacle course, exercise activities, and learning experiences in low-income neighborhoods from Bushwick to Red Hook to East Harlem.

“We tend to prioritize locations that are underserved, even with Open Streets,” says Leslie. Instead of going to busy streets like 34th Avenue in Jackson Heights — an Open Street that has recently garnered a lot of attention — Street Lab focuses on less frequented locations, from public spaces like the softball court at Bushwick Houses, to an Open Street near NYCHA’s Red Hook Houses. Results vary from place to place. “Some neighborhoods have a tradition of multi-generational gathering,” says Sam. In East Harlem, play streets have been a tradition since 1914. On East 101st St, a recent restaurant street run by Uptown Grand Central, the atmosphere is buzzing.

At the Red Hook Play Street, for which Street Lab has partnered with the Red Hook Initiative, PLAY NYC has been a little slower to take off. On that sweltering Tuesday afternoon, only half a dozen kids are present. “Since the pandemic set in, people are more wary, they leave the house for specific reasons,” says Leslie. “At this moment, it’s important to occupy the streets so people notice.”

This is where design comes into play. “Kids have been drawing obstacle courses forever,” says industrial designer Hannah Berkin-Harper, who drew inspiration from the obstacle courses she draws for her own 6 year-old daughter, then made it three-dimensional.

Unlike seesaws or climbing structures, the obstacle course provides a fun activity without the high-touch surfaces. “One of the interesting things about the obstacle course is that kids make up their own rules,” says Berkin-Harper, who tested the structure on her driveway with her daughter. At Van Dyke Houses in Brownsville, the balancing beam was declared too easy and the floor around it was chalked into lava. “What happens changes based on how grown-ups set it up, which is flexible because the street conditions change all the time.”

The fluctuating environment made modularity a key component of the design process. The obstacle course is a kit of parts where plywood provides the structure and nylon awning mesh adds texture and a touch of color. A set of side barriers is placed along the edge of the obstacle course, to define the space while leaving room for passers-by. “We wanted to avoid visual references to police barriers,” says Berkin-Harper. Everything is easy to source and easy to replace. “More dowels can be cut, everything comes apart and can be reconfigured in different situations,” she says.

Naturally, the process relies on trial and error. “It’s hard to design for pop-ups compared to playgrounds that abound with regulations,” she adds. “What you can plan for is to use materials that are lightweight, so if they get knocked over, they’re very light.” But finding the perfect balance between sturdy and knock-down is challenging. At first, the side barriers were too light, so a cross-plank was added to balance the weight. Conversely, the mist house — a house-shaped skeleton made out of connected pipes that support misting hoses — was too heavy and collapsed within the first hour. The team is now working on an improved version using smaller diameter pipes with added cross braces and wood planks at the foot of the structure.

The mist house is somewhat helpful with cooling, but in barren streets like Red Hook’s 9th Street, shade remains a problem. Berkin-Harper, who will be teaching a design-and-build course about Play Streets at Pratt Institute this fall, hopes to engage her students to come up with smart solutions for shade, seating, cooling, and multigenerational set-ups.

Street Lab is already thinking about catering to multiple generations. Their new street marking kit, designed by Design Across Scales Lab at Cornell AAP, is another step towards a new program that re-imagines how New Yorkers can come together safely. Complete with a protractor, chalk holders and a string, the marking kit is an ideal tool for social drawing while social distancing. “Play Streets are a beautiful concept,” says Leslie. “We’re trying to revitalize them.”

Since they were first invented, play streets have been on a steady decline. According to a 2015 New York Times article, there were only 15 play streets then — down from a peak of around 150 two decades ago. Historically, most Play Streets were administered by the Police Athletic League, an independent youth development organization funded by NYPD, but declining public money and a laborious application process have led to the slow disappearance of a summer institution.

Drivers have had something to do with it, too. “Car culture is our biggest challenge,” says Leslie, but Open Streets have opened up new possibilities. “The car voices have been consistent, but people are much more open than they used to,” adds Sam. “Restaurant streets have actually been a big step in that direction.” When streets close to thru traffic, the underlying conflict between businesses and parking is always present. Now, he says, restaurants are relying on Open Streets to stay afloat.

“Everyone is realizing that there’s a tremendous amount of real estate in streets and we could be more creative in using it,” says Sam. People are already taking advantage of reclaimed streets to do census outreach and food distribution. “They’re all Play Streets, they’re all Open Streets,” adds Leslie. “Let’s use them!”