How India Could Help Solve America’s Sewage Woes – Next City 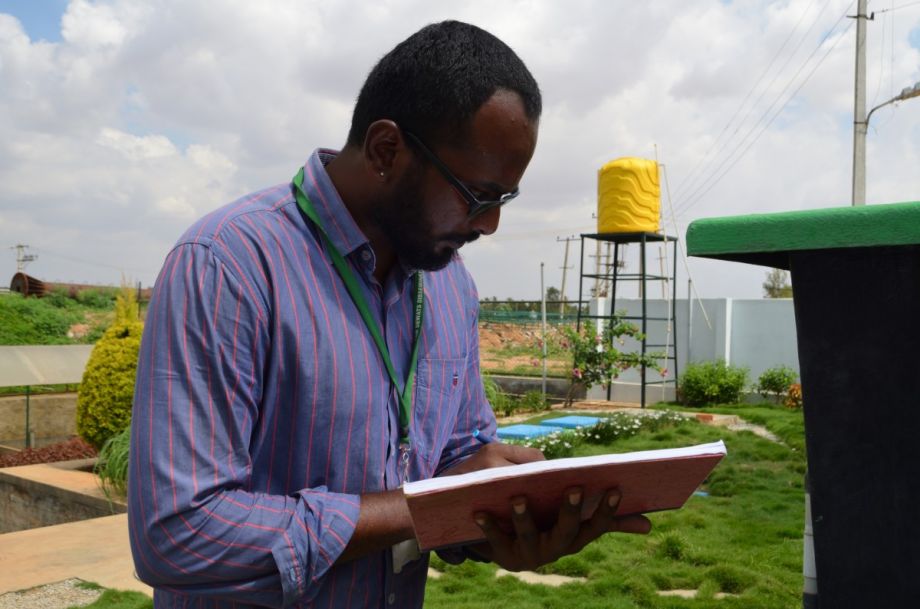 An engineer takes notes at the fecal sludge treatment plant in Devanahalli, a municipality on the outskirts of Bangalore. The plant was built to look like a garden from the outside to minimize residents' objections. (Photo: Alia Dharssi)

At first glance, the fecal sludge treatment plant in Devanahalli, a town of 30,000 at the edge of the growing boundaries of Bangalore, looks like a garden. A gravel path weaves through bright green grass with patches of flowers, bushes and short trees.

Look more carefully and rectangular, sky-blue plastic lids, at intervals amid the grass, come into focus. They cover underground tanks in which human waste brews into compost — with no perceptible smell and no use of electricity.

Special trucks, nicknamed “honeysuckers,” suck human waste out of latrine pits outside of nearby households and deliver it to the plant, hooking themselves up to a pipe that pokes out of a wall surrounding the premises.

Open since 2015, the operation is India’s first city-wide treatment plant for fecal sludge, which is the term for human waste that goes into on-site toilets or sanitation systems instead of sewers. At a capital cost of just under $94,000 (6 million INR), the facility and its trucks are pioneering a cheaper alternative to sewer systems for cash-strapped Indian cities and towns, which dump more than 70 percent of urban sewage untreated into India’s streets, waterways and countryside.

The idea is catching on. More than a dozen Indian cities and towns, including three in 2018 so far, have commissioned similar projects by the CDD Society, a non-profit that built the Devanahalli plant and focuses on decentralized wastewater treatment.

But India is not the only place where the approach is relevant. Concerns about water scarcity, sustainability and cost make decentralized treatment of human waste, which doesn’t need to eschew pipes or flush toilets, relevant worldwide. In fact, building more and smaller plants that treat waste more efficiently and cheaply than America’s traditional, energy-hungry mega-plants might just be the solution to sewage problems in the U.S. where officials are collectively facing a $1 trillion bill to upgrade aging water and wastewater treatment systems.

“It doesn’t really matter where you are on the planet right now — sanitation is a problem,” says Kim Nace, co-founder of the Rich Earth Institute in Vermont, which researches and promotes ways to turn human urine into fertilizer. “… What they’re trying to do with this facility in India and other projects like it is to manage waste in a new, different way. And I think we need to try it here too.”

Better sanitation is urgently needed In India, where about 1,000 children die each day because of unsanitary defecation practices. Even with a national push to get a toilet into every household, limited access to water, electricity and money put traditional sewer networks out of reach for most towns and cities.

Until recently, developing countries faced a choice between a full sewer system—miles of pipes and all—designed for water-hungry flush toilets, or nothing, says Madhu Krishna, who manages the Bill and Melinda Gates Foundation’s water, sanitation and hygiene initiatives in India. Now, the range of technologies for providing sanitation services are growing. Devanahalli’s plant was funded by the Gates Foundation as one example of an alternative. Krishna likens it to a touristic site for the sanitation sector, noting it’s been visited by more than 500 municipal officials and workers from India and abroad.

It is “an eye-opener” because decentralized treatment systems, which focus on treatment close to the source, typically aren’t covered in engineering and planning schools, says Krishna. The plant also provides a case study of social and political factors affecting such projects. In Devanahalli, the municipality and CDD worked on a regulatory framework, organized local “honeysucker” operators and sought public support before breaking ground, Krishna adds. “The treatment plant is the end result of a lot of other work.”

Beds for drying out fecal sludge in the process of turning it into compost at the fecal sludge treatment plant in Devanahalli, a municipality on the outskirts of Bangalore. (Photo: Alia Dharssi)

The basic principles behind centralized sewer systems and flush toilets — the gold standard in sanitation — haven’t changed significantly since being created. “The flush toilet is a very old appliance. It’s hundreds of years old,” says Nace of the Rich Earth Institute. “It did the job that we expected it to do when there were a billion people [in the world], but there are going to be nine billion. And using water as a transport device when there is such water scarcity and [consuming energy] to create clean, potable water [for toilets] and then to defecate in it, it’s so unsustainable. It doesn’t make any sense.”

Nace is concerned about America’s “crumbling infrastructure” for water and wastewater treatment, much of which was built with federal funds decades ago. Now, the burden for maintaining and upgrading the infrastructures fall on municipalities struggling to afford it. Many of these are communities of 50,000 or less that “don’t have the economic viability to be investing in these multi-million dollar treatment plants,” says Nace.

Centralized sewers do work well for many dense urban settlements. However, elements of decentralized models, including the focus on treatment close to the source and with fewer resources, have immediate applications in developed countries because they make for cheaper and more sustainable wastewater treatment. In fact, some places in the U.S. have already considered or are putting in place such alternatives. In Massachusetts, the Charles River Watershed Association is urging areas along the Charles River, which runs across much of Massachusetts to Boston Harbor, to forgo centralized wastewater treatment facilities for smaller community-oriented facilities that turn sewage and food waste into clean water, electricity and fertilizer.

Even so, the most instructive innovation is happening in countries like India that urgently need to treat human waste without as much land, water and money as developed countries, according to Alison Wood, assistant professor of environmental engineering at Olin College in Massachusetts. Testing new models at full scale is also cheaper in India than the U.S., which is critical because small-scale tests of wastewater treatment systems can turn out differently from large ones.

Wood likens it to baking. “If you make [a loaf of bread] five times or 10 times or 20 times bigger, and you try to cook it in the same way, the outside will cook, but the inside won’t.,” she says. “… What you really end up needing is a whole different cooking approach.” Full-scale tests of decentralized wastewater treatment technologies in cheaper countries like India could ultimately pave the way for their adoption in the United States.

But the success of decentralized treatment is about more than technology. In the United States, it would require a shift in mindset. “People think it’s great for the infrastructure to exist. They don’t want to live next door,” says Wood. When she did a survey in Cape Cod to study the viability of decentralized approaches there, one respondent told her that they would want $2 million for installing a composting toilet in their home. “You couldn’t pay me enough,” said another.

In Devanahalli, concerns about social pushback is why the garden plays a trick. It was grown so the facility looks more pleasant than what a passersby would expect of a treatment plant.

Alia Dharssi is a freelance journalist who writes about social and political issues with a focus on cities, immigration, women’s rights and global development.