How Houston Solved Its Rape Kit Problem – Next City 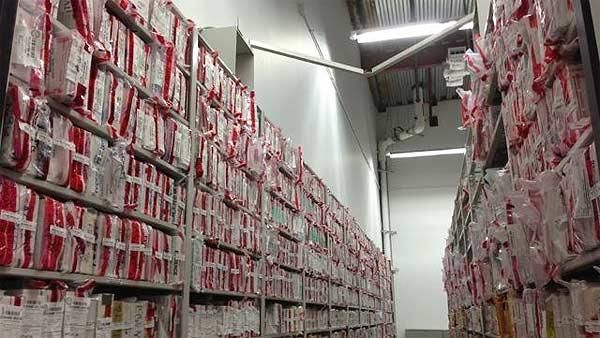 The FBI estimates that there are more than 400,000 untested rape kits across the country.

Valerie Neumann’s 21st birthday started out at a bowling alley in Erlanger, Ky. A friend of a friend bought her a celebratory drink… and then another, and then another. Later that night, as Neumann tells the story, she got sick and passed out. She woke up to find that acquaintance touching her. He did not stop when she told him no.

“When I woke up the next morning, my panties and the sweatpants were down around my ankles and my bra was undone,” Neumann told CBS in 2009. She immediately reported the rape — but three years later, there was still no arrest. The suspect’s attorney claimed he and Neumann never had sex, even though Neumann’s exam found “evidence of forced sexual penetration.” Her examiners completed a rape kit, taking samples of fluids and clothing to gather DNA evidence. The suspect provided a sample. But because Neumann’s rape kit was never tested, there is no confirmation of the suspect’s crime. He continued to walk free.

Authorities told Neumann that they couldn’t test her kit because it was too expensive, according to RAINN, where Neumann is now part of the speaker’s bureau. When CBS asked about it, prosecutors claimed that Neumann’s case was too “unwinnable” in court to warrant testing. Neumann came away, she said, feeling that “they didn’t do their job to protect me and to protect everyone else.”

To date, there are more than 400,000 untested rape kits across the country, according to the FBI. It didn’t happen overnight. The lack of public resources in the face of rapidly progressing forensic science, combined with the challenges of investigating sexual assault crimes, has led to piles of untested biological evidence in cities around the country.

In 2009 and 2010, this all came to a head when investigations by the U.S. Department of Justice, human rights organizations and local advocates outed police departments for sitting on hundreds of thousands of untested kits. Cities across the country found themselves labeled with horrifying numbers. Los Angeles had a backlog of 12,669 untested kits. Detroit discovered 10,000. In Illinois, Human Rights Watch found that about 80 percent of rape kits were never examined. In Memphis, about 8,000 untested kits still molder in storage.

There were 16,000 in Houston, a city that had just elected its second female and first openly gay mayor, Annise Parker. Empowered by stats from the Justice Department and bits of knowledge gleaned from Law & Order: SVU, residents began demanding that police and political leaders deal with the untested kits, some them decades old, that were sitting idly in the property room of Houston’s police department. More than 6,660 of the kits met DNA testing criteria. While the majority of these were from sexual assault cases, some were from homicide investigations.

Parker decided to take on the challenge. Now, as she begins her third and final term, Houston touts itself as one of the few cities in the country to have adequately met — and eliminated — its backlog of untested kits. “My hope is other cities around the state can learn from our approach,” Parker said at a recent news conference.

Cities well beyond Texas should also take notice. How, exactly, was Houston able to sort through thousands of untested kits, more of which came in every day?

For one, Houston wasn’t the only Texas city grappling with the problem. In 2011, a new law went into effect requiring every agency that receives a sexual assault kit to process it within 30 days. There were, however, no appropriations to support cities trying to comply with the law. Rather than wait for state support to appear, Houston built its own capacity with a $2.2 million grant from the National Institute of Justice. The city matched that amount with an additional $2.2 million from its general fund — something of a miracle, given that Houston, like most cities, faced tight budgets.

It was a hard-won victory that Parker managed to achieve with the support of other advocates on the city council, including Ed Gonzalez, currently a board member of the Houston Area Women’s Center (HAWC). Councilmember Wanda Adams is also “a strong advocate,” according to HAWC program officer Sonia Corrales. The core team got a boost in 2012 upon the election of Councilmember Ellen Cohen, former president and CEO of HAWC.

Backed with the support of political leadership, Houston used the $4.4 million to send untested kits to two outside labs for testing. Results began to come in earlier this year, and Parker said she expects testing to be completed in the next few months. One charge and one arrest have been made so far.

The police department views the progress as a major success, and the direct result of collaboration with Parker. Houston has been “very successful” in tackling the backlog, “mainly with the support of the mayor and city council,” said Matt Slinkard, Houston’s assistant chief of police. (He is also assistant chief of the department’s forensic division.)

Slinkard added that there “could potentially be more arrests,” though it’s important to remember that testing is only the beginning of the process. Information that comes back needs to be filed and checked against potential matches — which may or may not connect to named offenders — in the police department’s system. Following that, an investigation may need to continue before a case is closed. Slinkard also cautioned that DNA tests doesn’t always yield results: 30 to 40 percent will screen negative in the first phase of testing, meaning there’s insufficient biological evidence to go forward, and the process is concluded.

Houston’s work has helped encourage statewide progress on the kits. In part because of the city’s success, state Sen. Wendy Davis was able to help net $11 million in legislative appropriations to address the statewide backlog of 20,000 untested rape kits.

“The city of Houston is making remarkable progress in bringing victims of sexual assault closure, bringing perpetrators to justice, making our streets safer for families … and I’m pleased it is a stellar example of what a city can do when given the kind of partnership and resources that have been provided here,” Davis, a Democratic candidate for governor, said in an AP report.

But will Houston, or any other city that tackles its backlog, just pile up more untested kits in the future? What does it take to keep the problem from happening again?

Slinkard said the solution begins with understanding how the backlog came about in the first place. There are many reasons why a kit may not be tested. “It may never be required to be investigated by law enforcement because the identity of the suspect was never in question, or because consent is an issue, or because the complainant didn’t follow up,” he said. “It could be lack of resources. Science has come so far, and jurisdictions can’t always keep up.”

“There was a need to move more toward an independent model for forensics, for police, courts and so on,” Slinkard said. It is hoped that system efficiencies can keep up with the expense of processing evidence kits — which, as science advances, may grow more expensive before long.

As well, in early 2011, the Houston Sexual Assault Kit Task Force emerged, bringing together stakeholders from HAWC, the University of Texas-Austin and Sam Houston State University. Its task is to figure out why the problem emerged in the first place, and put together model protocols for cities nationwide.

According to Sonia Corrales at HAWC, the Task Force has resulted in increased transparency about the backlog from the Houston Police Department, and will help improve the way that sexual assault crimes are processed — not just by testing kits, but by improving coordination and training among departments as cases move from investigation to prosecution.

For cities looking to match Houston’s success, Slinkard said it all comes down to “capacity and resources.” If a city does not have the capacity and resources to meet its backlog while keeping up with current cases, “it will need to seek additional resources, whether through partnerships with outside labs, or by applying for grants very actively.”

On a basic level, he said, it’s crucial for cities to account for the evidence they already have — which, as in Texas, is now a legal requirement in many jurisdictions. “It might seem large and daunting,” he said, “but you have to take the first step.”

As cities make this a priority, Slinkard said, they also must “come forward to the community and say, ‘this is the size of the problem.’ You have to be honest with the community about that, and help them understand the problem — the lack of capacity or other issues.

“It means having tough conversations up front,” he added. “Sometimes difficult conversations. But you have to come forward and admit, we can’t do this without support.”

But what’s at stake makes the difficulty — and expense — worth it.

“When evidence is collected, which is hard enough, [victims] expect — and they should expect — something to be done with it,” Corrales said. “Otherwise it feels like they’re just not being served. ‘Do I matter? Do I not matter?’”

Evidence that languishes makes it “more likely that they will not be engaged with the criminal justice process, “ Corrales said. “They feel like nobody cares.”

Texas law says that survivors have a right to find out what happens to their forensic evidence — where it is and what is, or is not, being done with it. Corrales said it “says something” that this isn’t just a best practice. It’s a legal mandate.

“We as an advocacy organization are definitely hopeful,” Corrales said. “How will a survivor engage, if she so chooses, with the criminal justice system? We want to make a shift in feeling.”