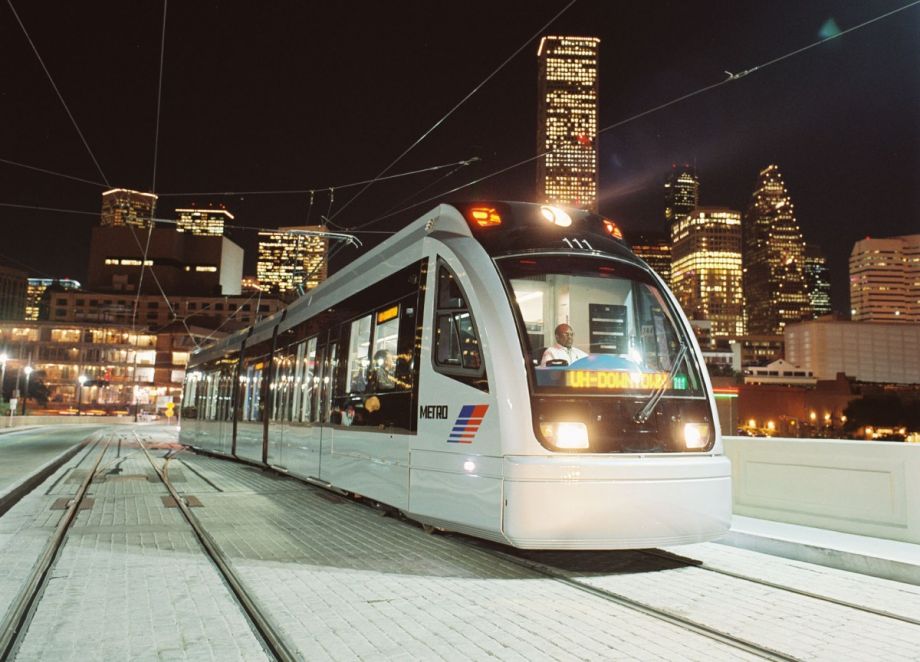 Houston has a bad reputation among urbanists, most often evoked as a dystopic car-scape to be avoided. And while the city’s transit system has its problems – the share of commuters using public transportation dropped from a low 5.9 percent in 2000 to an even lower 4.5 percent in 2012 – there has been one bright spot: the city’s Red Line, a light rail line that travels mostly along Main Street through the most densely-built part of the city center. Behind only Boston’s Green Line in ridership per mile, a key measure of transit productivity, Houston’s light rail line draws an average of 5,000 weekday boardings per mile, putting it ahead of every other post-war surface transit system, even those in more transit-oriented cities like Los Angeles, Portland and northern New Jersey.

But Houston’s Red Line is only 7.5 miles long, covering the lowest-hanging fruit in the sprawling region. The real test will come as America’s fourth-largest city opens up another three lines over the next year, tripling the length of its light rail network.

The first of the second-generation lines, a northward extension of the Red Line, opened last Saturday. The East End (Green) and Southeast (Purple) the East End, or Green Line; and the Southeast, or Purple Line – opening some time next year.

The new lines are, by American standards, better than average. “The kind of rail we’re building in Houston is very unlike what most cities are doing,” said Christof Spieler, a board member at the Harris County Metropolitan Transit Authority, or Metro, in a phone interview with Next City. “Most cities are essentially building park-and-ride-oriented systems, building as far out as they can through low-density areas.” (Dallas and Austin’s next planned light rail line spring to mind.) “We’re really staying in the core, trying to put stations in walkable places. The kind of ridership we’re getting is so impressive.”

Whether the next generation of lines are as good as the original Red Line remains to be seen. Their ridership projections suggest that they might be – by 2030, the East End and North Lines are expected, according to ridership estimates filed with the Federal Transit Administration, to get around the same number of boardings per mile as the Red Line does today.

But it’s hard not to notice a difference between the original line and the new ones. “The lines that are opening are not dense at all,” said David Crossley, president of local urban advocacy group Houston Tomorrow. The neighborhoods they run through are dominated by shotgun shacks and other one-story homes, relatively tightly packed but nevertheless a far cry from the skyscraper-strewn route of the original Red Line.

“But they are full of transit riders,” Crossley continued. “That’s where all the ‘need’ riders are. They’ll be good from the beginning,” he said, “but they’ll take years to see development along those lines.”

And herein may lie a problem for Houston’s new transit network: light rail is heading east, while the city’s moving west.

The new North, East End and Southeast Lines run through low-income neighborhoods that have declined in recent decades. The traditionally African-American Third Ward, for example, shed tens of thousands of residents since 1970, while many new immigrants from Latin America are bypassing the traditionally Mexican-American Second Ward and heading straight to neighborhoods farther out from the core. Houston, America’s largest city without a zoning code, is notoriously friendly to builders, but there is very little in the way of new construction along the new routes.

But still, Crossley was optimistic about development potential along the North and East End Lines, even if he thought the pace won’t be as torrential as in Uptown and other neighborhoods on the west side. But he did worry that development along the Southeast Line, which runs through the Third Ward, will be tougher.

Meanwhile, the city has shifted westwards. Two gleaming new off-center business districts – Greenway Plaza and the Uptown area, anchored by the Galleria Mall – have sprouted on the southwest side of the city. And it’s not just the rich who have moved – low-income neighborhoods like Gulfton, which has the highest residential density neighborhood in the city and a low (by Houston standards) rate of car ownership, have seen huge population growth as immigrants crowd into garden apartment complexes built in the 1970s for middle-class whites moving to the city from the Northeast and Midwest. The highest-ridership bus routes are now those on streets like Bellaire, Westheimer, Bissonnet and Richmond, radiating westwards from Downtown.

For the post-Red Line light rail expansion, Crossley said, “I would’ve done the University Line first.” He’s referring to a line that was planned to run west from Downtown along Richmond Avenue, serving neighborhoods in the southwestern part of the city (including Greenway Plaza and Gulfton), which would’ve eventually connected the Uptown Line, a north-south light rail line that was planned for the booming business district.

But by the time the economic downturn and resultant drop in sales tax revenue came, the University and Uptown Lines were not as far advanced as the North, East End and Southeast lines, so they were put on hold. University has been stalled indefinitely while Metro looks for money to build it, and Uptown has moved forward with a cheaper bus rapid transit line, financed in large part by a tax increment finance scheme levied on area property owners. (But because of the missing east-west line, the Uptown Line will not be connected by any rapid transit link to the light rail network to the east.)

While the growing neighborhoods on the west side of the city won’t be seeing any new light rail anytime soon, they will see much better bus service. In addition to the bus rapid transit line planned for the Uptown neighborhood – which will have 24/7 dedicated lanes, physically separated from traffic – Metro is also embarking on a reorganization of the county’s local bus routes.

The plan is to reorder Houston’s bus network such that 80 percent of Metro’s resources goes towards routes according to their ridership, with the remaining 20 percent spread around to ensure a minimum level of service to even low-ridership neighborhoods (if this explicit discussion of ridership versus coverage tradeoffs sounds familiar, you’ve probably been reading Jarrett Walker’s blog – his transit consultancy is involved in the bus planning process). The agency estimates that two years after the map is redrawn, system-wide bus ridership will jump 20 percent.

“This is a blank slate relook at the entire bus system,” said Christof Spieler. “We’re going to end up with a system that has a lot more frequent service than we have today,” adding that 50,000 of the system’s current boardings in low-frequency areas will, after the reorganization, sit along high-frequency routes.

“The parts of town that are most dramatically underserved are in the southwest” – places like Gulfton, which are outside of the Interstate 610 Loop that has traditionally defined the central Houston. “Areas that have the highest concentrations of people, that we have traditionally thought of as suburbia, though it doesn’t make any sense to think of it that way” given Houston’s evolution towards a more sprawling, multipolar city.

“So many of those residents are not headed downtown,” Spieler said, and are instead going to off-center business districts like Uptown and Greenway Plaza. “If you draw an east-west line a little south of I-10, along Buffalo Bayou, and look at everything south of there and west of the 610 Loop, along Westheimer and along [U.S. Route] 59 and even further south of there, there are really high levels of population density,” and many low-income neighborhoods.

The new rail lines, Spieler said, will also give Metro the opportunity to concentrate on farther-out neighborhoods by forming trunk lines for other buses to feed into. “The North Line,” for example, “means not every bus on the north side needs to radiate into downtown, and we can now set up crosstown routes.”

And for all the success of the Red Line and the expected ridership of the three new light rail lines opening over the next year, buses still rule in Houston: in 2014, 87 percent of Metro’s ridership was on its buses.

“I think the local bus, the least glamorous part of transit, is actually one of our best opportunities to actually make things better,” Spieler concluded. “It tends to get ignored a lot of the time.”

“I’m not saying underfunded,” he clarified, “I’m just talking about not getting the kind of planning attention that glamorous new capital projects get.”