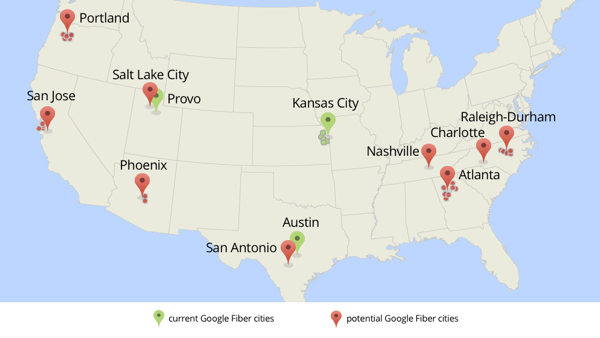 Google Fiber, the blazingly fast and enormously robust one-gigabit broadband network product, is continuing its expansion. Fiber is, at the moment, in place or in the process of being put in place in Kansas City and surrounding areas, Provo, Utah and Austin, Texas. Google announced this week that it is entertaining the idea of getting Fiber up and running in nine metropolitan areas and 34 cities within them: San Jose (four cities, including Google’s hometown of Mountain View), Salt Lake City, Phoenix (two cities), San Antonio, Nashville, Atlanta (eight cities), Charlotte, Raleigh-Durham (seven cities) and Portland (five cities).

Google has never been shy about the fact that Fiber is one part consumer service and one part experiment in how to bring best-in-class broadband to consumers. Here, in Fiber’s latest iteration, we can see the results of some of that early testing.

Back in Round One, in 2010, Google held a spirited open contest in why any government, group or citizen could nominate a city. The Request for Information asked for some high-level details on what the city’s existing infrastructure looked like, but there was a focus placed, at least in public, on enthusiasm. The RFI asked about “existing facilities and resources,” but also wanted cities to detail “how much your community would like to join the trial.” Recall that the city of Topeka renamed itself “Google, Kansas.” 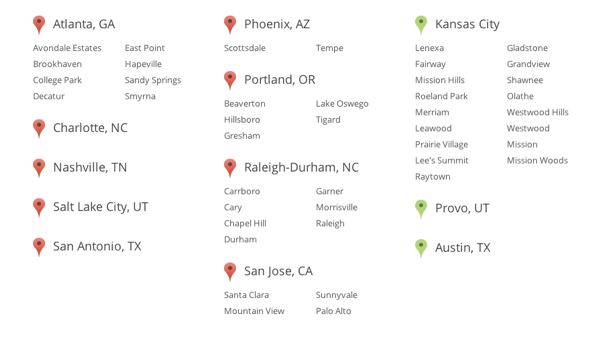 This time around, the company is asking a narrower collection of pre-selected cities to be very, very specific of how their utilities function, particularly the underground passages and above-ground poles through and upon which fiber networks actually run. Google is, then, calling on interested cities to do real homework. Each city must compile a “fiber-ready checklist” of its current state, perhaps to include “maps of poles, conduits, existing water, gas, and electricity lines.”

More than that, the tech giant has gone beyond asking which cities are simply eager to do business with Google. Instead, it’s asking cities to preemptively “streamline processes” that will make it easier for Google to come in and build. Google, meanwhile, will conduct surveys to assess the challenges of putting down fiber networks, “such as topography (e.g. hills, flood zones), housing density, and the condition of local infrastructure.”

There are a couple of things to notice here. One is that this new process shows how Google has learned that infrastructure — and access to it — is more critical to Fiber’s success than consumer demand. And the company is newly willing to tackle those challenges. Indeed, the past Google has grumbled that “regulatory complexities” in California make Fiber-like projects there improbable. But this new bushel of cities includes four in that state.

Another is that Google’s approach means, as a result of either a secondary motive or a pleasant side effect, that it will likely reshape the broadband playing field even in the cities where it chooses not to play. It’s much like the time when, back in 2008, Google put $4 billion on the line in a federal radio spectrum auction, on the condition that there be open-access rules on those waves. Reportedly to the company’s relief, Verizon and AT&T ended up with the spectrum, and Google ended up with the rules it wanted. The company has as much as said that something similar will happen here.

While not every one of the nearly three dozen cities will get Fiber, the company says, “Cities who have worked with us through this process, however, will have taken a big step forward in making their community ready for construction by any provider.” Only in this case, Google doesn’t have to risk billions. It only has to dangle the possibility of Fiber.

We took a deep dive into Google Fiber’s rollout in Kansas City, Mo. and Kansas City, Kan. back in November 2012, with a particular focus on what those twin cities have done to make themselves fit for Fiber. (Subscription or purchase required.)