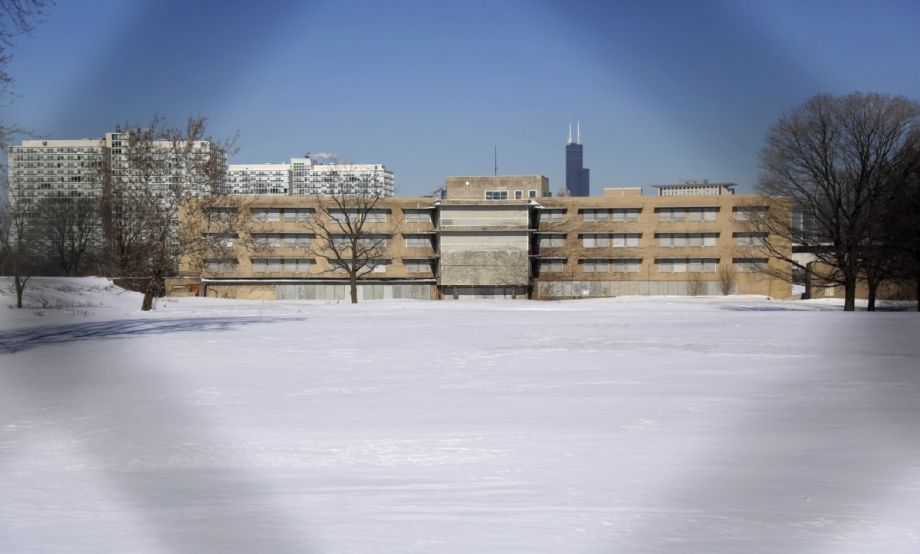 Many in Bronzeville hoped this site of a former Chicago hospital would be the setting for the Barack Obama presidential library. (AP Photo/M. Spencer Green)

Most urban observers can probably recite the stock gentrification script in their sleep: A rundown low-income neighborhood begins to attract new residents looking for homes they can afford. As the newcomers’ presence attracts developers, rents start to spike and property taxes start to rise, forcing the original residents out.

While a growing body of research suggests that the script isn’t quite that simple, the issue is clouded by the fact that, in most such cases, the residents being displaced are black and the newcomers are white, adding a racial element to the narrative.

For the last few years, those looking for an example avoiding that element of the narrative have pointed to Chicago’s Bronzeville — a neighborhood on Chicago’s South Side where both longtime residents and gentrifiers are black.

Between the two World Wars, Bronzeville was home to a thriving community of black entrepreneurs, professionals and creative artists. Stately stone homes housed such noted figures as civil rights activist Ida B. Wells, poet Gwendolyn Brooks, singer Lou Rawls and jazz trumpeter Louis Armstrong. (A recent Chicago Advocate post notes that “Bronzeville’s recent resurgence has fostered a revived interest” in such historic attractions.) The construction of a series of massive high-rise housing projects along the neighborhood’s west side beginning in 1950 sent Bronzeville into a tailspin from which it has yet to fully recover. The razing of that public housing in the early 2000s raised hopes for revival, but revitalization without a racial component still faces daunting challenges.

Independent Entrepreneurs Are the Foundation

Trez Pugh ran a coffee shop in Bronzeville in the 2000s, and he opened Sip & Savor coffeehouse last year. He says his original efforts in the neighborhood garnered him crazy looks.

“I grew up on the Near North Side, and I was used to nice things,” he said. “When I opened, there was nothing but tumbleweeds and vacant storefronts … Before you knew it, within two years, a condo was built across the street, then a daycare center and a clothing shop opened.”

Pugh still doesn’t characterize his corner of Bronzeville as bustling, but his shop has become an anchor for the area — the place, as its slogan says, “where coffee and community meet.”

“You got a lot of black folk with money [living in the vicinity], and they’re lovin’ it,” he says. But he also makes his space available to the entire cross-section of the Bronzeville community: It can be rented for baby and bridal showers; it hosts job-skills workshops for at-risk youth; it’s a showcase for neighborhood arts and culture.

Its reputation has also traveled beyond the neighborhood. Network news anchors, entertainers and politicians from Mayor Rahm Emanuel on down have stopped by the shop. Two years ago, a group of developers who were building new apartment towers in neighboring Hyde Park asked him to open a second location in one of their buildings near the University of Chicago campus. When he told the developers he didn’t have enough working capital, they helped him to come up with the financing.

Independent entrepreneurs like Pugh are the foundation on which the neighborhood’s principal community development group, the Quad Communities Development Corporation, hopes to build a durable neighborhood revival. QCDC was formed in 2003 with assistance from the Local Initiatives Support Corporation and then-Chicago Alderwoman, now-Cook County Board President Toni Preckwinkle, in order to plan holistically for the community’s future, taking advantage of the window of opportunity opened by the demolition of the high-rise public housing along State Street.

“Organizations like mine went to work creating an atmosphere where small businesses would want to come,” says QCDC Executive Director Bernita Gabriel. “Developers started to come in because the projects had come down.”

The 2008 housing market collapse set back redevelopment efforts in Bronzeville, but the market’s gradual recovery has also revived interest in the neighborhood. Most of the businesses that have expressed interest in opening up shop in Bronzeville have been local, which is fine with Gabriel and in line with expressed neighborhood goals. But QCDC is also interested in attracting national companies whose businesses fit in with the overall vision. One, a Walmart supermarket, will open a 42,000-square-foot market as the anchor of a new mixed-use project with apartments above — “the first [new] mixed-use development in the community” in some time, Gabriel notes. QCDC has turned away chains whose business models don’t fit in with the neighborhood vision.

Chicago the City vs. Chicago’s Neighborhoods

Bronzeville does not exist in splendid isolation, however: It’s tied to the rest of the city, and its fate continues to be influenced by large agencies located outside it. Harold Lucas, executive director of the Bronzeville Visitor Information Center, shares Gabriel’s focus on encouraging homegrown local entrepreneurship as the means to return Bronzeville to good health; he makes a distinction between “gentrification,” which he describes as a top-down process, and “revitalization,” which he says comes up from below. Yet he is also critical of both the city’s political elites and some of the large institutions located near Bronzeville for steering development away from the neighborhood.

He offered as an example the building that houses the visitors center, the former Supreme Life Insurance Company headquarters at 35th Street and Martin Luther King Drive. Home of the first and largest black-owned insurance company in the North, the building, a city historic landmark, is one of the linchpins of the city’s Black Metropolis-Bronzeville Historic District.

“From the beginning, we had a hotel we projected to build for Bronzeville here in the Supreme Life building,” Lucas says. “We were told [by the city] that Bronzeville was not ready for an upscale hotel. But since then, two hotels were built with taxpayer money” close to Bronzeville.

He was equally critical of the University of Chicago for its role in choosing the site for the future Obama presidential library. “Their decision to put it at Garfield [Boulevard] and King Drive” in Washington Park, he says, “flies in the face of community efforts to put it where it should have gone” — namely, on land near the lakefront in Bronzeville that had been the site of a large hospital. University officials have since been quoted in the press as saying that while it would prefer a site near its campus, the final decision rests with the Barack H. Obama Foundation.

Gabriel was nowhere near as critical of the institutions whose actions affect Bronzeville, but she did characterize the community’s relationship with the university as “a love-hate relationship.” Chicago faculty and students offer advice and assistance to local entrepreneurs, the university has offered support and resources for community planning efforts, and three of the four charter schools run by the university are located in Bronzeville. But “as far as assistance with retail development is concerned, we’ve not had the luxury of having their assistance yet,” she says. She did, however, praise the university for its efforts to get its faculty and staff to make the neighborhood their home.

The ultimate aim of all the efforts to revitalize Bronzeville, she says, was “creating a community that can sustain itself economically and be home to varying income levels.”

The process may not be smooth, but at least it’s under way, with some good things to show for it.