For One NYC Neighborhood, A Look Back to Learn the Way Forward – Next City

For One NYC Neighborhood, A Look Back to Learn the Way Forward 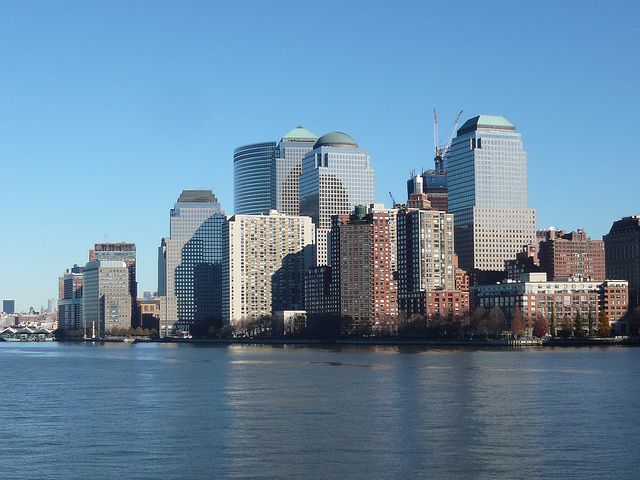 Battery Park City is home to 34 residential towers and about 13,000 residents. Credit: Shinya Suzuki on Flickr

Battery Park City is a 92-acre planned community attached to the southwestern tip of Manhattan. Built with sand dredged from New York Harbor and dirt excavated from the World Trade Center, the waterfront neighborhood is home to 34 residential towers and about 13,000 residents, as well as the behemoth World Financial Center — 8 million square feet of soon-to-be-revamped shops, restaurants, public space and offices.

The area is lauded as a triumph of public-private partnership. But as the project’s master plan architect Stanton Eckstut said last Thursday during a conference celebrating the neighborhood, “The most important thing about Battery Park City is that it’s built.”

“If you look around the country or around the world,” said Eckstut, “the majority of large-scale plans are never realized.”

Battery Park City’s success is due to a constellation of high-profile names, from former New York Gov. Nelson Rockefeller — under whose watch the State’s Battery Park City Authority (BPCA) was formed in 1968 — to Amanda Burden, chair of New York City’s Planning Commission and director of the Department of City Planning.

Early in her career, Burden pioneered Battery Park City’s planning and design. Joining Eckstut on a panel at last week’s conference, she shared a number of design insights, stressing that “If the streets and public open spaces are fantastic, the architecture only has to be pretty good.” This sentiment — informed by the philosophy of Burden’s mentor, urban scholar William H. Whyte — was met with a few uncomfortable laughs from the architect-heavy audience.

The day’s back patting continued with discussion about the BPCA’s 2000 overlay of green guidelines for the community, the debut expression of which was the Solaire building. In 2004, it became the first residential high-rise in New York City to receive LEED Certification by the United States Green Building Council.

To satisfy a BPCA requirement that each new building have a community amenity, the Solaire features public bathrooms (enough, the developer confirmed, to deter at least one prospective resident). This rule has made it possible for a host of facilities, including schools, a branch of the public library, and the Ritz-Carlton-housed Skyscraper Museum, to cheaply populate the neighborhood.

But a crucial citywide need for affordable housing has been largely overlooked. When the project was birthed in the 1960s, a proposal that the housing be divided into 20 percent luxury, 60 percent middle-income and 20 percent low-income was scrapped in favor of allocating one-third of the housing to each income bracket.

However, in the 1980s former Gov. Mario Cuomo abandoned the creation of any affordable housing on-site, instead setting aside revenues to build and preserve low- and middle-income units elsewhere, such as in the South Bronx. This move, said Burden, was a “terrible mistake.”

Cuomo’s funding vision has been foiled in recent decades. A 2004 Independent Budget Office report revealed that few dollars have gone to the creation of affordable housing, with the majority of the revenue relieving the general budget of the cash-strapped city and state. According to the latest financials posted on the BPCA’s site, the 2011 fiscal year brought in $230.2 million in operating revenues — $104.4 million and $66.2 million of which were paid to the city and state, respectively. Another $37 million was released as payment to an affordable housing fund overseen by the City Housing Development Corporation.

The BPCA’s board also reduced its potential revenues in 2011 by rolling back nearly $280 million in fees expected from Battery Park City condo owners, a break which The New York World recently critiqued as a political calculation on the part of former BPCA Chairman Bill Thompson, now a mayoral candidate. (Disclosure: The New York World and Next American City are web partners.)

Today, the address is quite affluent: According to the American Community Survey, the average median household income in the area that includes Battery Park City is $117,128, versus $50,285 for all of Manhattan. The larger neighborhood is also fairly racially homogenous: The 2010 Census reported that its population is 65.4 percent white, 20.2 percent Asian, 7.7 percent Hispanic and 3.2 percent black.

“What lessons have been learned in terms of fostering economic and racial diversity in a residential population?” one attendee on Thursday challenged the final panel.

Charles J. Urstadt, founding chairman of BPCA and oft-proclaimed “father of the Battery Park City,” noted that the mixed-income scheme mentioned earlier ultimately failed because it was politically, but not economically, correct. “We had to have an economic solution to pay for the parks and highways,” he said, “and as a result, diversity suffered.”

Timothy S. Carey, another former BPCA president and CEO, noted that some buildings with 80 percent market units and 20 percent affordable units were built during his presidency (1999-2005), but reiterated that it comes down to economics. “We build green buildings,” he said. “They’re more expensive.”

What’s next for the BPCA? In a period of transition now that the agency finished developing its final land parcels last year, the BPCA may be eyeing Greenwich South, a 41-acre stretch south of the World Trade Center site.

Urstadt thinks the BPCA needs to conquer new land or dissolve, which would be a potentially quite profitable fate for the city, and one the city could bring about were it to exercise its option to buy Battery Park City for $1. Otherwise, warns Urstadt, the powerful state entity risks being “reduced to cleaning up trash and trimming trees.”