Relocated Farmers Market Is a Bright Spot in Flint – Next City

Relocated Farmers Market Is a Bright Spot in Flint 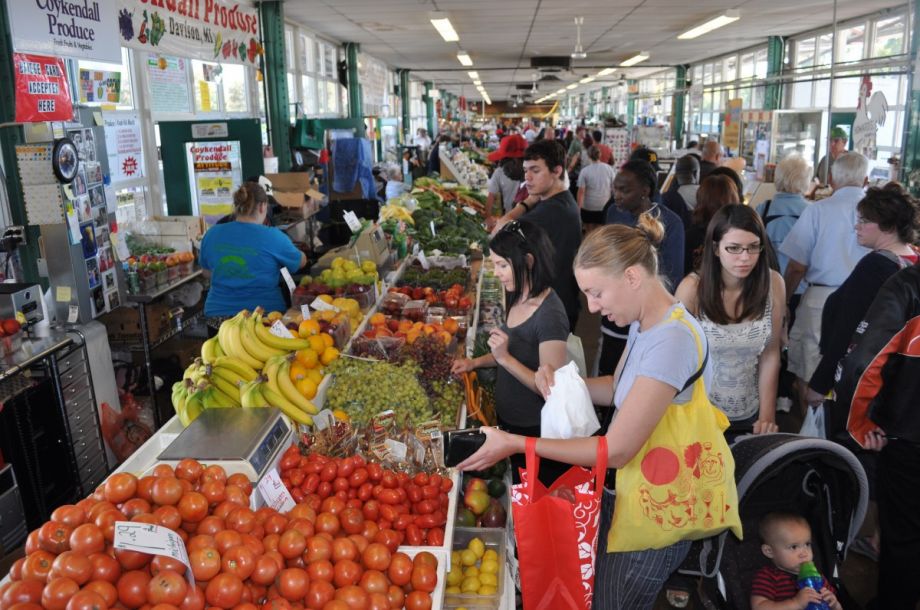 Shoppers at the Flint farmers market, in its former location (Photo by Michigan Municipal League)

In Flint, Michigan, access to clean water may still be elusive, but healthy food is easier to come by thanks to the relocation of a beloved farmers market from the suburbs back into the city’s downtown.

The Flint Farmers’ Market moved in 2013, closer to where it was located in the 1940s. According to a new study by Michigan State University public health researcher Rick Sadler, the move corresponded with increases in the socioeconomic diversity of shoppers, annual direct sales, and the number of people accessing the market by bus, foot, or bike.

Forty-one percent of Flint residents live in poverty, and often lack access to healthy food options. In 2014, nearly half of all respondents in Sadler’s survey indicated at least one barrier to accessing healthy food. But the market’s increased accessibility seems to be helping. Between 2011 and 2014, after the market’s relocation, the percentage of socioeconomically disadvantaged shoppers rose from 31 to 37 percent.

Sadler told MSU Today that some of this success is a result of the market offering incentives like the Double Up Food Bucks program, which allows customers using SNAP benefits to receive an extra $20 of fruits and vegetables when they spend $20 on groceries.

The increase in shoppers arriving by any transit mode other than car also increased dramatically, now that the market is near a bus station. In 2011, just 4 percent of people arrived by bus, foot or bike. In 2014, 21 percent did. In the same time period, sales nearly tripled: from $4.9 million to $14 million.

“The market has not only been good for the local economy, but for reaching people with challenges in accessing healthier food,” Sadler told MSU Today. “That’s important because farmers markets are often perceived as being elitist, only benefiting a certain class of folks. Our local market has proven differently and represents a good cross section of the community.”

The new, larger building — actually the former home of the Flint Journal printing press — also provided the opportunity to bring other community-centered efforts together under one roof. According to Project for Public Spaces, the building also houses a kitchen that hosts cooking and nutrition classes, and the Flint Food Works, a culinary incubator. In August, the Hurley Medical Center opened a children’s clinic on the second floor.