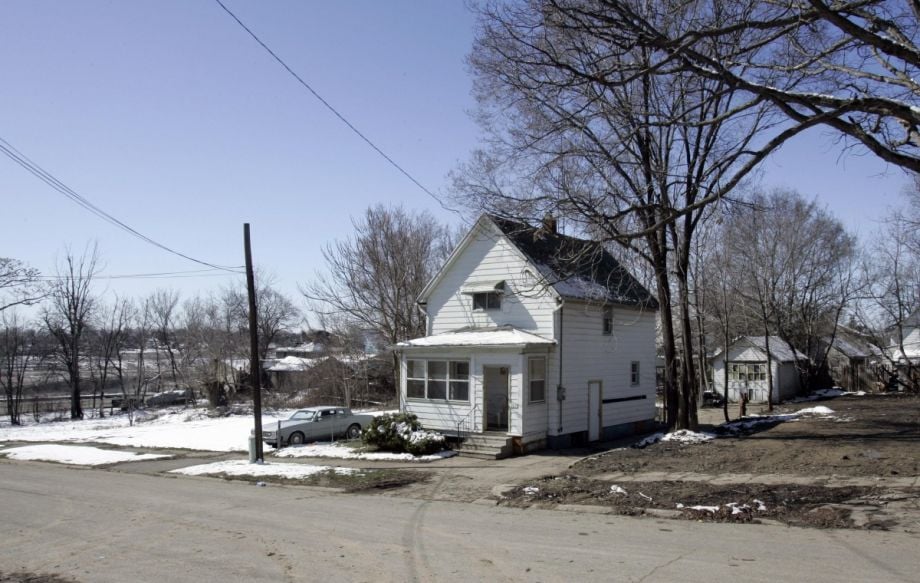 The following essay by Teddy Robertson is an excerpt from a new book out from Belt Publishing, Happy Anyway: A Flint Anthology, edited by Scott Atkinson. Become a Next City member and receive a copy of the book.

After the financial crisis of 2008 and the revelation that subprime mortgages were involved in the bubble that had burst, commentators intoned that we’d just gone too far in America with everyone wanting to own their own home. This folly was attributed to (among others) George W. Bush. When he came into office in 2002 he promoted an “ownership society,” in which owning a home would give people a stake in society. Attractive to voters and lucrative for Wall Street under lax regulation — a “win-win” vision.

Then, lo! The crash of global banks, the faltering of the credit market, and the near collapse of finance. Exposed underneath it all were mortgage-backed securities: tranches of mortgages, bundles of bad loans to eager new buyers unqualified for a “conventional” loan — buyers with low credit scores, nothing in the bank for a down payment, and one paycheck away from default. The shady subprime world was revealed.

I’ve followed this drama; it’s infinitely complex, riddled with arcane phrases and acronyms, packed with factors besides bad mortgages. Nothing rivets me to the TV screen like an interview with economists like Joseph Stiglitz or Paul Krugman. Or better yet, someone I can understand, like Sheila Bair. And don’t get me started on the movies: Too Big to Fail, Margin Call, Inside Job, The Big Short.

I have a stake in this topic because I own a house that I love more than it’s worth. My love has grown as its market value has declined. It’s a healthy house from head to toe — with a new roof and a dry basement. Large windows face the sunrise. In its backyard I grow roses that bloom from June to November.

And the house has a congenial setting — a neighborhood.

I’m new to the neighborhood idea. As a kid I lived on the hillsides of northern California. Only a few houses were visible; it was an “unincorporated area,” outside the city limits. Nobody lived “next door.” We had fields and scrub brush, septic tanks, dirt and gravel roads, and sometimes, in the summer, a random rattlesnake that got killed with a shovel. When you saw a neighbor, it was thanks to an emergency — for example, a finger severed with a scythe.

As an adult, I lived in a big city, on the top floor of a high-rise apartment building. I learned the nuances of nods and mumbles, the social norms of the elevator and the hallway. After that, I lived in a small town on Main Street. Everyone minded their own business, knew what you bought at the IGA, observed what you wore to church, and commented on how you raised your kid. It was ingrown and insufferable.

So when I came to live in Flint, and bought a house in a part of the city called Mott Park, I didn’t understand the real value of a neighborhood — until the mortgage crisis of 2008.

Mott Park developed from a housing vision that preceded former President Bush by at least three decades. In 1919 General Motors created a subsidiary called the Modern Housing Corporation to build a residential area of sturdy, affordable houses. It was GM’s response to the needs of auto workers in Flint, Pontiac and Detroit: a planned neighborhood. The first Mott Park homes were built in 1921; the area filled in street by street. By 1933, private developers built Mott Park’s remaining homes, including those along Nolen Drive like mine. Larger and more architecturally complex, these houses sit on lots along the Flint River across from a city golf course. Varied building styles, curvilinear streets, a public park, and many trees made the neighborhood attractive. Mott Park exemplified an American dream accessible to the working class.

Photos and reminiscences document this neighborhood in its mid-twentieth-century heyday. The Mott Park Chronicles, compiled by two local residents, shows happy 1950s families, children on the sidewalks heading off to nearby schools. There’d be a family car in the driveway (probably a Buick). It was a lifestyle of pride in home ownership that lasted several decades — precisely the years of President Bush’s youth.

The 50s afterglow was still warm when I bought a house in the neighborhood in 1995, even though Flint had suffered in the decades-long decline of the auto industry. Since the 2008 mortgage and financial crisis, the “great recession,” sharper signs of hardship mingle with new values and new ways.

Homeowners who could afford to leave the neighborhood have moved away. Some left for typical reasons. Older folks retire; the dogs they used to walk have died. Younger couples want better schools or more bedrooms as the kids grow up. Others have left because of issues with crime and a decline in safety enforcement. And still others were unable to keep their homes; they lost a job and could not re-finance. Some were subprime buyers with no options, so they just decamped, increasing the number of vacant homes. One week all seems normal; the next, people are just gone and the house is suddenly empty. Through the glass of uncovered windows, rooms at the back of the house are visible. How long did these people deliberate before slipping away? Their months of desperation were not visible to the Sunday walker.

Fewer traditional property owners live here now. The newcomers live in a different world than those for whom these houses were built or the first generation of homeowners that followed them. Renters, lease-holders, welfare agency clients — they too surely enjoy the freedom, fresh air and green expanses that still-decent houses in a fairly good neighborhood provide. But what former apartment dweller moves in with a lawnmower? The yard around the house or the paint and repairs are probably not the renters’ responsibility; landlords do the minimum, usually less. If people are buying on land contract, they can make payments, but not much more.

My unscientific calculation is that a single-family dwelling occupied by renters can last about two years before external decline sets in. A vacant house goes in a year. Some edges of the Mott Park neighborhood have gone beyond reclaiming. A Genesee County Land Bank assessment charts the changing status of the neighborhood’s housing stock. A color-coded map of parcels rates the houses as good (rose), fair (pink), poor (violet), or structurally deficient (red). You can see which properties the Land Bank owns and where the tax foreclosures are.

I’m over the shock of the changes, visual ones mostly, and even the drastic loss of property value. I’ve discovered something else that seems to matter now and it’s tied to the neighborhood, a bunch of people all in the same rickety residential lifeboat. They have grit, like the autoworkers who first lived in Mott Park. Neighborhood residents raise money to repair the playground. They patch the asphalt on the tennis courts, hang new nets, and repair fencing. A small grant enables gardeners to plant the public flower beds laid out a half-century ago. Volunteers adopt a street to keep free of trash. Twice a year student volunteers from Kettering University and nearby churches join in to clear blighted streets and alleys. Residents constructed four little libraries for kids in the neighborhood and joined the movement of “Little Free Libraries.” When the city abandoned the golf course, a neighborhood group organized to ensure that the land is mowed and to solicit ideas to develop it for year-round recreation.

The Facebook pages that hold some of these efforts together show how creative, energetic and diverse these neighborhood people are. Neighborhood meetings can be volatile as residents with little shared background or history struggle to make decisions together. Stakes are high when you have nowhere else to go.

I drive through other distinctive neighborhoods in Flint like College and Cultural Center or Woodcroft, areas with larger and more imposing homes, that were built in the 1920s for scions of the auto industry or company managers. I’m amazed at how solid they still seem, with their slate roofs and horseshoe drives. The telltale signs are less visible in these areas that suffered less in the decades of automotive collapse that weakened Flint before 2008. My eye is canny, however; I know how much change can be hidden. Friends in those neighborhoods worry too; they are often reluctant to speak, lest they contribute to the perceived devaluation of their investment.

As for Mott Park, the year 2019 marks the centennial of its founding, of a historic relationship between America’s workers and the automotive industry in the city of Flint. Most of the plants are gone now and the number of remaining workers is a fraction of what it once was. But much of their housing survives. And the people in those homes are not subprime at all.

Teddy Robertson was raised in California, lived in Poland over four years, and has remained in the Midwest since she returned to the U.S. to complete a doctorate in Slavic Languages and Literatures at Indiana University. She arrived in Flint in 1984, and her early experience was shaped by the promise and collapse of Buick City. She has resided in three of Flint’s neighborhoods — the North End, Glendale Hills and Mott Park. She retired from UM-Flint as Associate Professor in History.