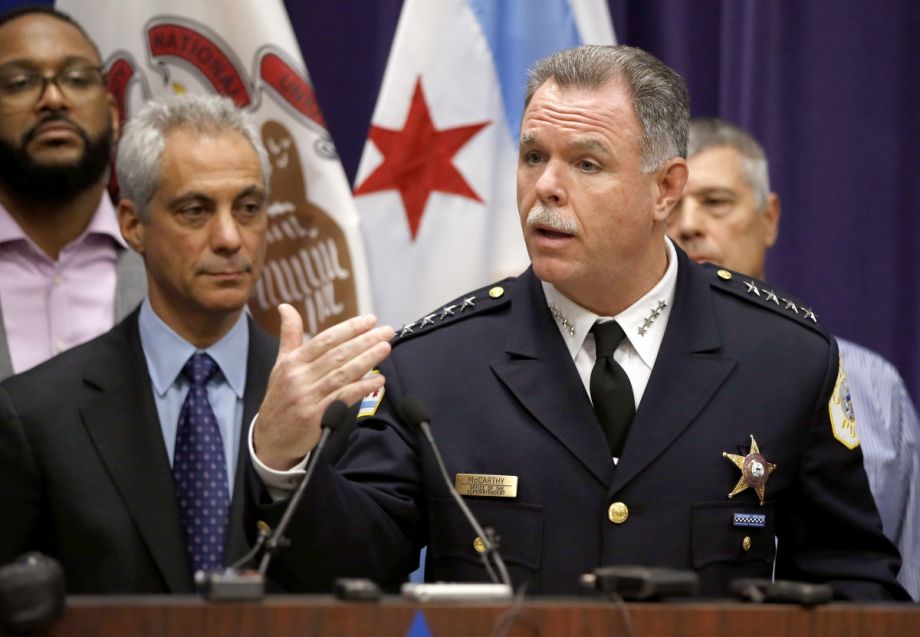 This week, Chicago Police Superintendent Garry McCarthy, was forced to step down after one of his officers became the first cop in city history to be charged with first-degree murder in the line of duty.

Dash-cam video released last week appears to contradict Officer Jason Van Dyke’s assertion that he feared for his safety when he emptied 16 rounds into 17-year-old Laquan McDonald during an October 2014 chase, continuing to fire after the teen fell to the ground. The Cook County State’s Attorney and the Chicago Police Department are both under fire for their handling of the case, which has dragged on for more than a year. And there are mounting calls for Mayor Rahm Emanuel to vacate his seat (which the mayor said on Wednesday he has no intention of doing).

Van Dyke’s indictment may have been overdue, but both it and McCarthy’s termination are still astounding events in a country where police officers across all ranks are rarely held accountable for their actions.

Like all public beheadings, though, once the blood has been hosed away and the crowds have dispersed, it’ll be back to business as usual on the public square. That’s because what’s plaguing policing culture in America’s largest cities has its source lower down the bureaucratic food chain, and excising it will require steps that are more tedious and far less spectacular.

In his 14-year career on the CPD, Van Dyke had 20 civilian complaints filed against him, far above the average for officers in the 12,000-member department. The vast majority occurred before McCarthy took over the Chicago Police Department, in 2011. During that time Van Dyke had at least half a dozen supervisors — all of them career officers of the CPD.

District commanders in Chicago are well paid, earning in excess of $160,000 a year, but not a single one has been held to account for Van Dyke’s astounding failure as an employee. Instead a number have been promoted into the higher echelons of the CPD. According to the Chicago Tribune, Van Dyke was transferred to the 8th District in the Chicago Lawn neighborhood — where the McDonald shooting occurred — in 2013. He clocked at least five complaints in over a little more than a year there, two of them in just one month. His commander through most of that time, David McNaughton, was rewarded with a promotion last year to deputy chief of patrol.

Prior to that, he was in the 7th District, in Englewood — one of Chicago’s highest-crime neighborhoods. His supervisor there was Anthony Carothers, a three-decade CPD veteran who has long been a source of controversy. In 2008, when the Chicago Police Sergeants Association sued the city unsuccessfully on claims of nepotism in the promotion process, it cited Carothers as an example of an officer who was promoted based on his political connections rather than his abilities. (Carothers’ brother and father both served as city aldermen and both were convicted on corruption charges.)

In 2012, Carothers was promoted out of the 7th to an administrative position overseeing nine districts. He is now an adjunct professor teaching police procedure at Northwestern University. District supervisors like McNaughton and Carothers are transferred in and out of districts so frequently that it’s hard to imagine how they could imprint their leadership on the officers they oversee even if they were inclined to do so. Still, like any large bureaucratic organization, municipalities need to start placing more scrutiny on the people who have direct oversight of street officers instead of focusing only on relatively cosmetic changes in upper leadership.

This is complicated by an overall lack of police accountability in most municipalities. The number of civilian oversight boards tasked with investigating police misconduct at America’s roughly 18,000 individual law enforcement agencies numbers in the hundreds. For years the Chicago Police Department conducted its own probes into excessive force through its Office of Professional Standards. In 2007, it replaced the OPS with the Independent Police Review Authority, which is ostensibly an impartial body but is biased heavily toward the police, according to local media. A report last year from Chicago Public Radio found that the “civilian” review board’s management included six former career cops. Three of them were in top leadership positions.

Did McCarthy deserve to be fired? Probably so (if only for his disastrous stop-and-frisk program). But the Chicago Police Department was a mess before he took over, and it will continue to be a mess under his yet-to-be-announced replacement until policing watchdogs (myself included) stop chasing the shiny objects municipal leaders dangle in front of us and demand real, systemic changes to the way police departments conduct day-to-day operations.

Mayor Emanuel has established a new six-member Task Force on Police Accountability to facilitate that process. I confess that with the exception of former Massachusetts Gov. Deval Patrick, I am not familiar with the careers of its members (three of whom have served as federal prosecutors). I’m willing to take it on faith that they’re all capable professionals. Unless they’re willing to confront the entrenched powers (not least of all police unions) that let precinct commanders fly under the radar as rogue officers under their command run amok in the streets, it’s all but certain they will fail.