Chicago Makes History With $5.5M in Reparations for Police Brutality Case – Next City 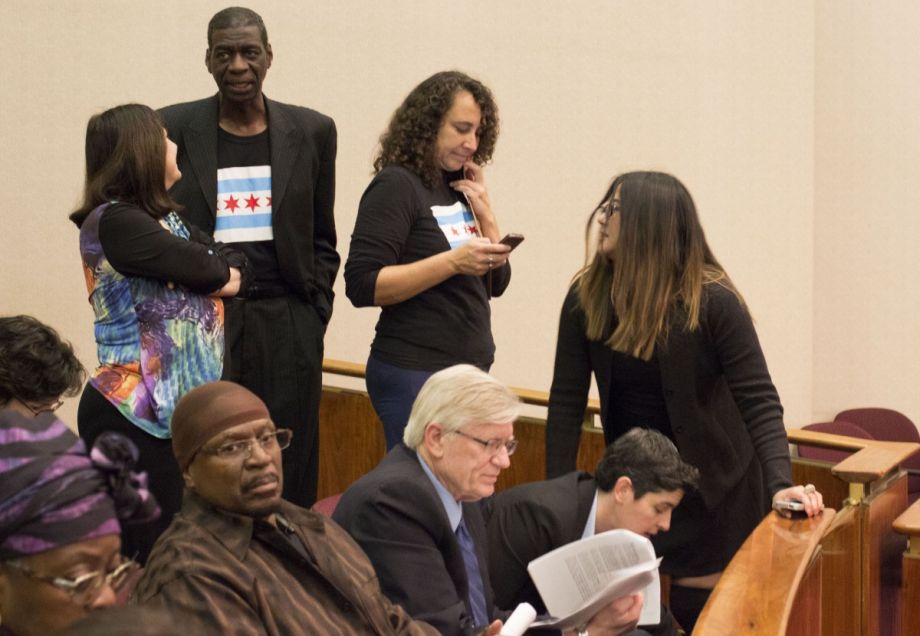 Darrell Cannon (standing) and Anthony Holmes (sitting, looking at camera) were victims of police brutality in Chicago. The city council voted to pay reparations related to their cases. (Photo by Jenn Stanley)

Chicago just became the first U.S. city to offer reparations to victims of police brutality. The Chicago City Council voted unanimously on Wednesday for a $5.5 million reparations package to go to survivors of former Police Commander Jon Burge’s reign of terror. The long struggle for the victims and the efforts for a Chicago Torture Justice Memorial garnered attention and support throughout the city, and a packed crowd, including survivors and their family members, watched from the gallery as council members announced their decision.

“This is truly a historic day for this City Council and most importantly for the victims of this horrific behavior that happened right here in Chicago,” said Alderman Joe Moreno at Wednesday’s meeting. “I want to thank you, Mr. Mayor, for moving forward this terrible chapter in Chicago when others preceding you did not even want to acknowledge it. Unfortunately we will not ever close the Burge chapter but we’ve come a long way.”

From 1972 to 1991, over 100 suspects, mostly African-American males, were tortured and forced into confessions by Burge and officers under his command. Joey Mogul, an attorney for the People’s Law Office, the firm representing the victims, said there are at least 118 victims, many of whom were not guilty of the crimes they were coerced into confessing.

At the council vote, Mayor Rahm Emanuel thanked the victims and their families for their persistence in fighting for what was right.

“What happened here in this action today is that Chicago finally will confront its past and come to terms with it,” Emanuel said. “This stain cannot be removed from our history but it can be used as a lesson of what not to do and the responsibility that all of us have.”

On April 14th, during the hearing after Mayor Rahm Emanuel and the People’s Law Office had agreed on a reparations package, some of the victims stood before City Council to recount their experiences. Darrell Cannon, one of the victims, gave a wrenching testimony of being taken to a lot on the far South Side of Chicago, where the officers told him no one would hear his screams. They attached electric cattle prods to his testicles and shoved the barrel of a shotgun in his mouth and began playing Russian roulette in a mock execution.

The financially strapped city has already spent $64 million in legal settlements for Burge cases, and this $5.5 million will be allocated to living victims at a cap of $100,000 each. If any have received a settlement already, like Cannon who received a $3,000 settlement from the city, that amount will be subtracted from their share. Victims and their families will also receive free tuition at city colleges, with a limit of 50 such scholarships per year.

But this reparations package reaches beyond financial settlement, and attempts to start to heal the community that was terrorized during the Burge years.

“Torture infects the entire family and seeps into the community,” Mogul said at April’s hearing.

The agreement dictates the building of a community center on the city’s South Side where victims and their families can receive free counseling services. The ordinance does not specify how the center will be paid for or where specifically it will be located. A public, permanent memorial will also be erected in honor of the victims.

“The non-financial benefits are what I’m proudest of, and what I feel will do the most good,” said city lawyer Steve Patton. The ordinance also mandates that starting in the 2015-2016 academic year, Chicago Public Schools will teach the Burge torture cases in history classes. These lessons will also seek to foster discussion about police brutality throughout the nation.

“You’ve got good police and bad police,” said Anthony Holmes, one of Burge’s victims. “But there isn’t a day goes by that I don’t suffer.”

The vote comes at a time when cities throughout the U.S. are dealing with tensions between residents and police, particularly regarding the treatment of African-American men. As is seen most recently in Baltimore, the country is at a crossroads over dealing with racial inequality and police brutality. On Monday, President Barack Obama addressed these issues during an interview with late-night TV host David Letterman.

“The first step in curing any problem is being able to diagnose it and acknowledge it and not hide from it,” Obama said. “We still have racism in our midst. We still have problems of ignoring poverty in our midst. Kids are locked into situations where it’s very hard for them to pull themselves out unless they get some help. The more we’re aware of it, we can solve it.”

At last month’s hearing, spirits were high that this ordinance would contribute to the national conversation.

“Chicago will no longer be the second city,” said Mogul. “But the first city to take a stand against torture and injustice.”