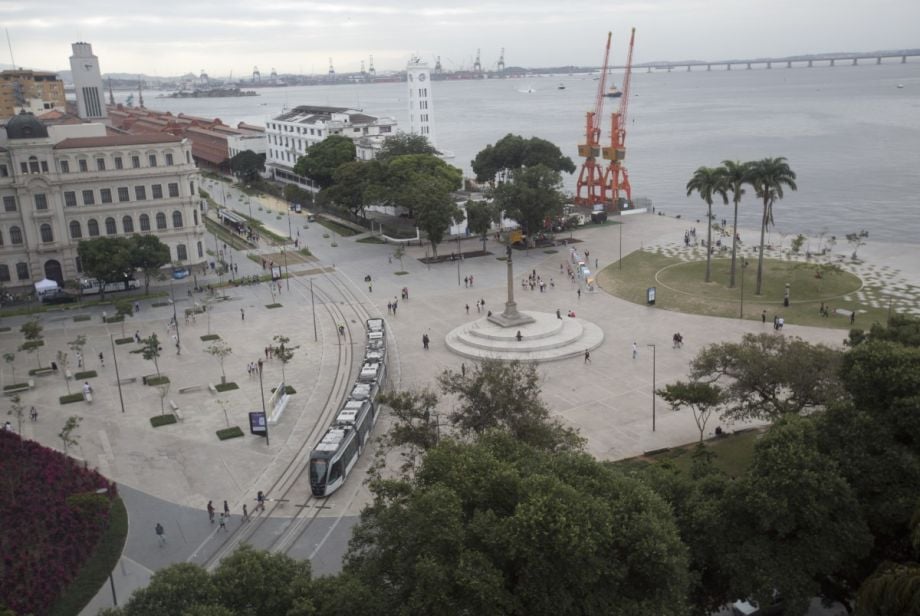 The finishing touch came at noon on Oct. 26 with the opening of a 1.3-km (0.8-mile) segment of track that allowed Line 3 of the system to begin service. The new segment diverges from Line 1 at Candelária and proceeds from there to Central do Brasil, the main interchange point for suburban rail, metro and intercity bus services along with the Providência aerial tramway and VLT Carioca Line 2. Line 3 shares track with Line 1 between Candelária and Santos Dumont Airport.

According to Metro Report International’s report on the opening, disagreements between the city of Rio de Janeiro and system operator VLT Carioca over subsidies delayed the opening of Line 3 for passenger service. The first line opened in June 2016, followed by Line 2 in February 2017; Line 3 was to have opened by the end of the same year.

With the opening of Line 3, daily ridership on the Rio light-rail network is expected to rise from 80,000 daily riders to 100,000.

Speaking of delays, metro trains should have been carrying passengers in Hanoi by now. But several issues, including administrative issues with the first metro line’s Chinese contractor and delays in loan disbursements from the Chinese government, have pushed the opening day back for at least four years.

Even now, the Chinese contractor responsible for completing Line 1 of the Hanoi Metro refuses to assure officials in the Vietnamese capital that the line will open for service by the end of this year. But no matter: According to a report in VNExpress International, city officials are already talking about extending the initial line.

When it opens, Line 1 will run from Cat Linh Station in the Dong Da district downtown southwest to Yen Nghia Station in the Ha Dong district, a distance of 14 km (8.7 miles). In a report submitted to the National Assembly on Oct. 22, Hanoi officials propose extending this line another 20 km (12.4 miles) further southwest to Xuan Mai Town.

The report also describes plans to extend the second line, which will run from Ha Dong district to No Bai Airport, a distance of 35.2 km (21.9 miles), an additional 9 km (5.6 miles) from No Bai Airport to Soc Son district on the city’s northern fringe. And it also envisions extending line 3, a 12.5-km (7.8-mile) line running west from Hanoi Railway Station to Nhon in Nam Tu Liem district, an additional 30 km (18.6 miles) to Son Tay district on the city’s western fringe. Work has yet to commence on either of these lines.

LIne 1 was scheduled to open in 2013, but the delay in disbursement of the loan proceeds shredded that schedule. Test trains have been operating on the line since March.

From takeoff to landing, it takes roughly 30 minutes to fly between Kansas City and St. Louis, a distance of just under 250 miles. But that doesn’t include the time spent driving to the airport and waiting in the secured area for one’s flight.

A blue-ribbon panel chaired by Lt. Gov Mike Kehoe released a report that House Speaker Elijah Haahr intends to use to propel the Show-Me State to the front ranks of research and development of hyperloop technology by building a “national certification track.”

This test track, the report states, “would serve as the natural center for research and development of the technology and should be supported by a robust ecosystem of academic and industry partners led by the University of Missouri system.”

And, the thinking apparently goes, it would also serve as the launchpad for a cross-state hyperloop line connecting St. Louis and Kansas City. That would also allow the state to alleviate the pain of one of its biggest transportation headaches: the increasingly overstressed Interstate 70, the main highway connecting Missouri’s two biggest cities.

“Building the Hyperloop would alleviate a lot of the problems with our interstate system,” Haahr said at an Oct. 28 news conference. “The wear and tear, the human cost of access, would go down significantly.”

Missouri voters have rejected two proposed gas tax hikes aimed at raising money to repair the state’s crumbling roads and bridges, and legislators have turned to floating bonds as a Plan B. Given that, it seems that a superfast 250-mile-long tube train track that would cost anywhere from $7.3 billion to $10.4 billion to build might not prove a viable alternative, even in the long run. But with Haahr touting a hyperloop project as creating thousands of jobs, the idea just might gain traction. And with a projected top price tag of just $41.6 million per mile, it will be a bargain compared to the Second Avenue Subway.