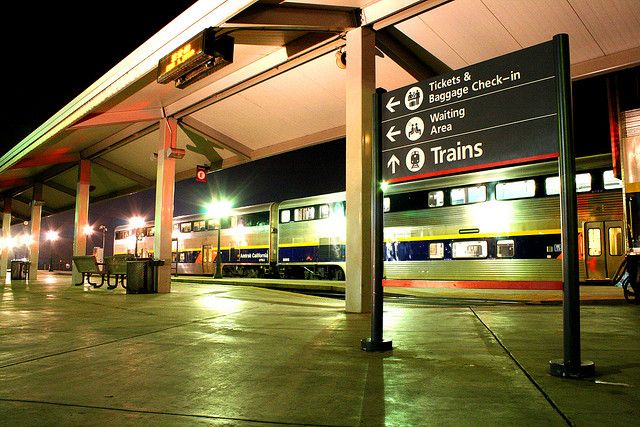 Despite transportation becoming cleaner, quieter and safer over the past few decades, little has been done to limit how passenger and freight travel contribute to climate change. That’s why the U.S. Department of Transportation this week announced a $5.6 million grant to help six universities establish the National Center for Sustainable Transportation.

Housed at the University of California, Davis, the center will also receive $5.6 million in matching funds from state and local transportation bodies. It is one of five new university-based national transportation centers — each dealing with a different subject area — that won awards from the DOT’s Research and Innovative Technology Administration.

The announcement came a few days before today’s release of the highly anticipated Fifth Assessment Report from the United Nations-created Intergovernmental Panel on Climate Change.

The new center will coordinate research already underway at each of its member institutions: UC Davis, UC Riverside, the Georgia Institute of Technology, the University of Vermont, the University of Southern California and California State University, Long Beach. “Each partner brings a different strength to the project,” said Susan Handy, a UC Davis professor of environmental science and the center’s director.

Despite decades of progress in mitigating other transportation-related impacts on the environment — such as air and water quality degradation — the transportation sector has only recently started to figure out how to address climate change, Handy said. It’s particularly unfamiliar ground for many state transportation departments.

“They’re really struggling to figure out what their role is and how they can adjust their practices and the role they take,” Handy said.

Dan Sperling, a UC Davis professor of civil and environmental engineering and the executive director of the school’s Institute for Transportation Studies, puts it even more bluntly. “The transportation sector is not very innovative,” he said. “There are not many changes taking place. The roads are basically the same roads we’ve had for decades.”

Still, Sperling said he finds the new grant encouraging. “I am reassured that at the federal level, the DOT sees a need for this,” he said. “That is very welcome. There’s not been much of an emphasis on this in the past.” But he noted that many transportation decisions are made at state and local levels.

“That’s where the initiative and expertise is missing,” he said. “The question is, how do you actually transition? What’s the role of state and local governments?”

Sperling, who is also a member of the California Air Resources Board, one of the state partners of the new research center, said that the transportation sector has barely tapped modern information technologies that might help to better manage rail and road systems.

Of course, transportation contributes to climate change in many ways, not least of which include vehicle emissions, road construction and freight systems.

“People think about vehicles and fuels as the problem, and that’s the solution,” Handy said. “[The logic goes] if we’re emitting too many greenhouse gases, we have to convert to electric vehicles. It’s not that simple, because for one thing solely relying on improvement in vehicle emissions technology does not get us fully to our carbon emissions goal.”

Under California’s Assembly Bill 32, reaching that goal means reducing the state’s carbon emissions to 1990 levels — or 30 percent from its enactment in 2006 — by 2020. Part of that reduction will come from reducing the number of miles people drive through a set of strategies that local regions are developing under California’s Senate Bill 375.

While some states — California, Oregon and a number in New England and the Mid-Atlantic — have adopted zero-emission vehicle programs, work remains to convince other states to take on similar endeavors. The new center seeks to answer whether incentive programs, charging station networks or other strategies are the most cost-effective, implementable strategies for these and other mandates.

Though the six universities had already begun collaborating even before the consortium was formed, the center will seek to capitalize on the research strengths of each. UC Davis, for example, operates a plug-in hybrid vehicle center, studies alternative fuels, and has an urban land transportation center that looks at how community design affects vehicle miles traveled. It also runs a pavement research center that explores the carbon impact of road building and maintenance.

Meanwhile, the METRANS Transportation Center — a partnership between USC and California State University, Long Beach — studies the transportation problems of large metropolitan areas. Combined, the Ports of Los Angeles and Long Beach make up the largest container port in the world. When it comes to the National Center for Sustainable Transportation, METRANS will build on its research into sustainable freight transportation.

“Most of the research we’re going to do will have to do with increasing the efficiency of urban freight operations, or figuring out how alternative fuels may help,” said METRANS director Genevieve Giuliano, who is also a senior associate dean at USC’s public policy school.

METRANS will study housing and freight systems to explore where consumers actually are in relation to freight distribution centers. It will also study how land use affects truck travel. One big issue will be “logistics sprawl” — since warehousing and distribution continue to decentralize, does that mean a significant increase in truck miles?

Next steps for the new center will be practical: Hiring staff, meetings with partners who have promised matching funds, establishing a leadership council and setting research priorities.

“There’s a lot of institution-building that has to go on to get a project like this going,” Handy said. The grant, however, only pays for two years. “We’re hoping that the DOT and Congress see fit to go forward with the program beyond that.”

Four other national transportation centers will receive federal grants. One at the University of Maryland will focus on economic competitiveness; at Carnegie Mellon, the focus will be on safety; at Rutgers, on road maintenance; and at Portland State University, livable communities.

Bill Lascher is an Oregon-based journalist who writes about places, people and the forces that act on and between the two. He is currently researching the short, dramatic life of World War II Time magazine Far East correspondent Melville Jacoby. His work is available at www.lascheratlarge.com.