Keeping a Focus on Equity Amid Neighborhood Investment – Next City

Keeping a Focus on Equity Amid Neighborhood Investment 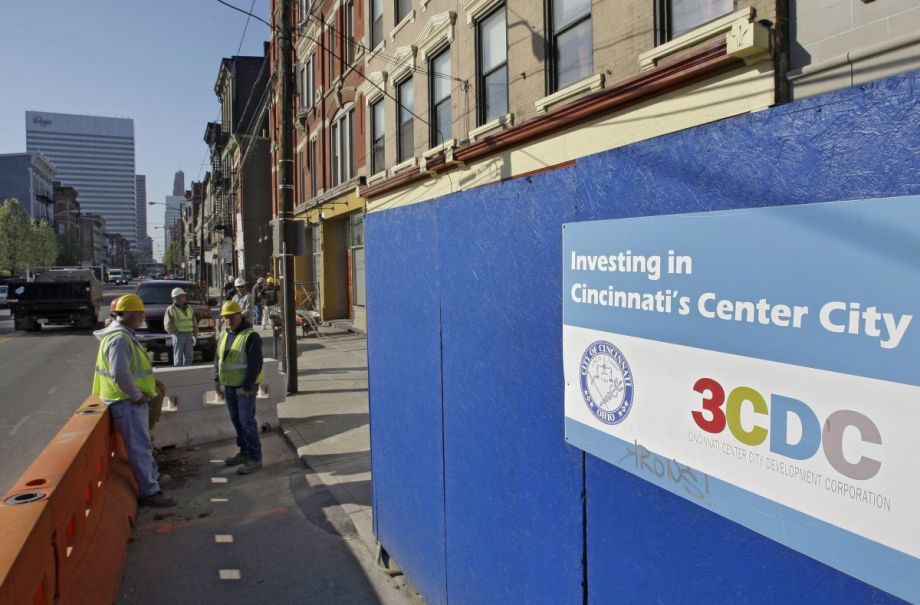 Born and raised in Cincinnati, Donny Harper is an entrepreneur with a message. “It’s about who you are and who you want around you,” says Harper. “When was the last time you had a conversation about the company you keep? Who’s challenged you on that lately?”

Part of the inspiration for his two-and-a-half-year-old brand, Good Company Apparel, was an incident involving his nephew. As Harper tells it, years ago, at age 20, his nephew was riding with a friend who jumped out of the car and robbed someone at gunpoint. Harper’s nephew was sentenced to six years in prison over the incident, his first criminal offense, “all because he was with the person who held the gun and did the crime.”

Today, Harper uses his brand to remind himself and others to watch the company they keep. “Some labels have a good message, but their style is nothing to build your wardrobe around,” he says. “Or they have good fashion, but not a message that’s filling a void in our world today. I wanted that for the brand.”

Harper, 38, somehow fits in designing, ordering supplies, getting things printed or stitched, and selling, packaging, and shipping for Good Company Apparel between his day job as a paraprofessional for Cincinnati Public Schools, co-pastoring at Love and Grace Outreach Ministries, which he and his wife, Ciara Harper, launched in 2014, and raising their four children.

Good Company Apparel is growing, earning more in its second year than its first, and is on pace to grow again in its third year, according to Harper. One of the big reasons for that has been the opportunity to take advantage of the foot traffic generated by the dramatic reinvestment in Cincinnati’s Over-the-Rhine over the past decade. The neighborhood went from largely blighted and crime ridden to a bustling blend of small businesses and mixed-income housing.

“About 10 years ago, it was a place you didn’t want to visit,” says Harper, who lives with his family in Cincinnati’s College Hill neighborhood. “You didn’t go down there unless you absolutely had to. Over the past four or five years … it is amazing. You have all walks of life walking around down there.”

Over-the-Rhine’s turnaround started with something that’s become all too familiar, for all the wrong reasons. In an Over-the-Rhine alleyway, Cincinnati police officer Stephen Roach shot and killed Timothy Thomas, an unarmed black man, early on the morning of April 7, 2001. The killing ignited a period of unrest, culminating again when Roach was later acquitted.

Public officials, community organizers, affordable housing advocates and business leaders came together to create a comprehensive plan for Over-the-Rhine, which came out in 2002. The plan envisioned a balanced housing stock, with equal parts affordable to households earning 0 to 30 percent of area median income, 31 to 60 percent, and 61 to 100 percent, and unlimited-income units. It also envisioned more mixed-used areas, especially ground-floor retail along major thoroughfares like Main Street, Vine Street and around Findlay Market, the only surviving municipal market house of the nine public markets that operated in Cincinnati in the 19th and early 20th centuries.

Led by the city’s Fortune 500 companies like Procter & Gamble, Kroger and Macy’s, the business community formed a new entity, the Cincinnati Center City Development Corporation, or 3CDC, to focus on reinvestment in downtown Cincinnati and Over-the-Rhine, which is just north of downtown. Over the years, 3CDC has invested in projects totaling about $600 million in Over-the-Rhine, encompassing 142 buildings restored, with 408,192 square feet of commercial space, mostly ground-floor retail.

“When we started, there was very little commercial activity in the neighborhood,” says Adam Gelter, executive vice president for development at 3CDC.

The Cincinnati Development Fund (CDF), founded in 1988, redoubled its efforts lending and investing in Over-the-Rhine, now totaling more than $92 million in loans across more than 165 buildings in the neighborhood.

The U.S. Treasury awarded 3CDC and CDF a cumulative $385.4 million in New Markets Tax Credits allocations from 2003 to 2014, helping to drive capital into Over-the-Rhine, most visibly with the $48 million rehab of Washington Park, the neighborhood’s cultural heart. Last year, 3CDC began renovations to the interior of Music Hall, the magnificent Italianate concert hall facing Washington Park. (Over-the-Rhine is home to one of the nation’s largest remaining collections of Italianate architecture.)

The speed at which change has come to Over-the-Rhine has caused concern for some that the neighborhood will soon be unaffordable for the working-class black households that once dominated the area. Although Over-the-Rhine’s black population grew from 2010 to 2015, according to Census Bureau estimates, it went from being 69 percent of Over-the-Rhine’s population in 2010 to 53 percent in 2015. The white population went from 21 percent to 40 percent. 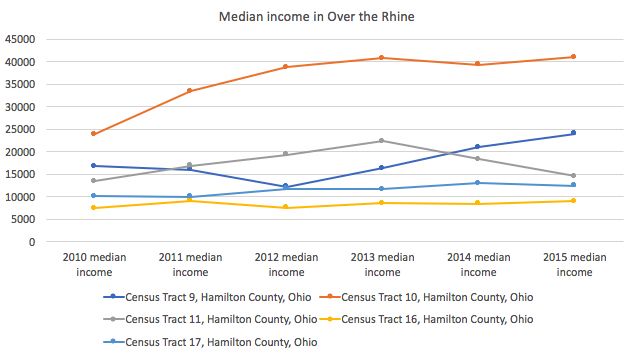 Incomes are a mixed story too. In census tracts 9 and 10, closest to downtown, median incomes have gone up, while they’ve been stagnant in the rest of the neighborhood. “It seemed impossible to imagine that it would be an issue that low-income people would be priced out,” admits Jeanne Golliher, president and CEO of CDF. “But it can happen faster than you think it can happen.”

In terms of commercial development, 3CDC has been intentional about making sure businesses that lease space are locally owned. It’s apparent from walking around Over-the-Rhine today that they’ve mostly held to that. One of their first commercial tenants was Incredible Creations, a black-owned beauty and barber salon, on Vine Street. It’s still there, even though owner Ladevan Johnson passed away in a motorcycle accident last fall. (His wife still operates the shop.)

But as development has picked up, commercial leasing accessibility for local entrepreneurs of color isn’t guaranteed in a city where black median household income is $24,272, compared to $57,481 for white households.

“I would say the number of minority-owned businesses seeking us out has gone down over time as a percentage of businesses that approach us for space,” says Gelter.

In response to the disparity, Derrick Braziel, Allen Woods and William Thomas II created Mortar in 2014. An entrepreneurship accelerator, Mortar supports people from underserved communities, positioning them to take advantage of development going on around them. (I previously covered Mortar in its role as part of the Runway Project to support entrepreneurs of color.)

Mortar’s flagship is a nine-week entrepreneurship course designed to help low-income urban entrepreneurs build or expand businesses. They also created a 400-square-foot permanent pop-up space called “BrickOTR,” next door to their headquarters on Vine Street in Over-the-Rhine. For an affordable flat fee, entrepreneurs can book as few as three days, a week, or an entire month at a time to rent the space, and showcase and sell their wares. BrickOTR is open to anyone, not just those who come through its programs.

Along with taking a few classes with Mortar, Harper first booked time at BrickOTR in 2015. He’s been there twice this month, and plans at least one booking a month this year till at least November.

“It’s the best set up for me,” says Harper, who plans on having his own brick-and-mortar location in around five years. “BrickOTR is probably the reason why my brand has blossomed thus far. It’s only a few places that carry a lot of traffic like that.”

3CDC has provided some of Mortar’s funding for its accelerator program. “They’ve been a good partner for bringing opportunities to businesses that are minority- and women-owned,” says Gelter.

As the city works with groups like CDF, LISC Cincinnati and others to kickstart reinvestment in other neighborhoods, they’re baking in more equity from the get-go, including taking Mortar with them. It’s starting in the Walnut Hills neighborhood, which is also historically black. Mortar graduated its first accelerator cohort in Walnut Hills last August, already has its pop-up shop in place, and has two accelerator alumni in brick-and-mortar locations in Walnut Hills.