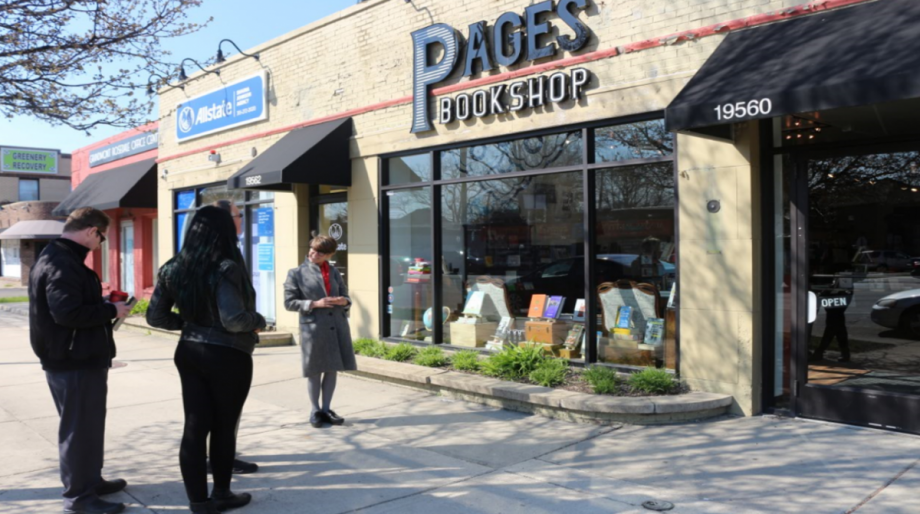 When Grandmont-Rosedale residents go out to eat, they leave their Detroit neighborhood.

“We have absolutely zero full-service sit-down restaurants,” says Martha Potere, economic development program manager of Grandmont-Rosedale Development Corporation (GRDC). There are some fast food, carry-out places, but people often head to the suburbs (or, more recently, downtown) with their dining dollars. GRDC did a study of the 2.5-square-mile area and found that within a 1-mile radius of 19120 Grand River Avenue, the main commercial corridor, residents spent $6.6 million a year at full-service sit-down restaurants; within a 3-mile radius, that number went up to $41 million, and within a 5-mile radius, it was $107 million. All those meal checks were paid outside of Grandmont-Rosedale.

“The economic leakage around these things is just devastating,” Potere says. She wants those dollars spent in the neighborhood, and residents tell her they would love more walkable lives. (It’s a 15-minute drive from Grandmont-Rosedale to downtown Detroit on average, according to Potere.)

To that end, GRDC and FoodLab Detroit recently joined forces and won a grant from the state to begin planning for a food hall that could foster a more robust restaurant scene and be a boon for the local economy overall.

FoodLab is a 5-year-old community of food entrepreneurs and its members are frequent shoppers at the GRDC-run Northwest Detroit Farmers Market, which has no brick-and-mortar home. The food hall could provide a permanent location for the market, while also creating a shared sit-down space for FoodLab.

Fifty-two percent of FoodLab’s 228 member businesses come from Detroit, the rest from areas nearby. Seventy-five percent are women-owned businesses; 63 percent are owned by people of color; 50 percent are owned by women of color. Their physical presence in the neighborhood would be a stark contrast with what Potere says she typically sees in the resurgent Detroit restaurant scene — mostly white, and mostly wealthy, or backed by outside investors with a lot of capital.

“A lot of the restaurants I see coming into Detroit have a lot of investment behind them,” she says. And they need it, she says, because so many commercial spaces in Detroit are in such disrepair.

Potere notes that Detroit has some of the worst average credit scores in the country, largely the lingering effects of continued redlining. “It’s hard for [Detroiters] to get capital in terms of business loans,” she says. “We want to create a space for them so they have a lower barrier to entry, to allow for smaller food entrepreneurs to enter the market.”

One FoodLab member, Detroit Vegan Soul, has already recognized the opportunity in Grandmont-Rosedale. They plan to open a second location of their all-vegan sit-down restaurant in the neighborhood in 2017 after securing a loan from the Detroit Development Fund to acquire and build out a space.

Devita Davison, FoodLab Detroit’s co-director, envisions that members who set up in the GRDC food hall will be able to use that as a launchpad into their own locations in Grandmont-Rosedale and beyond. There’s plenty of room for them in the neighborhood: Potere says the commercial vacancy rate right now is 17 percent, and there are opportunities to build more as well.

The first step for GRDC and FoodLab is a feasibility study, which the state grant will support. The $75,000, from the Michigan Good Food Fund, is meant to be catalytic. Each application had to show potential to leverage a loan from the $30 million fund alongside additional capital within a year. Applicants had to budget out a whole potential project, from design and planning to completion.

The food hall feasibility study will include selecting a site (Potere says GRDC currently has three spots in mind along Grand River Avenue), determining what kinds of food concepts residents would like to see in their neighborhood, and creating a marketing plan for potential investors.

The grant will also support designing the hall, which Davison wants to be a space for community gathering and organizing too. “You can’t have a massive community conversation in a damn booth,” Davison says. “You need communal tables, breakout classrooms, a community room.”

“It’s important to have a third space that is not organized from the top down, but really crafted and shaped by the entrepreneurial and community voice,” Potere says.

GRDC and FoodLab are looking at other models around the country, like Oakland’s Swan Market, for inspiration. At Swan Market, every menu has an item that’s $5 or less, as a statement that the space really is for everyone, Davison learned. On a recent visit, her vision for a Grandmont-Rosedale food hall was bolstered.

“I got to Swan Market early in the morning, before it opened, and I sat in the car, and I got really emotional,” she says. “Not only because of the climate right now in our country, but because as the doors opened and I saw the workers going in, it was a cornucopia of what America means to me, the diversity of entrepreneurs opening up their shop in this food hall, preparing for the day. As much as the food is a part of the food hall experience, the community that is built around it is even more important to me.”