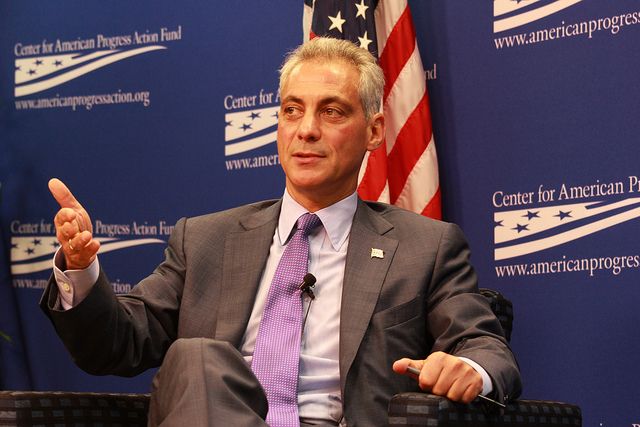 First up: A two-phase effort, totaling an estimated $200 million, to make green retrofits to Chicago buildings including schools, City Hall, libraries and police departments. Ultimately, the retrofits are expected to cut back on energy costs by about 20 percent.

The RFQ (read it below) yesterday went out to potential investors who would essentially become shareholders in the properties targeted for retrofitting. The idea is that these companies would front the money for the project, incentivized by returns that will come when the city’s collective energy bill goes down.

Retrofits to the city’s nearly 250 public schools — the target of the effort’s first, $100 million phase — would alone save more than $4.4 million in energy costs a year, city officials predict.

The built environment’s disproportionate impact on our carbon footprint explains why local governments have sought help in private groups, such as community development financial institutions, to make retrofits and cut back on all that wasted energy. Last year, a Deutsche Bank report found that when New York City made retrofits to 20,000 multifamily housing units (a move possible thanks to a grant from the philanthropist collaborative Living Cities), the result was indeed a nearly 20 percent reduction in energy use.

In Chicago, private money has certainly played an ongoing role in the development of public services: Today, the Rockefeller Foundation announced that it will put $1 million toward the development of a bus rapid transit system in the city. And reliance on private support hasn’t always worked out as planned, especially when it came to Emanuel’s former mayor Richard M. Daley’s decision to privatize the city’s parking meters.

But the Chicago Infrastructure Trust — and the partnerships that it will seek out — has raised specific questions about the extent to which private dollars can and should pay for services traditionally provided by city departments. With responses to the RFQ due by March 6, the retrofitting endeavor will represent a proving ground for what kind of role, if any, the trust plays in Chicago’s future.