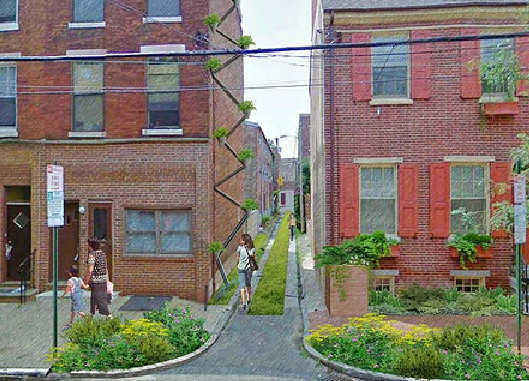 “GREEN city CLEAN waters QUEEN village,” one of the finalists in Infill Philadelphia’s Soak It Up design competition.

Until very recently, when builders, architects and urban planners thought about rainwater at all, it was almost always to design systems that funneled the deluge as quickly as possible into sewer pipes. But across the country, and particularly in cities like Philadelphia, stormwater management is becoming a central consideration in the design and planning not just of individual lots, but of entire neighborhoods.

The environmental and economic benefits of controlling rain runoff are huge, especially for cities with aging and maxed-out sewer infrastructures. Systems can be modernized and capacity can be added — at massive public expense — or cities can focus on slowing runoff, reducing the need for big new spending and giving treatment facilities a better shot at cleaning dirty stormwater before it drains to local watersheds.

But there’s another reason stormwater management is having something of a moment in design circles: It turns out you can do some pretty cool stuff with water.

That much was obvious at Infill Philadelphia’s Soak It Up awards last week at the Academy of Natural Sciences, which featured nine progressive stormwater-focused designs for three very different city sites.

There were rain cisterns subbing for windows at an old North Philadelphia warehouse, wetlands in place of parking spots outside a Pathmark, and a pitch for stackable, slow-draining water tanks that would do double duty as patio furniture for the rowhomes of the Queen Village neighborhood.

Each entry had the same aim: Dramatically slow stormwater runoff, enhance the beauty and quality of life at each site, do so as affordably as possible and design with replicability in mind.

Those criteria eliminated some of the go-to options for high-design stormwater management, such as intensive green roofs. But controlling rainfall doesn’t have to be expensive, as the designs showed.

To begin with, rip out as much concrete and asphalt as possible. This was the approach of the teams challenged with making something inviting and environmentally friendly out of a massive parking lot on a car-oriented thoroughfare beside a Point Breeze strip mall.

Gallery: Soak It Up Finalists

Names and renderings of several Soak It Up finalists. For more information about each, see Infill Philadelphia’s website.

The winning entry — by Philadelphia’s Urban Engineers, New York’s Mathews Nielsen Landscape Architects and Trenton, N.J.’s Spiezle Architectural Group — adds a greenway around the circumference of the lot, green walls on the mall’s sides and a “hidden river” plaza with a dry riverbed that flows after a storm.

A compelling, and winning, entry in the North Philadelphia warehouse rehab calls for carving out parts of the underused structure and turning them into rainwater-hungry public courtyards. The warehouse would be adorned with decorative and modular vertical cisterns, with an economic green roof rounding out the entry by Philadelphia-based Roofmeadow, In Posse and m2 Architecture.

The most intriguing entries, though, were those that examined greening of the grid itself; the city blocks that make up Queen Village. The contest asked planners, designers and engineers to “explore how to connect the neighborhood’s network of rooftops, rear yards, alleys, streets, and sidewalks into a comprehensive green rainwater collection system.”

The concepts are simple enough to grasp: Permeable alleys, planters beneath every downspout, cisterns aplenty and so on. The trick is in getting homeowners to adopt such measures en masse.

To date, public policy has focused on reducing stormwater on the big lots, for understandable reasons. “Large parcels mean less complication, high return on investment,” said Steve Benz of the OLIN Studio in Philadelphia, the winning entrant. “Contrast that to working in the neighborhoods; neighborhood politics, lots of owners.”

But for a high homeownership city like Philadelphia, getting a handle on stormwater eventually means working with homeowners. “Philadelphia has far too many neighborhoods to ignore,” Benz said.

OLIN (who had a long list of collaborators) designed a series of linking greenways that come together at Christian and 2nd streets in a permeable pavement plaza with perforated bleacher seats and an outdoor performance venue dubbed, naturally enough, the “rain stage.”

The design calls for greening of one of the city’s oldest neighborhoods that would be, in the long run, economical, environmentally friendly and a boon to quality of life.

While it’s far from clear that this sort of project is enough to enlist homeowners in the stormwater management effort, it seems an eminently worthy experiment. Public buy-in should be easier to come by if stormwater management is associated less with talk of impervious surfaces, and more with real-life examples of inviting and lush streetscapes.

Soak It Up, which featured $10,000 awards for three winners, attracted 28 entries from planning, design and engineering firms across the country. The finalists included teams from Seattle, New York, Portland and St. Louis, whose entries were evaluated by two juries. The ceremony was organized by the Community Design Collaborative, the Philadelphia Water Department and the U.S. Environmental Protection Agency.