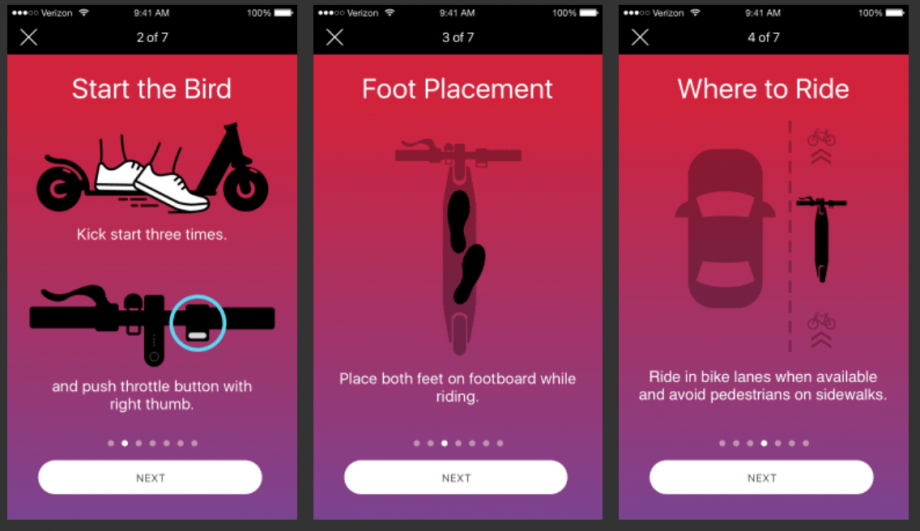 Park-‘em-anywhere electric scooters — i.e., adult versions of the Razor with a dockless twist — are now available on the sidewalks of San Francisco and San Jose, as well as Los Angeles and Washington D.C.

To coincide with its Bay Area expansion, Bird released a pledge entitled “S.O.S.,” or “Save our Sidewalks,” addressed to the CEOs of four dockless bike-share start-ups, LimeBike, Ofo, Mobike and Jump.

“We have an unprecedented opportunity to reduce car trips — especially the roughly 40 percent of trips under two miles — thereby reducing traffic, congestion and greenhouse gas emissions,” Founder Travis VanderZanden wrote in the document. “Yet, we have all seen the results of out-of-control deployment in China — huge piles of abandoned and broken bicycles over-running sidewalks, turning parks into junkyards and creating new forms of pollution, and new problems for cities.”

In the pledge, VanderZanden (formerly of Uber) makes three promises to cities: Bird will operate a daily pick-up program to retrieve all scooters and “reposition” them so they’re not cluttering up sidewalks; it will not increase the number of vehicles in a city unless they’re being used, on average, at least three times per day; and it will remit “$1 per vehicle per day” to city governments for research and infrastructure improvements. The document includes spaces for the other CEOs to sign.

The S.O.S. is a response to city regulators, who have been cautious of dockless bike-share start-ups. Last year, the National Association of City Transportation Officials (NACTO) released a statement saying that the “rogue” systems raise a bevy of concerns — among them sidewalk clutter. In January, Sacramento officials approved an ordinance that would ban riders from leaving bicycles in any position that would block sidewalks or bike paths, as Next City covered at the time.

But the aesthetic problems addressed by Bird’s pledge are secondary to another, deeper concern on the part of city officials: The companies’ funding structures. Bird, Ofo, MoBike, Waybots and Limebike are all start-ups buoyed by an infusion of venture capital up-front. (Bird recently raised $100 million in Series B funding, according to a release from the company). Regulators who have crafted bike-share systems as public-private partnerships that address long-term planning and equity goals worry that the competing start-ups will focus on rapid expansion in efforts to please investors rather than building a cohesive system.

Bird has also had its own share of run-ins with public officials, according to Curbed. In December, the city of Santa Monica “filed a criminal case against the company, accusing it of operating without proper permits and owing more than $6,000 in fines, accrued in part from riders using city sidewalks,” the site reports. Bird agreed to pay upwards of $300,000 as part of a settlement.

Still, the goals outlined in the pledge — particularly the second two — could net the company some municipal goodwill, provided it demonstrates self-regulation. The first is standard practice among a number of private dockless operators in the U.S., but the second two, particularly providing public funding, could go a long way toward winning over skeptics.

“We need to lead not just on technology, but on social responsibility,” VanderZanden wrote. “We hope that all of you join us in this S.O.S. Pledge to help our cities thrive.”