Digital vs. Analog Ways of Transforming Cities – Next City 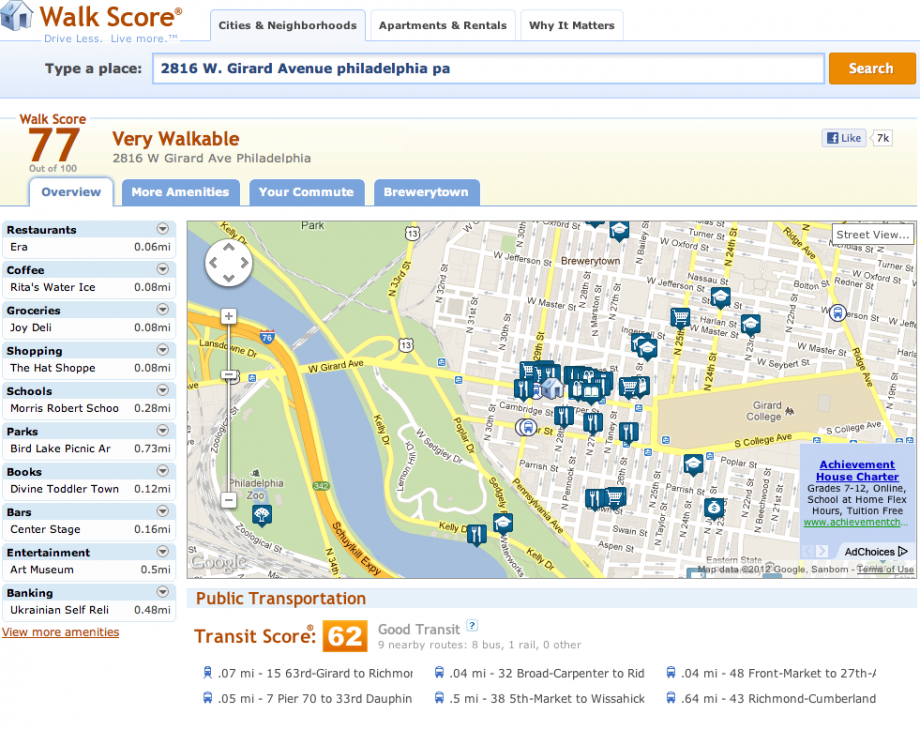 Walkscore, a favorite civic tech app, notes that our Storefront has a decent walkscore but an unfortunate transit score.

The other day I got a phone call from Josh McManus to talk about his work and Next American City’s Storefront for Urban Innovation. Josh is a Next American Vanguard who started a project called CreateHere in Chattanooga, Tenn. CreateHere has done remarkable job during the past five years to retain arts and culture in the city, develop a city visioning process, grow the city’s leadership and help local small businesses plan for growth. But Josh knew that he didn’t want to only affect Chattanooga and that many of the ideas he’d developed in Tennessee could apply elsewhere.

So he was lured to Detroit, where the Hudson Webber Foundation said that it wanted to see 15,000 people living in downtown by 2015. They had a vision but they still asked: How do we get there? Josh’s answer is a new project called D:Hive, a “toolkit” for Detroiters new and old. D:Hive sees that there is an essential challenge for many newcomers: “Greater Downtown Detroit can be hard to navigate for individuals seeking resources and information about finding a residence, starting a business or social enterprises, or learning about institutions that seek to assist them as they deploy their talents in the city.” But Josh pointedly mentioned that he isn’t going to create an app for that — instead he’s creating a storefront space to gather people and ideas in person.

As Next American City prepares to ramp up its Storefront and casts aside its print publication in favor of an online weekly, I’m constantly torn between the analog and digital. The question of how best to impact cities came up again last week upon reading about how Living Cities held its first Trends in Focus event. Its focus was none other than civic tech. If you have read Next American City’s Open Cities column, you know that we’ve been following the civic tech scene for a long time now. We’ve long been enamored with the way that technology can help engage citizens, help government do its job a little faster and for a little less money, and potentially transform the way we see and exist in our cities. That said, we also have had reservations about the digital divide (not just in terms of access, but digital literacy) and the way that digital technology sometimes works around, but fails to solve, our cities’ most pressing problems.

Living Cities is talking about this issue with a critical eye and a particular focus: low-income people. As Tracey Ross reports on the Living Cities blog, the panelists at the Trends in Focus event — four out of five of which were participants in Next American City’s Open Cities event in 2009 — came to these four conclusions about civic technology:

1. The innovation to date in this space has often been driven by the perspectives of technologists, and not yet fully informed by a clearly articulated agenda from city officials. 2. Innovations in Civic Technology are mostly transactional rather than transformational. 3. Information technology is spurring a renegotiation of responsibilities between citizens and government. 4. More concerted attention has to be paid to how these trends can be harnessed for the benefit of low-income people.

These are terrific points to make, and completely spot-on. Yes, it’s great to have an app that helps you route your commute on transit, but it’s also important to improve the transportation system itself — something an app just can’t do. Yes, it’s great that technologies like SeeClickFix or 311 are helping government do its job more efficiently, but it would be great to better understand how they benefit all citizens and not just the ones who are tech-literate. These critiques point to the right areas for improvement in civic tech. But what they don’t explicitly point out is that all the above points seem to represent challenges in leadership, in connecting people to technological opportunity, and in ideas. These aren’t technical difficulties: They’re softer problems of how we actually build communities in cities and how those communities and government collaborate to create economic and social opportunities for everyone. And that’s where the analog comes in.

This year’s Code for America fellows have arrived in Philadelphia and we’ve just invited them to present their work at the end of February at our Storefront. We’re going to invite our neighbors, local businesses and others to come and join us in this discussion. Hopefully the fellows will get some feedback before they head home to the West Coast. In our real-life chat room, perhaps we will step a little further away from the transactional and toward the transformational.