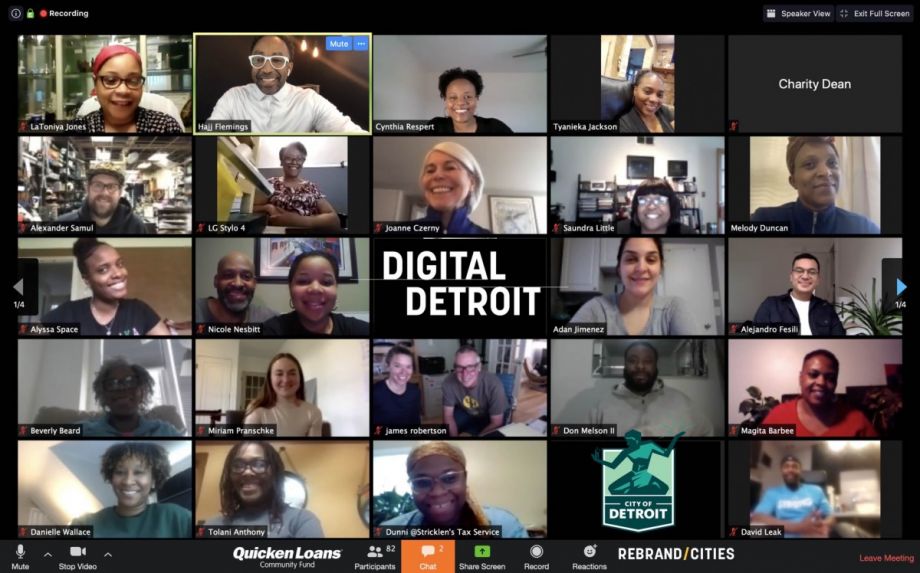 Some of the faces of “Digital Detroit,” an initiative to get the city's smallest businesses web presences in light of a global pandemic. (Screenshot courtesy Rebrand Cities)

Until recently, Sketch 2 Press, a graphic design and printing company in Detroit, had no website and no online presence. Still, owner Don Melson had a robust customer base through word of mouth and visitors to the brick-and-mortar shop.

All that changed due to COVID-19.

But then Melson came across a resource for businesses in the City of Detroit offering website development, content creation and consultation for businesses wanting to get online during the economic downturn stemming from the coronavirus. And it was all free of charge for him.

Digital Detroit is a partnership between the City of Detroit and Rebrand Cities, a global design company that seeks to get 10,000 small businesses online to curb the digital divide. Rebrand Cities currently works in cities across the U.S. and in Haiti.

As a graphic designer, Melson was knowledgeable about computers and moderately tech-savvy, he said. But when it came to websites, he lacked the knowledge needed to take his business to the next step.

Sketch 2 Press was one of 102 businesses in Detroit selected for the first five-week cohort with Digital Detroit, in an effort to help small or micro-businesses establish and grow an online presence.

“It was a learning curve,” Melson says. “I’m used to working on computers, but I don’t have any coding knowledge. I didn’t know how to do anything. So the learning curve was pretty steep.”

Hajj Flemings, founder and CEO of Rebrand Cities, said Detroit Mayor Mike Duggan began having conversations about the digital divide and COVID-19 effects earlier this year when it became apparent that the closures would hurt many small and micro operations.

“He saw the challenges we were having in the city in terms of small businesses and wanted to be on the front-end of trying to help get businesses online and make sure they were visible,” Flemings says.

The first cohort of businesses completed the course in July, and there are discussions about offering the program to another cohort. Quicken Loans Community Fund partnered with the City of Detroit to fund the pilot project.

“The reality is that we had people from at least three different generations, and so we realized [the importance of] digital literacy,” Flemings said. That meant not only learning how to use Zoom when some participants had never used the platform but becoming very knowledgeable with it. Rebrand Cities offered office hours during lunch time and at the end of the day.

“It was important that we could work around their schedules,” he adds.

“It really forced people to confront a reality that digital is not going away and if you didn’t have a presence your business may not exist anymore,” he says.

Another factor business owners had to consider was content creation for their new sites. Melson, for example, had to develop product descriptions and taglines for his new site.

Digital Detroit provided help with that as well.

“With the resources from the class, I was always able to have someone help me and I was able to achieve everything I wanted to achieve,” Melson said.

Of the business participants in the pilot project of Digital Detroit, nearly 30 percent offered professional services; 20 percent were food and beverage establishments; and 14 percent were apparel or fashion enterprises. Other business types included education, construction/real estate, beauty, health and fitness, and “other.” About a quarter (27 businesses) had been open for 10 years or more, according to data provided by Rebrand Cities. The program didn’t collect racial data on the cohort, Flemings tells Next City, but about three quarters of businesses were Black owned and two thirds were woman-owned.

“Many small businesses do not have the budget to invest in branding and website development, especially during this time when it is uncertain if they will be able to cover payroll and common business expenses. We are doing everything in our power to fill in the gaps for them,” Charity Dean, director of the Civil Rights, Inclusion and Opportunity Department at the City of Detroit, said in a statement announcing the pilot program.

For Melson, the web and social media presence has meant an increase in sales as well as streamlined workflow. No longer do customers play phone tag with him for an order. They simply fill out a form online and he receives it, completes the order and can ship it to them, if necessary. Though the majority of his customers are in the Detroit area, he has gotten some orders from out of state.

“It transformed my business tremendously. It gave me more reach. It gave me an online and social media presence,” he says.