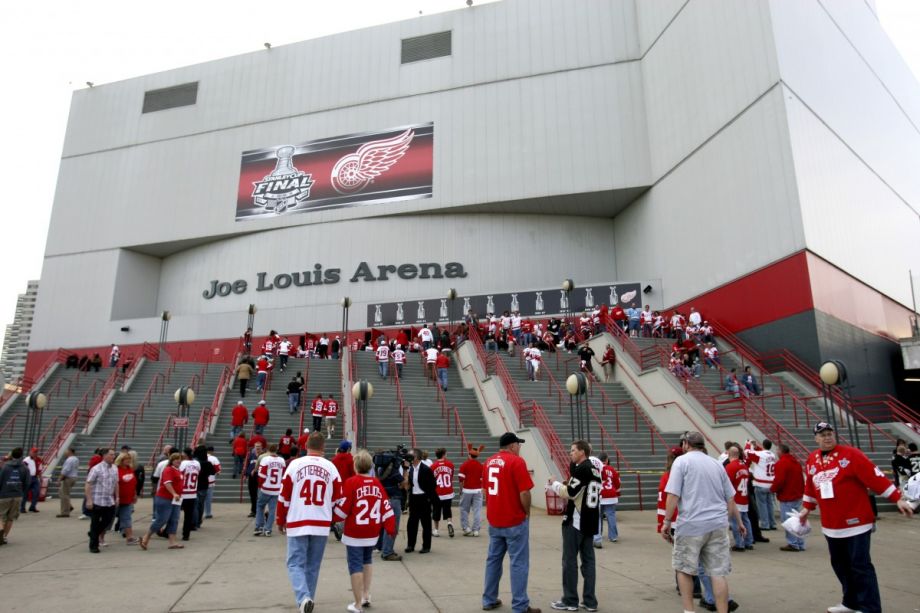 Should Detroit see the demo of a historic hotel to make room for a new stadium’s loading dock? (AP Photo/Carlos Osorio, File)

Construction on a new $550 million hockey arena for the Detroit Red Wings and a $200 million mixed-use redevelopment over 45 city blocks hangs on a key decision by the Detroit City Council. While developers want the arena to open at the start of the 2017 hockey season, council members have held up approval of their plan for months over questions on parking and historic preservation.

Tomorrow, refurbished plans go before the full council. Compromise is inevitable and necessary, but on these critical points, the council should stick to its guns. The Olympia organization, which is the development arm of the company that owns the Red Wings, was given substantial public funds and property. A more balanced approach to parking and, especially, the preservation of two historic hotels in “The District,” is not too much to ask.

There is already a lot to applaud in the newest version of the plan, especially the increased affordable housing. Developers propose that a full 20 percent of housing in The District, which is just north of downtown, is slated to be affordable. It is not clear how many total residential units will be in The District. This is a meaningful commitment in a city that needs to find a way to do redevelopment in an inclusive way — and, especially, in an area of the city where vacancies are among the lowest in the city. One point worth pursuing, though: The council should ensure that the promised affordable housing is integrated into the overall residential development, and not segregated into one particular corner.

And in a win for community advocates, the historic Hotel Eddystone will be preserved. Developers originally intended to demolish the 13-story structure that sits right across from the future arena, but they now propose to renovate it into 80 to 100 residential units.

The plan has other pluses: Olympia has said that it would transform two downtown surface lots into two new apartment buildings. Not only does this provide still more needed housing in the area, but it also fills in glaring holes in Detroit’s streetscape. Olympia has also committed to paying for infrastructure improvements in the arena district, which will benefit all Detroiters. That includes modifications to traffic signals and bike lanes.

It is fantastic that developers, advocates and city officials have pushed the plan forward in these ways. But why stop here?

The Detroit City Council could vote to make developers of a new stadium preserve the historic Park Avenue Hotel. (Photo by Andrew Jameson)

Next door to the Eddystone is the 90-year-old former Park Avenue Hotel. Developers want to demolish it, though they have been hazy about why, exactly, it cannot be salvaged. No structural compromising is cited. Instead, developers say vaguely that it is in a “high security zone” related to the arena. Also, they want to build an underground loading dock for the arena so that it has the capacity to function for events that are bigger than a hockey game. A surface-level public park would likely take the place of the demolished hotel. But if this is the cost of increased green space in The District, Detroit should not buy it. Because as Curbed put it, “Olympia has no excuse to demo the Park Avenue Hotel.”

Tearing down the Park Avenue would leave the restored Eddystone sitting strangely out of context in Detroit’s landscape. The hotels were both built in the 1920s by the same architect, and they present as a pair. Both are on the National Register of Historic Places, so that in addition to bringing urban character and glamour to the new arena district, federal tax credits are available to rehabilitate the buildings. Community members have also argued at public hearings that tearing down a legacy building is a high price to pay to build a loading dock to a venue that is expected to last only 20 to 30 years.

The way the proposed plan works now, Olympia cannot demolish the Park Avenue Hotel until it submits plans for the renovation of the Hotel Eddystone. But the survival of one should not depend on the death of the other. There is a Change.org petition to save the Park Avenue, which preservationists intend to present at tomorrow’s council meeting. They are also pushing for due process: City Council shouldn’t be the final word on the Park Avenue’s fate, they say. Instead, council members should push developers to bring any proposed demolition of a historic structure to the Detroit Historic District Commission, which would make a decision that should, with council support, be respected by the developers.

Parking is the other big battlefront. The new plan proposes an 1,100-space parking garage next to the arena — down from 1,200. This is partly good news: Detroit has a bizarre history of preferring surface lots to garages, and it’s nice to see the city pivot away from that. But in this case, the garage will slate nearly all of the spots (800) to high-paying purchasers of suites at the arena. The garage would sit right next to the venue — convenient for patrons, but, in a residential community with relatively narrow streets, it promises a foreboding traffic knot and an assault of noise.

Alternatively, one councilwoman proposes cutting the garage down to 600 spots. Developers might accept her proposal, and perhaps also build a second 600-space garage nearer the main thoroughfares and highway exits. They could easily plan for a shuttle service to ferry guests from the second garage to the arena, greatly reducing traffic.

Construction machinery has appeared on the arena site, including a bright yellow bulldozer — a sign that construction could begin “in several weeks,” according to a company spokesperson. But nothing can start until the council has approved the rezoning requirements in the new plan. It’s hard to imagine that the massive equipment wasn’t hauled onto the site to quietly pressure council members to accept the proposed plan as is.

But it bears repeating that the arena is 58 percent publicly funded, and no revenues will go back to Detroit: Olympia will keep all profits for itself. Technically, the quasi-public Detroit Downtown Development Authority will own the arena, but it will lease it to the Red Wings for free.

Think of that: The private company does not own the arena, and it is less than half the cost construction, and yet it keeps 100 percent of the profits.

The city is banking on the project to create jobs for Detroiters and to revive a patchy portion of the city. (Many of the neighborhood’s dilapidated structures had long been owned by the Olympia family of companies, in anticipation of building a new arena. Their neglected condition was caused by the very company that stands to benefit by the perception that it is “reviving” the neighborhood with the new arena.)

Okay, then. That’s where it’s at now. It is not too much for Detroit to ask — no, not ask, to require — that Olympia adjusts its parking plan with resident quality of life in mind, and to preserve both historic hotels.