Designing Dignity in Housing for Chicago’s Most Vulnerable – Next City

Designing Dignity in Housing for Chicago’s Most Vulnerable 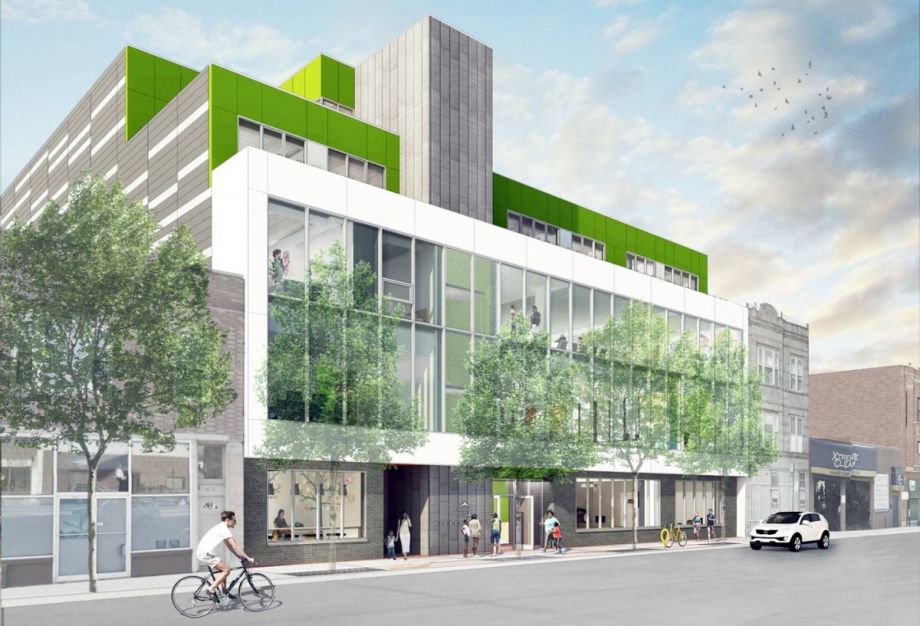 The day that Sol Flores followed her aunt downstairs to meet two strangers in the basement at Chicago’s San Lucas United Church of Christ, little did she know that 15 years later she’d be breaking ground with them on a new permanent supportive housing development down the street for formerly homeless or at-risk youth and families with children.

“My aunt was deacon of the church at the time, and she said ‘hey will you come down and listen to these guys, they want to do something in our neighborhood’ and I said okay,” Flores remembers. “You just do what your aunt says, you don’t question it.”

The two strangers were Keith Decker and Peter McQueen, whom Flores describes as two longtime friends and Vietnam vets who had turned to a life of service and volunteering as a form of healing. In their volunteering throughout Chicago, says Flores, they noticed a lack of services and long-term housing for homeless youth.

It’s not just a Chicago problem. The National Alliance to End Homelessness currently estimates that every year, around 550,000 unaccompanied, single youth and young adults up to age 24 experience a homelessness episode of longer than one week, but only 50,000 homeless youth per year receive services tailored for them.

“They started going around, asking people, ‘hey is this something you’re interested in?’ Some were too busy, some thought, ‘they are crazy,’” Flores says. McQueen, an ordained pastor in the United Church of Christ, made sure they used that church network as a way into different neighborhoods, to determine which one felt the need was great enough to invite them in to help provide more services and housing for homeless, at-risk youth.

“That was important, because these are two white guys, not from the West Side, and so there’s obviously always fear and mistrust about what are you coming into our community to do,” says Flores, whose grandparents and parents migrated from Puerto Rico to Chicago in the 1950s and 1960s. “Particularly with this type of work you have to have local support.”

Flores eventually became the founding executive director of La Casa Norte, with Decker and McQueen as founding board members. While they serve 43 ZIP codes in Chicago, they’re based in the same historically Puerto Rican neighborhood of Humboldt Park on the West Side of Chicago, down the street from San Lucas. The organization provided 4,525 people last year with services to prevent or end homelessness, and 348 youth with beds in their emergency shelters, and distributed 29,969 meals. They currently have 85 employees and an annual budget of almost $5 million.

La Casa Norte’s new 5-story development, now under construction at 3527 W. North Avenue, will include 25 units of studio, one- and two-bedroom units of permanent supportive housing for unaccompanied youth ages 18 to 25, or families with at least one child under the age of 18. It’ll be the first time they’ll be able to provide permanent supportive housing under one roof. Until now, Flores says, they’ve done scatter-site permanent supportive housing, renting units in the area. Now, they’ll be earning the rent, up to 30 percent of any eligible income of tenants — though, zero income, zero rent, says Flores. It’s a small incentive for La Casa Norte to get tenants into stable, fulfilling jobs and careers. Under the terms of the project’s financing, any rent paid must go back into programming at the site.

But more than cost-effectiveness, permanent supportive housing is largely about dignity, and the whole Chicago development is built around that ideal.

The first floor will include a cafe, a teaching kitchen and a choice food pantry designed to promote healthy eating habits. Instead of coming to the pantry and receiving a pre-packed bag of food that may or may not match a family’s preferences or food allergies, pantry recipients will have the opportunity to pick out a pre-set amount of food in a grocery style setting, including fresh produce. “It’s respectful, but it’s also educational,” Flores explains.

There will also be a health and wellness clinic on the first floor, with capacity for 5,000 patient visits a year. For the clinic, La Casa Norte is partnering with Howard Brown Health, which started out in 1974 specializing in care for lesbian, gay, bisexual and transgender patients. “They’ve also been working with homeless youth for 20 years,” says Flores. “For us, when we thought about who to partner with, it had to be with an organization whose culture and mission is very closely aligned.”

The second floor will include a community meeting area, an art gallery and administrative offices; housing will be on three floors above.

The sense of dignity extends to the design, by Chicago-based Landon Bone Baker Architects. The firm has worked on a lot of affordable housing developments in the city. (LISC Chicago provided a pre-development loan to finance the design work, and it took so long to raise the capital for construction, La Casa Norte had to ask for three extensions on the loan, says Flores.) La Casa Norte involved clients and staff in the design process, putting all ideas on the table for what the development could do.

Not every idea made it. Flores pushed hard initially to have a daycare onsite, to help with single parents seeking jobs or housing. But the building codes for daycare required so much square footage per child that a center with the desired capacity would have taken up all the available community space. In the end, no daycare center.

When the first iteration of the design came back, it was a letdown. “I was so excited to see it, and then I saw it and my heart just sank,” Flores remembers, “I was like, ugh, this looks like public housing, and that’s a terrible thing to say. When you think about our history of how public housing has been designed in this country — cheapest, institutional, concrete-looking scary fortress.”

They pushed back and asked for a more inspiring, more creative design. It took about 15 iterations to get it right, Flores says. The final design is more expensive, but embodies the dignity of permanent supportive housing.

“It’s not this dark, scary, dirty place where homeless people go,” Flores says. “These families, these young people are going to get to live in new, beautiful housing that for them immediately helps to uplift a sense of dignity and safety.”

With the design in hand, the six-year journey had only just begun. To finance the $17.2 million in total development costs, La Casa Norte tapped city loans, $3.5 million from Chicago’s tax increment financing (TIF) funds, the Illinois Affordable Housing Tax Credit, federal New Markets Tax Credits, and around $6 million in donations from 50 local Chicago families and individuals. “Some had never given money to us before,” says Flores.

Along the way, elections repeatedly slowed things down. A new mayor and new alderman in 2011 meant starting over with city loan and TIF financing conversations from scratch. “It was worse than square one, maybe negative two,” Flores says.

At one point, former Illinois Governor Pat Quinn announced a big state grant for the project at a fundraising gala for La Casa Norte, only to be unseated in the following day’s election. That grant got nixed.

The TIF application process was also time-consuming — although, Flores says, it far exceeded her expectations in that they got anything at all.

Through all that, Flores had to push back against sticker shock on the pricey design. “I have had to defend that aesthetic for many years when I was showing our plans to donors, to planners including public planners, and they’ve said ‘wow, why does it have to look so nice?’ Or ‘that’s a really expensive curtain wall,’” she says.

In the end, dignity won.

“A lot of our clients have experienced trauma and have been a victim of many different systems, so there’s a lot of mistrust, and we want to eliminate barriers to providing them services,” Flores says. “That means they can feel a sense of dignity, when they can see into the space and be like, ‘wow, this beautiful place is for me, I get to go there and get services, that’s where I’m going to hang out, that’s where my family is going to live.’”

“It puts a stake in the ground,” Flores says. “We know there is going to be diversity in this neighborhood. Whether or not market forces work against us, 20 years from now, there will be diverse people living in that community as a result of our development.”