Despite What Planners Say, Densification and Railways Go Hand-in-Hand in Indian Cities – Next City

Despite What Planners Say, Densification and Railways Go Hand-in-Hand in Indian Cities 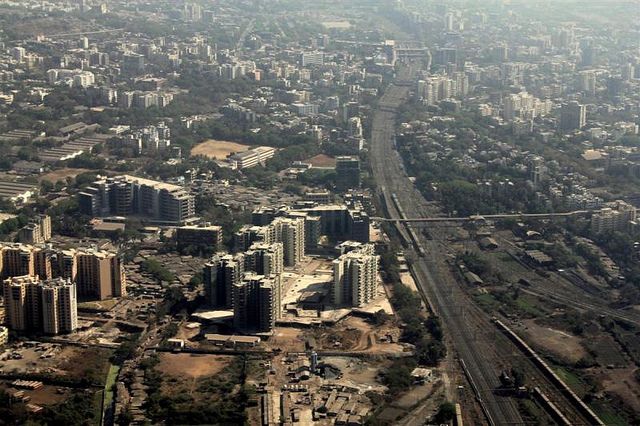 Most central parts of Mumbai have a floor space index of only 1.33 — very low for a large city. Credit: Dharmesh Thakker on Flickr

Inner-city metros may get all the press, but with 3.6 million boardings each weekday, the Western Line of the Mumbai Suburban Railway is the real transit workhorse of India’s largest city. With twice the ridership of New York’s busiest subway line and only four tracks, the main artery into the business districts of South Mumbai is obscenely crowded and desperately needs relief.

That relief was supposed to come in the form of a 63-kilometer (39-mile) Western elevated rail corridor. The idea is to build two tracks above the existing at-grade Western Line to relieve its crowding, descending to ground level at times and then underground at the most congested segments. It has, however, hit a few snags, one of which is a competing Mumbai Metro project along the same corridor.

But the other has to do with unusually strict zoning in Indian cities. Perhaps unique in the world, India’s large cities are zoned for very low floor-area ratios (floor space index, or FSI). Aside from special redevelopment projects, the most central parts of Mumbai are zoned for an FSI of just 1.33. This commonly used measure represents the amount of buildable square footage as a ratio of the lot’s size — an FSI of 1 would mean you could build a one-story building filling the whole lot, a two-story building filling half the lot with the other half left empty, a three-story building filling a third of the lot, and so forth. (For reference, a detached suburban home might have an FSI of less than 0.5, while a six-story New York City tenement has an FSI of four or five. A skyscraper could easily reach 10 or 15.)

Normally this only affects the built environment, but in the case of the Western railway elevated corridor, it has also become problematic from a transit point of view. To cover the $3.35 billion cost of the project, Indian Railways planned to reserve some of its parcels adjacent to the line for development, hoping to capture some of the value created by the new transit link. To do that, the government would have to allow more development than the paltry 1.33 FSI for which the land is normally zoned.

“We have asked for FSI up to five for our [13] different land parcels to get optimum utilization of railways’ land,” an Indian Railways board member said in September, “but the state government is not agreeing and has said that it would permit need-based FSI only.” Instead, the Maharashtra state government said it would allow density of up to four under special circumstances.

It’s far from the only time a conflict has cropped up between building new rail lines and upzoning in Indian cities. In Pune, a rapidly growing city not far from Mumbai, a proposal to rezone the metro corridor for an FSI of 4 eventually passed despite criticism from urban planners, who called it far too dense for the city.

Much of the debate depends on what kind of development will appear. As one planner points out, “The FSI is a secondary issue because it basically depends on income levels of families that are going to utilize them. Four FSI is possible in Malabar Hill area but not in Dharavi.” (Malabar Hill is an upmarket residential area in Mumbai, whereas Dharavi is a densely packed slum.)

Many also seem to operate under the assumption that new development will be just as tightly packed as single-story slums. The Times of India, for example, has repeatedly assumed that new apartments will be only 50 square meters (538 square feet) and house five people each — essentially slum-level density.

Alain Bertaud, a former World Bank researcher who’s now at the NYU Stern Urbanization Project, has argued that the extreme density of Indian cities on a per-square-foot level is not immutable, and may in fact be a result of extreme restrictions on density. “If people in Mumbai want to consume more than the current 4.5 square meter of floor space which they squeeze in,” Bertaud writes, “some developers would have to build additional floor space somewhere or several million people would have to leave Mumbai to make room for those who can afford more floor space at the current high prices.”

Bertaud savages the current regime as “Malthusian,” and says it fails to take into account the growing amount of floor space consumed as cities grow and their citizens become wealthier:

The current urban policy may be qualified as “Malthusian” because it has been consistently reluctant to consider that an increasing population was a sign of success rather than of failure. With an estimated average of about 4.5 square meters per person in 2009, the consumption of residential floor space in Mumbai is one of the lowest in the world and would be expected from a city in a desperate economic situation. As a comparison, consider Shanghai in 1984: recovering from more than 10 years of Cultural Revolution, it had a floor area per person of 3.6 square meters. Shanghai’s Municipality considered that rapidly increasing floor consumption was to be the city’s first priority, and by 2010, the average floor space consumption in Shanghai was 34 meters per person.

Shanghai is one example, but closer to home we can see something similar at play in New York. As subways were built, the densely packed tenement districts of the Lower East Side rapidly emptied out (along with, to a lesser extent, the rest of Manhattan). The population still increased, but not as fast as the building stock. A floor in a tenement that used to hold 16 people, for example, now might hold just four.

Mumbai, though, is moving in the opposite direction of most cities, which are constantly expanding the amount of floorspace that can be built out, commensurate with an increase in population and wealth. Bertaud explains:

Most cities of the world therefore have a policy to increase FSI with time. This progressive increase in FSI has two purposes: first, it allows households and firms to consume more floor space as their incomes increase without having to move to new areas in the suburbs; and second, an increase in FSI contributes to a decrease in the city’s spatial expansion into the countryside, decreasing population dispersion, transport costs and pollution due to transport. In addition, in most cities, planners practically always establish the regulated FSI at a higher level than the FSI of existing buildings. This practice encourages the redevelopment of obsolete buildings. By contrast, the practice in Mumbai has been to decrease the permitted FSI over time, resulting in obsolete buildings that can never be redeveloped economically because the new buildings would have a smaller floor space than the building they replace.

Bertaud’s ultimate recommendation is to end the practice of restricting developable floor space in an attempt to reduce population density, and to allow the city to grow to the same heights as its peers across the world. Pune has, to the chagrin of many planners, begun to do just that with its metro corridor rezoning. Mumbai has not.