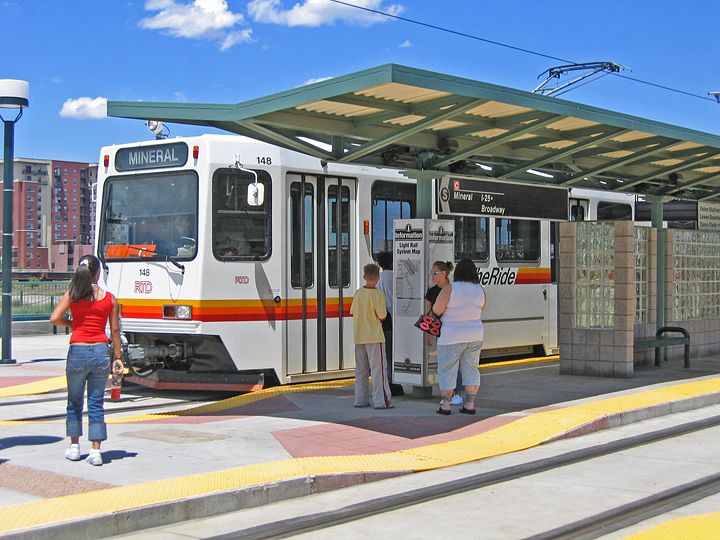 A light rail station in Denver. faceless b via Flickr

Walking to one of the stations on Denver’s rapidly expanding light rail, one notices how the city is delivering on its promise to citizens to become a more transit-oriented metropolis.

In 2004, with one rail line built and another under construction, the city’s voters approved a 0.4% sales tax to finance the Regional Transportation District’s (RTD, the local transit authority) 140-mile light rail, commuter rail and bus rapid transit FasTracks project. In all, six new lines would be built and four extended. Denver’s mayor John Hickenlooper heralded the program, saying it would allow the city to add a million people without increasing congestion and reducing sprawl.

Transit and denser, more livable cities have long been proven to go hand in hand. Streetcar suburbs of the first half of the past century exemplified this form of urban development and new transit lines are often the catalyst for new communities today. A well known contemporary example is Arlington, Virginia’s Wilson Boulevard corridor, which, after five new Metrorail stations opened in the 1980s, was transformed into a lively string of neighborhoods filled with mixed-use developments, street side cafes and a distinctly urban vitality.

As part of FasTracks, Denver is in the midst of a massive redevelopment of its Union Station area, which includes 2.5 million square feet of new commercial space and 900,000 square feet of residential space. Last month, Denver International Airport unveiled its South Terminal Development, including a new hotel and retail space, atop the terminus of the new East Corridor from downtown. Kim Day, manager of aviation at the airport, said at the groundbreaking of the corridor on August 26 that she envisioned the rail line turning the south terminal into a “destination” in and of itself, sparking new, non-flying trips to the airport.

Of course, transit is not the only method to remake American cities. Yonah Freemark’s recent Grassroutes column on the success of Knoxville’s pedestrian-only Market Square is a prime example of this, though transit is an undeniably a strong catalyst.

FasTracks has not gone as planned. Costs quickly spiked and sales tax receipts came in lower than expected. One light rail line, the 12.1 mile West Corridor to Golden, broke ground in 2007 but the fate of the other eight lines and extensions was left in limbo. Instead of vastly cutting the program, RTD looked outside the box and opted for a public-private partnership (PPP), dubbed Eagle P3, to finance two – the 22.8 mile East Corridor and the 11.2 mile Gold Line – of the remaining corridors.

The East Corridor groundbreaking was the culmination of that effort. Denver Transit Partners, the consortium selected by RTD, provided more than $450 million in private financing to the project and cut overall construction costs by $300 million – freeing up nearly $800 million for other lines. But the deal, which is the first in which a private concessionaire will build, finance and operate a transit line in the US, represented more than just a new rail line in Denver. In the words of Greg Amporano, project director of Denver Transit Partners, it establishes a “benchmark” for rail transit financing in the US. Cities such as Charlotte and Dallas can look to its model as they struggle for ways to complete their own transit expansion programs as traditional financing sources shrink.

Innovator as it is, Denver is not without its problems. The remaining seven FasTracks corridors remain largely unfunded and RTD is considering asking voters for another sales tax hike to complete them in 2012. Financial problems or not, if Denver’s existing success at redefining itself as a transit-oriented metropolis is any example, the city is already well on its way to becoming a model for the country.