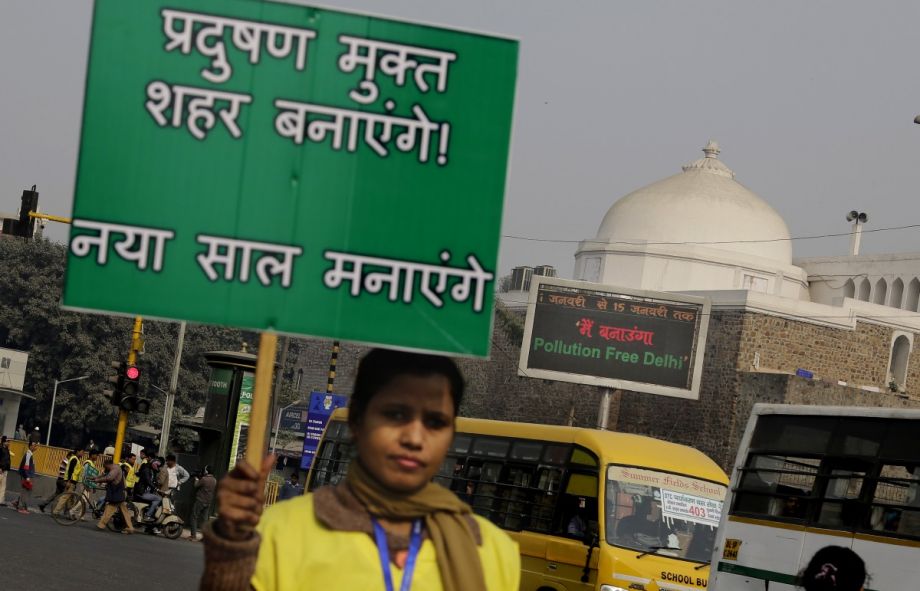 A volunteer holds a sign in Delhi that reads, “We will make a pollution free city” on the first day of a two-week experiment to reduce the number of cars to fight pollution. (AP Photo/Altaf Qadri)

With nearly 10 million vehicles, Delhi was branded the most polluted city in the world by WHO in 2014. In December, the city saw its worst air quality to date. The pollution levels were so high that the government put into effect an emergency “odd-even” policy, for a two-week period, to reduce the number of cars on the roads.

The odd-even policy, effective since Jan. 1, required residents to drive their cars on alternating days, according to the last digit of their license plate. This is not a novel idea. Cities around the world battling pollution have experimented with this tactic, including Paris, Mexico City and Beijing.

Delhi’s policy only applied to private cars. Motorcyclists, scooters, autos and female drivers were exempt from the rule (for safety reasons). Those who violated the policy were subject to a fine of $30 U.S., and traffic police around the city were increased to identify violators.

Barun Aggarwal, Delhi resident and CEO of Breathe Easy, a company that consults locally on how to have more “breathable” air in their offices and homes, is enthusiastic about the initiative. “Odd-even policy has been a game changer in terms of raising awareness about the issue of air pollution,” he says.

Beyond getting Delhiites just talking about air quality, it’s helped take cars off the streets and unclog Delhi’s notorious traffic.

“It has been great at reducing traffic congestion, and most importantly, it has changed the mindset of the people to try something different — Metro, buses, walking, cycling, carpooling,” he says. “This in itself is a huge success for odd-even.”

Aggarwal, who would normally drive to work, tried all different modes of transport this week, from the Metro to walking to taking an auto rickshaw.

The policy is in effect till today, which Aggarwal thinks is the “perfect” time frame.

“It inconveniences people, but just enough that it does not motivate them to go and purchase another car,” he says. “If this was any shorter, it may not have the desired effect, and any longer, it may end up with a negative impact with people going and buying second, third cars.”

The billion-dollar question, though, is did the policy work when it comes to real pollution relief? According to the Center for Science and Environment (CSE) in Delhi, it did — if only temporarily.

A report published Monday by the CSE says that vehicles are the second leading cause of pollution, after road dust. With fewer cars on the streets last week, the levels of PM 2.5 (the fine dust particles that can settle in the lungs and cause serious long-term damage) did fall, especially in comparison to the worst days in December.

According to the report:

Winter conditions in Delhi make matters worse. Cold temperatures, little wind and dense fog “trap air and pollution,” the report states. Despite this weather combo, which causes spikes in pollution every year from December through February, the report points to a positive impact.

In terms of making a long-term difference on air quality, however, Aggarwal argues that an odd-even policy alone isn’t enough to make a lasting difference.

Indeed, there are other major polluters in the capital. There’s the common practice of burning of household waste, and businesses and manufacturers have limited environmental regulations.

However, while the odd-even approach may not give Delhi blue skies, it has got locals rethinking transport. The pilot program inspired a bevy of apps to help residents with carpooling and navigating the streets. Delhi Metro, which increased buses and trains during the two-week trial, has indicated it will review its usual train schedule with regards to frequency.

A willingness to adapt is a powerful tool in what could be a decades-long fight. As the CSE reported, “It is also important to note that the people of Delhi and neighbouring states are following the rule — it shows their cooperation and their desire to be part of the solution to check this toxic and deadly air pollution. It is clear that we need to do more and not less to arrest air pollution.”

Esha Chhabra is a journalist who covers social impact, technology for development and public health.