Where Housing Policy Intersects With Homelessness in D.C. – Next City 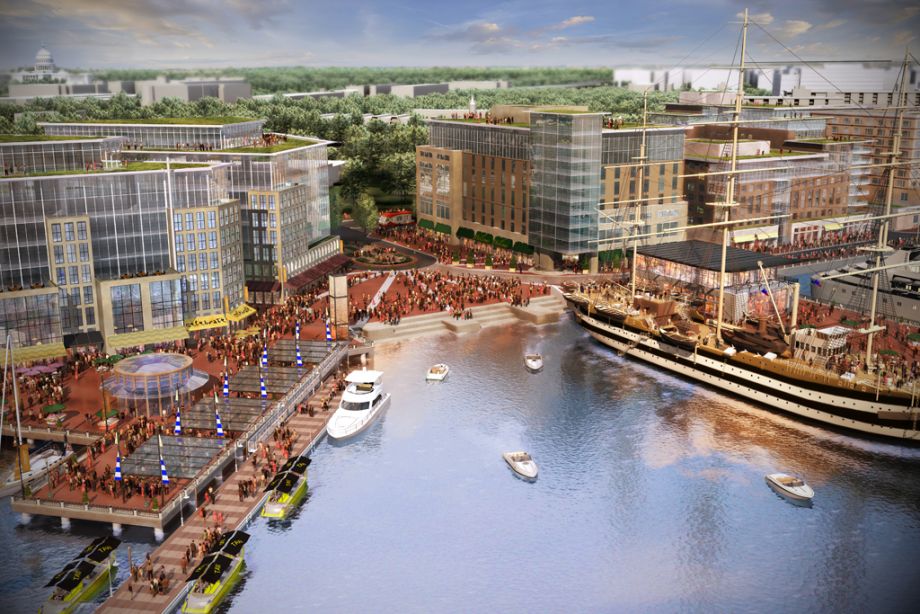 Plans by Perkins Eastman for developing Washington, D.C. waterfront into “The Wharf”

In a tale that mixes a city’s growing class divide and Dickensian conditions in a public facility, two Washington, D.C. news stories — the ongoing fiasco at General Hospital, where hundreds of homeless families are being warehoused, and the groundbreaking for The Wharf’s upscale housing and retail at the Southwest Waterfront — intersect to show how a city’s housing policy can exacerbate its homelessness problem by driving up building costs and limiting supply of new homes.

Since 2010, the same year that D.C. General Hospital was reopened as a family shelter, individual homelessness has increased by 18 percent in D.C., and by 50 percent for families. In the last three years, the shelter has become a public health crisis, rife with vermin, and oftentimes lacking heat or hot water. Conditions only worsened this winter, when a flood of new families pushed it to maximum occupancy, and reached a breaking point in March, when eight-year-old tenant Relisha Rudd was kidnapped and presumably murdered by a custodian.

D.C.’s increase in homelessness (and the need to open the shelter) has been driven largely by rising housing prices that won’t become any more affordable as long as D.C. keeps regulations that prevent housing development from keeping pace with growth and make building unnecessarily expensive. (From 2000-2010, median rental prices rose 50 percent beyond inflation.)

Take the long-delayed $2 billion Wharf project where, according to the Washington Post, the developer was forced to burn through millions in personal savings and run deficits for five years, nearly impelling him to bail out. Just south of the National Mall and about two miles from General Hospital, the project promises retail, entertainment, lodging, parkland and 648 apartments along four blocks of a marina.

Yet, that glittery future didn’t prevent the Wharf (which is getting $200 million in city funds) from going through a massive regulatory process: The project endured nine years of delay, caused not only by market fluctuations, but by 500 public meetings, an approval process involving more than two dozen government agencies, and the passing of three laws by Congress. The Congressional action was required to transfer the once-federal property to a city-run development corporation. The public meetings were held to pacify neighborhood opposition, and eventually led, as is often the case, to expensive extractions from the developer. Buildings were scaled down, and community pressure ensured that 20 percent of commercial space will go to “unique” retailers.

Of course, the Wharf’s woes aren’t directly responsible for the homelessness seen at General Hospital. But insofar as it reflects the regulatory climate that exists citywide, it also reflects what is causing affordability problems. The most notorious of D.C.‘s regulations are century-old ones that cap building heights at 130 feet, thus limiting the amount of housing that can go on given lots.

But legal minutiae and NIMBYism delay or altogether kill large projects too. For example, the massive CityCenter project that is meant to transform downtown has endured its own eight-year approval process. A mixed-use development proposed near the McMillan Reservoir still hasn’t broken ground, due to officials kowtowing to neighborhood resistance. For the privilege of opening the first of several stores on the east side, Walmart has paid millions in lobbying and community benefits expenses. And the list of projects that have been discouraged goes on and on.

Collectively, writes Cato Institute economist Randal O’Toole, these “planning penalties” add $135,000 to the costs per unit in DC. Such expenses are paid upfront by businesses, but ultimately get passed onto consumers, making the idea of owning — or even renting — housing impossible for many residents.

Of course, cities that are politically similar to D.C. also have these regulatory climates — and thus struggle as well to keep housing affordable. Displacement and homelessness has recently increased not only in D.C., but New York City, San Francisco, Portland and Seattle. These cities have addressed the problem with numerous programs that either directly address homelessness, or aim to preserve the affordable housing stock. D.C. Mayor Vincent Gray’s response to General Hospital has been to start a transitional program called “500 Families, 100 Days,” which would move tenants into stable housing, while eventually closing the shelter. These cities also generally experiment with some combination of rent control, inclusionary zoning, developer-funded housing trusts, or the “mixed-income” model used for the Wharf.

The effectiveness of such programs remains much debated, with liberals claiming that they preserve affordable units, and conservatives arguing that they merely discourage construction. But both sides must readily admit that, even if these programs work, they are but a band-aid for the more structural problem of under-supply and over-regulation. This has produced housing shortages, and subsequent affordability crises, in many of America’s great cities. And while that may not hurt the local political classes, it has very real effects on poorer residents, many of whom are driven elsewhere, or forced by necessity into places like General Hospital.