How Dallas Plans to Tackle Concentrated Poverty – Next City 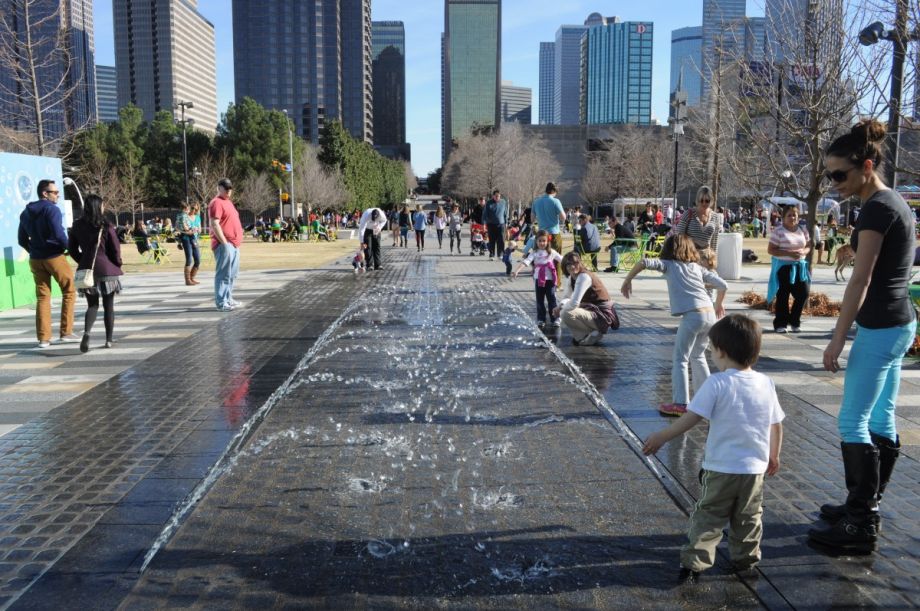 Much, though certainly not all, of Dallas’ neighborhoods of concentrated poverty are in the southern half of the city, which has survived decades of disinvestment and blight. With a larger population than Atlanta, southern Dallas has been, according to one local editorial writer, let down by a string of mayors. 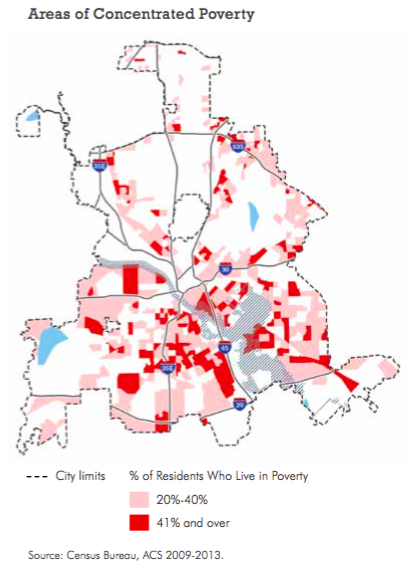 Current Mayor Mike Rawlings is hoping to reverse that trend.

In 2012, Rawlings launched the GrowSouth initiative to engage the neighborhoods of southern Dallas, improve schools and create an investment fund for the area, among other goals.

Such ambitious aims can be difficult for a Dallas mayor because unlike many cities of similar size, says Peer Chacko, chief planning officer, the Texas city has a weak mayor system. The Dallas mayor, while elected citywide, has just one vote alongside 14 other city council members, who are each elected to represent their own district. Together, they oversee the city manager, who acts as the chief executive of city government.

One of the things a Dallas mayor can do: Keep a spotlight shining on key themes and create platforms for partnerships across sectors and districts. Chacko credits Rawlings with spearheading the creation of a nonprofit that will help to implement Neighborhood Plus, a new plan to promote healthy, sustainable neighborhoods.

The plan is, in large part, a response to a 2013 letter from HUD citing the city’s noncompliance with three civil rights statutes. The city partnered with many groups to help draft Neighborhood Plus, including HUD, as well as the Inclusive Communities Project (the Dallas-based group behind the suit in the landmark Supreme Court case from last year).

“The plan began with the housing issue, but very early on in the process we significantly broadened the effort and really changed the way the city does business around neighborhood development,” Chacko says.

Neighborhood Plus is both broad and targeted, working across the city to effect policies and programs that could help all Dallas residents living in areas of concentrated poverty, while also working to drive collective efforts neighborhood by neighborhood. The focus is on three neighborhoods to start, all in southern Dallas.

“Ideally, the city is picking a handful of target areas to see visible impact before scaling up geographically,” Chacko says.

The nonprofit will raise private funds to hire a general manager for each neighborhood, and that person will work within each community to determine priorities and seek private and public partners to address whatever agenda is set.

“The nonprofit also puts us in a more competitive position to pursue partnerships with national groups supporting this kind of work in different ways,” Chacko says. “It’s important to distinguish it will be more comprehensive than a traditional CDC that might, largely for capacity reasons, be focused on housing or another single issue at a time.”

Neighborhood Plus capitalizes on some Dallas policies and programs already in place or in motion. Chacko points to the success of a tax abatement program for businesses that move to southern Dallas and bring jobs.

The tax breaks have helped create several hundred new jobs a year in southern Dallas, he says. While it’s difficult to pin down whether those jobs have gone to existing Dallas residents from areas of concentrated poverty, Chacko maintains that there are plenty of openings that those recently relocated businesses have not been able to fill, meaning that there is opportunity for the city to step in with relevant job training programs.

Neighborhood Plus discussions have also helped to push along related conversations around creating what would be Dallas’ first citywide affordable housing plan.

“Hopefully by the middle of this year,” Chacko says.