Bicyclists and Pedestrians, the Best of Frenemies – Next City

Bicyclists and Pedestrians, the Best of Frenemies 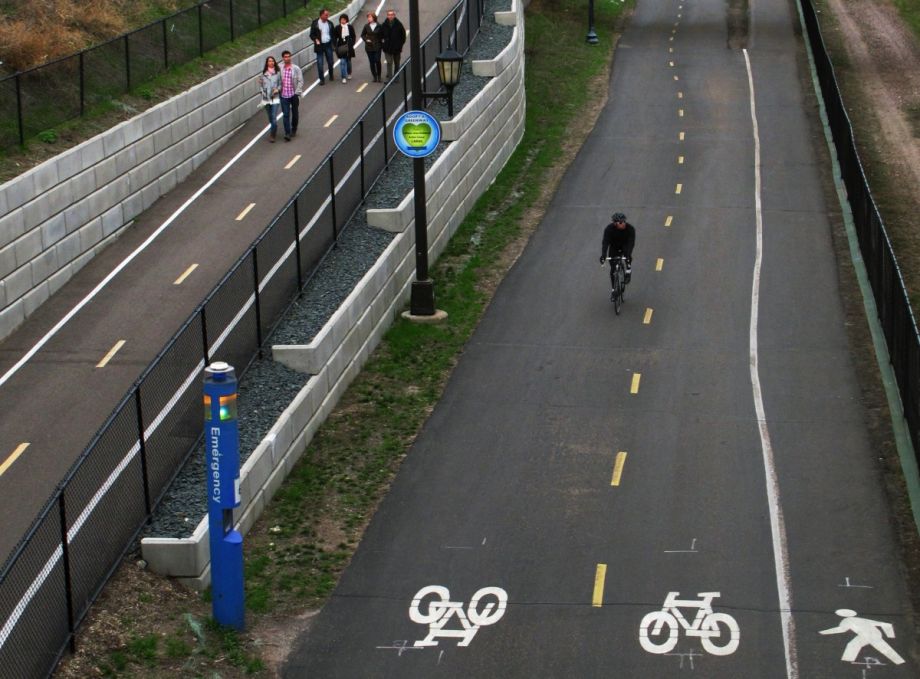 But, in practice the two don’t always mix so well. How often has a bicyclist buzzed past you on the sidewalk without warning, scaring a few years off your life in the process? How many times have you biked down a multi-use trail and had to slam on the brakes every few seconds to avoid joggers, walkers, children and dogs? According to a study published in the new issue of the BMJ Open medical journal, biker and walker interaction is more than a question of convenience and comfort. It’s often a question of safety.

The study — with its amazingly long and specific title, “Severity of urban cycling injuries and the relationship with personal trip, route and crash characteristics: analyses using four severity metrics” — evaluated 690 cyclists who’d crashed while riding in Vancouver and Toronto. They judged the crashes by whether the rider 1) did not continue riding; 2) was transported to the hospital by ambulance; 3) was admitted to the hospital; and 4) fell on the Canadian Triage and Acuity Scale (a 1-5 scale used by Canadian hospitals to prioritize urgency of incoming patients). The researchers also looked at factors such as the routes cyclists chose, the presence of bike-specific infrastructure, topography and motor vehicle speed.

Many of the study’s findings confirm what any cyclist could tell you offhand: Collisions with cars, fast-moving bikes and cars, busy intersections, and steep hills all increase the likelihood of a crash and the negative consequences of those crashes when they happen. The study also came to a far less intuitive conclusion: Riding on sidewalks and off-street trails shared by walkers and bikers increases the risk of a crash, and crashes of that type are more severe than on major streets without bike infrastructure.

The study doesn’t specify why multi-use paths and sidewalks pose a higher risk of severe crash, but Scott Bricker says it’s because of the relative incompatibility of fast-moving bikes and slower walkers. Bricker is executive director of America Walks, a Portland, Oregon-based nonprofit advocating at the federal level for safe walking.

“It really comes down to a velocity equation and those speed differentials,” says Bricker. “If you have a 5-year-old riding on the sidewalk, the chance that they’re going to seriously injure someone walking on the sidewalk is pretty slim because they’re small and going slow. … A bike racer speeding down the sidewalk that really changes the dynamic.”

Bricker says that to some extent, bikes and walkers are analogous to cars and bikes (save for the fact that bikes don’t protect their operator). A fast-moving cyclist hitting a walker is a recipe for serious injury for both parties.

One solution? Separate the users, of course. Bricker says, “Separation really helps improve safety for all users. When you separate cars and bikes with cycle tracks it really improves the safety. We also believe cycle tracks help keep people on bikes off of sidewalks, helping separate people on bikes and people on foot.”

The study in BMJ Open recommends separate infrastructure as well. It says, “[These] results suggest an urgent need to provide bike facilities that separate cyclists from motor vehicle traffic, that minimize slopes and have lower motor vehicle speeds, and that are designed specifically for bicycling rather than for sharing with pedestrians.”

Some bike advocates argue cycle tracks (bike lanes separated from cars by a physical barrier) have additional safety benefits for walkers and reduce overall traffic injuries. They make crossing distances shorter and create controlled turns at intersections that reduce the chances of cars hitting pedestrians in the crosswalk. Also, because cycle tracks reduce road space and have a traffic calming effect, they help reduce car weaving, where a driver swings into an open lane to get around another car that’s yielding to a person crossing the street.

More and more cities are building protected bike lanes. (PeopleForBikes says there are now nearly 200 in the United States.) But no U.S. city has anything close to a complete network that would allow cyclists to ride all over town via protected bike lane. And given a protected bike lane’s $445,000-per-mile price tag, it’s unlikely those networks are coming soon (pennies compared to a four-lane highway’s $4 million to $10 million cost, but still).

Bricker says there are far less expensive ways to increase safety immediately. “No doubt, the cheapest thing a community could do to save lives and make cycling and walking safer, more convenient and more comfortable would be to lower automobile speed.”

Pedestrian safety is an important issue for Bricker and America Walks, but he says in the scheme of things, bikers and walkers mixing is a low priority.

“The actual severity of the problem between walking and biking is statistically relatively small. If you look at the total level of carnage that happens on our nation’s roadways each year … 40,000 people are getting killed [in and by cars] and hundreds of thousands are getting injured.”

“On a sunny, weekend day when the trail is completely congested with people walking their dogs and kids and people of all ages, sizes and abilities, everyone’s speed needs to just come down.”