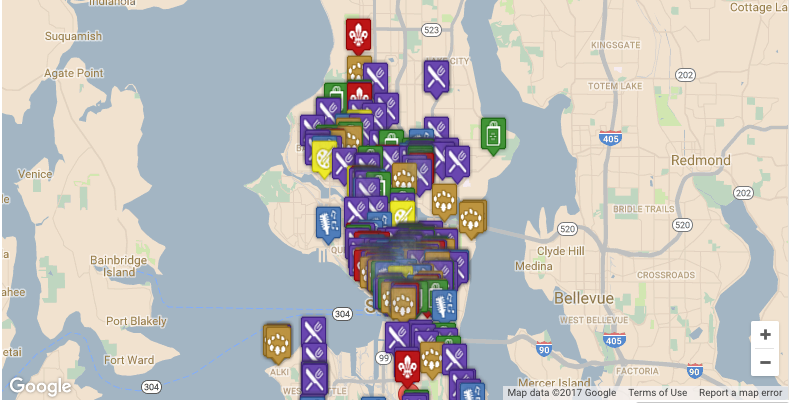 (Credit: Ghosts of Seattle Past)

An old arcade, a restaurant famous for its Nordic fare, a ‘90s hub for black artists, a kite shop — these are only a few of the defunct businesses and community hubs immortalized on the Ghosts of Seattle Past website.

That website is part of a larger project that will be available in book form on April 11. Billed as “an atlas of our memories, a collaborative map of places loved and missed in a rapidly evolving city,” the book is being spearheaded by Jaimee Garbacik, a book editor from the Seattle area, and Josh Powell, a local artist. Like Rebecca Solnit’s “Infinite City,” it uses the atlas form to tell a larger story about place — in this case, how the city’s current and historic boom cycles have interacted with “longer-brewing problems of segregation, queer erasure and colonization,” according to a release.

Garbacik was inspired to begin working on the project when a local video store closed, another release states. Noticing the notes and memorabilia that had collected overnight, she realized that “people didn’t have an outlet to grieve the rapid change and loss” occurring as the city changed.

She decided to create an interactive map online, where people could mark spots they missed and share stories about those places. She also put out a call for submissions from artists and residents to contribute essays, art and memorabilia — and the “Ghosts of Seattle Past” book was born.

Seattle’s many changes — whether they’re called gentrification or development — were the focus of a proposal last year to create a “legacy business” program. The idea was loosely based on a similar program in San Francisco, which is also struggling with whether its changes comprise a boom or a bust. Skeptics of that program claim it’s anti-development, and may place nostalgia in the path of creating necessary services, like housing.

But Garbacik recently said on KOUW that the book is not intended as a political statement against development — but it is about nostalgia.

“Nostalgia gets this really bad wrap in a city that’s so dedicated to progress but the thing about nostalgia is that it helps us remember who we were, what a place was about and why we identified with here and I think it contextualizes what matters about our city to us,” she said, adding that the project was not about “stopping change.”

“I can’t stop gentrification, but I do have a potential solution for the cultural erasure,” she said in a release. “And that’s interviewing and talking and co-creating art together.”