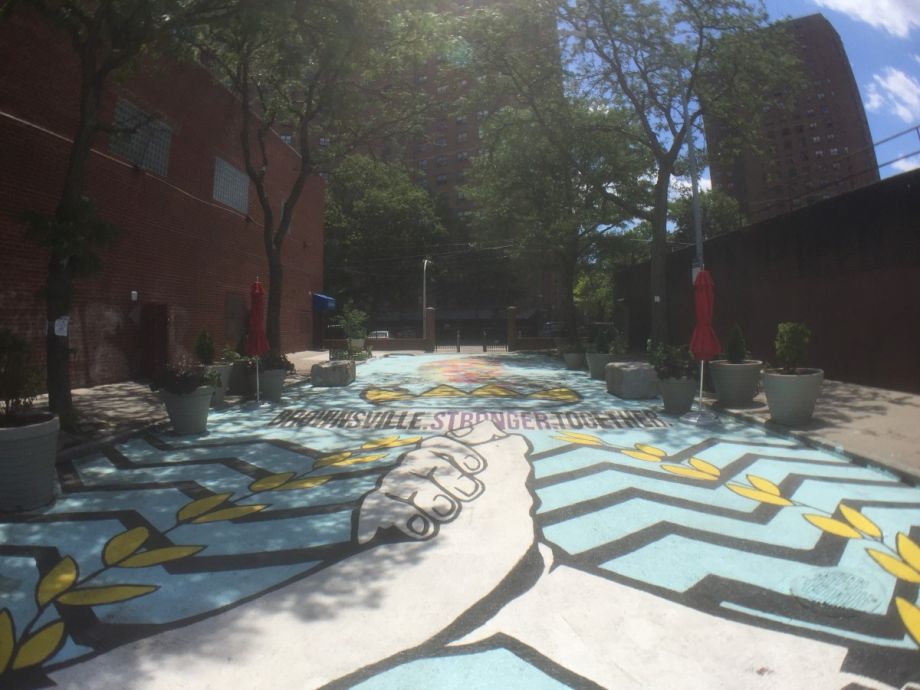 “My mother said I couldn’t be a comedian,” he says, so he found architecture. Got his bachelor’s from SUNY Buffalo, and a master’s from Harvard. “It was mostly me thinking about how to make that profitable, to support the family,” Lewis-Allen explains. “Architecture was a field that kind of held this esteem when I was younger.”

Working in the profession, however, Lewis-Allen soon realized how far removed the architect actually can be from the users of spaces, especially the spaces he cared about most, in his native Brownsville. The Brooklyn neighborhood’s population is 61,000, and it’s 83 percent black; the median income is $30,000. Fourteen public housing communities, officially home to 18,000 residents, cover large parts of Brownsville. Private affordable housing developments also cover large blocks, such as Marcus Garvey Apartments, where Lewis-Allen once lived.

A few years after leaving architecture, his creative streak and even some of his architecture training remain key assets for Lewis-Allen, as director of Made in Brownsville, a creative services agency he founded in 2013 to lower the barriers to STEAM (science, tech, engineering, arts and math) professions for disconnected youth (defined as 16- to 24-year-olds who are not in school and not working) as well as for the secondary school population in the Brownsville area.

“I was always one of two African-Americans in the architecture program,” Lewis-Allen says. “I began to think about what it would look like if there was a pipeline of young people from my neighborhood into STEAM careers.”

Echoing Green recently announced Lewis-Allen as one of its 2016 class of fellows. With support from the fellowship, Lewis-Allen plans to expand the capacity of Made in Brownsville to reach out to more disconnected youth in the community. In the past year, Made in Brownsville engaged 35 youth in its creative services apprenticeship program (and another 62 in an after-school program). In the coming year, Lewis-Allen anticipates having capacity for 90 apprentices.

Meanwhile, there are around 4,600 disconnected youth in the Brownsville area, nearly half the neighborhood’s estimated 10,000 residents between ages 15 and 24.

While many organizations in the neighborhood provide services to many of them, Lewis-Allen sees a critical gap that Made in Brownsville seeks to fill.

“I understand there’s a need for social service provision, but every organization can’t be a social service provider. Someone has to create jobs, meaningful jobs that are sustainable. I think that’s where we come in,” he says. “If we have a participant that has mental health issues, we know where to send them, but right now we’re just worried about getting them money in their pocket.”

That’s why, first of all, the apprenticeship pays a $25 weekly stipend while participants learn from a combination of volunteer mentors and paid teaching artists who instruct on various techniques, software and equipment for up to nine disciplines and counting, including robotics. During the apprenticeship, participants eventually begin to build their portfolios by creating products like photo exhibitions, documentaries, artwork, websites, murals and more. They may even design apparel to sell via Made in Brownsville’s online shop.

Meanwhile, Made in Brownsville also takes on client-commissioned projects, like branding and marketing, print products, public space activation and more. They earned $54,000 in commissions in 2015. For any given project, Lewis-Allen may pull in some of the apprentices, other professionals from the neighborhood on a freelance basis, or apprenticeship program alumni who stay on as paid interns at Made in Brownsville.

Lewis-Allen envisions an agency pay scale based on experience, skill sets and even seniority as longer-tenured interns begin to take on teaching and management roles inside the agency.

In addition to providing revenue to support the organization, the pipeline of client-commissioned projects provides something else that is crucial to Made in Brownsville’s model: flexibility.

One of the many challenges in working with disconnected youth is the tremendous variability in their individual circumstances. Some may only need minimal job-readiness training and portfolio building before heading off to college; some may want to learn more than one discipline, and some may still need to earn a GED even after they’ve learned how to use 3D rendering software.

“The faster we can get them to a job, that’s great,” says Lewis-Allen. “The creative services internship exists not as rigid programming, it exists as a catchment or funnel to get them job-readiness.”

Quardean Lewis-Allen models “what not to wear to a job interview” during a career-readiness event in Brownsville. Made in Brownsville designed and painted the mural, left. (Photo by Oscar Perry Abello)

Lewis-Allen also plans to spend more time establishing partnerships with other businesses and institutions where Made in Brownsville can start sending apprenticeship program alumni when they’re ready.

“Partnerships would be organizations that are able to take on the task of developing our alums. They might not have all the skills they need just yet, but the partner recognizes that and has the space to be very hands on,” Lewis-Allen explains. “A partnership could be a print shop up the block run by someone that we’ve previously trained through our studios,” he adds.

Eventually, Lewis-Allen hopes Made in Brownsville alums will contribute to a new narrative about the neighborhood, replacing headlines about poverty and violence, like this and this and this, with a story they write themselves.

“There are things happening here every day that sculpt the place memory for folks that are here, things that say they have value. Things that might not be as aggregate-able as some of the content that our media outlets want to talk about.” he says. “We have to start to become the storytellers of the place, the historians.”