Civic Tech Pioneers Take Another Swing at the “Which Question?” Question – Next City

Civic Tech Pioneers Take Another Swing at the “Which Question?” Question 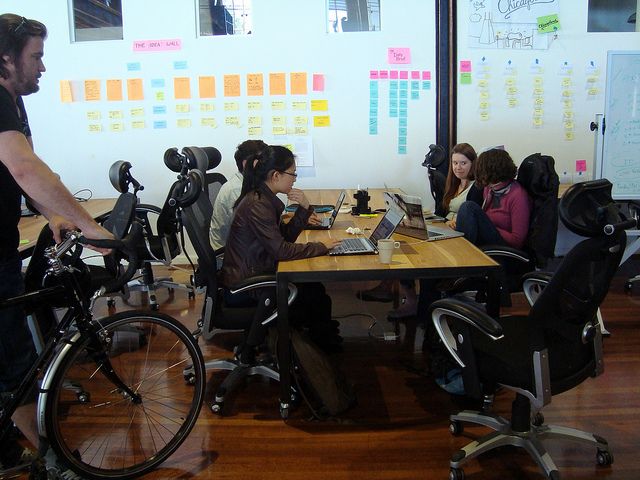 A new contest called Ideation Nation aims to solve one of the nagging limitations of the civic tech movement: The people with the best, smartest answers aren’t often those who know the right questions to ask.

To put it another way, a young, ambitious civic coder might know how to construct an app that makes it possible to track school buses home through storms. But does she have the right mix of life experiences to know that parents might indeed find something like that useful? Again and again, the case has been that no, she often doesn’t. And so the hunt is on for ways to tap the expertise of citizens who might not know how to code, but who know what a city needs.

Ideation Nation, co-run by MindMixer, the Omaha based civic engagement platform, is hardly the first attempt to use digital tools to surface and select juicy civic tech challenges. Witness the latest incarnation of New York City’s Big Apps contest, for example. And in truth, it’s a circumscribed attempted. The prize money, $5,000 to implement the winning idea, packs a limited wallop. There are few of the guidelines that tend to make these brainstorming sessions actually productive.

But it’s the participation of MindMixer’s co-partner, Code for America, that catches the eye. The San Francisco-based non-profit, which many would call ground zero for the civic innovation movement, has quietly been shifting how it thinks about finding good ideas to manifest in code. In a previous Forefront story of mine on that evolution, then-Code executive director Jennifer Pahlka (now on leave as a deputy CTO at the White House) outlined the organization’s starting framework. To quote oneself:

In Code’s first two cycles, Pahlka admits, what the fellows came up with tended to follow a script of limited scope. Step one: “Go find some data that people care about.” Step two: “Work with bureaucrats to explain to them why this data could be made more useful.” Step three: “Integrate it with other data.” Step four: “Create a simple and easy-to-use interface.” And, finally, step five: “Work with constituents to get it out there.”

Now, having outsiders pluck from thin air the problems they’ll set about solving means that government lifers will face up to the challenges that they think the public wants tackled. But there are at least two hiccups with that approach. One, letting available and easily parseable data be the guide means we end up with a plethora of bus apps. And two, you end up with an app that might, if the stars align, work well in one city but has no organic tie to anywhere else.

There are too few coders to go around to make that approach worthwhile. “I’ve spent four years thinking about how you get civic infrastructure reused,” said Abhi Nemani, Code for America’s interim co-executive director, in a recent interview.

Ideation Nation, then, builds on what MindMixer, founded in 2010, has learned over the years. “When we started,” CEO Nick Bowden said, “we let cities do anything they wanted. And we quickly learned that there wasn’t that expertise.”

Translation: Cities didn’t know intuitively how to ask citizens to participate in civic life. Now MindMixer spends much of its time, Bowden said, producing “programmatic content,” as in materials that equip cities to engage the public.

That effort has had some success, according to Bowden. Now the trick is to figure out just how much, when pushed, citizens can contribute when it comes to figuring out the problems most worth solving. “We’re going to test our theory of engagement versus capacity,” Bowden said.

A panel of judges will hand-pick 25 qualifying ideas, with a eye toward scalability. Online participants will determine the ultimate winner. The contest runs through October 31, and ideas already posted to the site include cross-jurisdictional geographic planning apps, reporting software for government grantees, and video capabilities for 911 services.