Breaking Down the Numbers: Who Can Win the Oakland Mayor’s Race – Next City

Breaking Down the Numbers: Who Can Win the Oakland Mayor’s Race 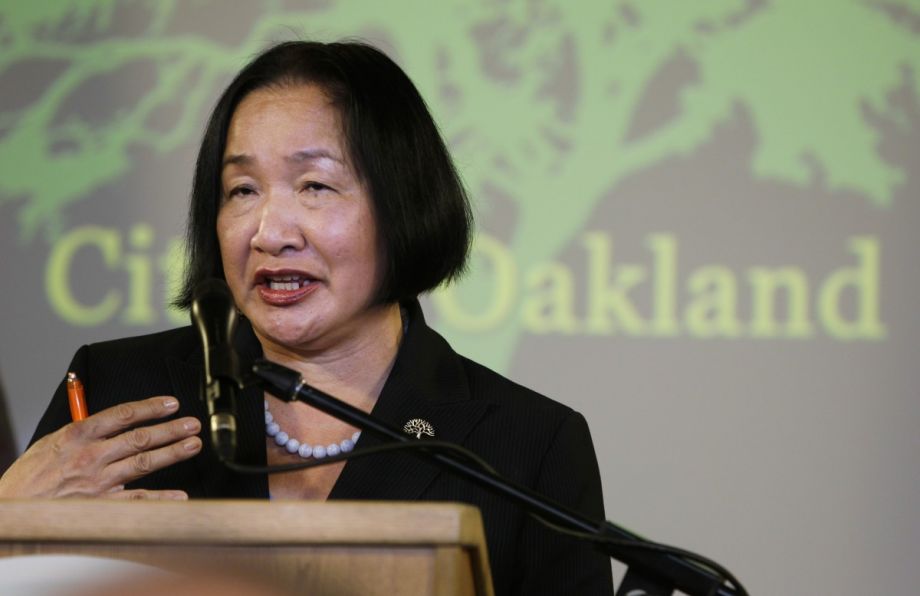 The most recent polls in next month’s race to be mayor of Oakland, California, show nearly 40 percent of voters are still undecided. It’s certainly not for lack of options: There are 14 candidates going up against incumbent Jean Quan, whose approval ratings have been mediocre to dismal as the city has struggled with chronically high crime rates, high turnover in key administrative positions, lingering budget issues, and tensions over rising rents, gentrification, and displacement.

The November 4th ballot is so heavily loaded in part because, instead of the traditional primary system, Oakland has adopted ranked-choice voting (RCV, also known as “instant runoff” voting). Along with their first choice, voters can mark second and third choices on their ballots. If no candidate wins a majority of first-place votes, that triggers a process in which the lowest-ranking candidate is eliminated and the next-ranked choices on that candidate’s ballots are distributed among the remaining candidates. This process continues until a majority winner emerges. If that sounds confusing, this nifty video from Minnesota Public Radio clarifies RCV in pleasingly simple visual terms. (Minneapolis has gone to this system for its mayoral election, which San Francisco also uses.)

RCV’s proponents say that it means less expensive and protracted campaigns, and that it also avoids the problem of splitting the vote of a particular ideological constituency, as happened in the 2000 presidential election, when progressives voting for Ralph Nader siphoned away enough votes from Al Gore to put George W. Bush in office. In RCV, they would have been able to put Nader first and Gore second, leading to a likely Gore victory (and all the different outcomes that would likely have entailed).

Oakland first employed RCV in 2010, and the system benefited Quan then. In a nine-candidate field, veteran Alameda County Democratic pol Don Perata received the plurality of first-place votes in the initial tally. But once the second- and third-place choices from ballots cast for lower-ranking candidates were distributed, Quan — a relative outsider who first got into politics as an education activist — won with a final total of 50.96 percent.

This time, though, she might suffer from an “anybody but Quan” mentality among the city’s disaffected voters. And while some of her opponents are clearly single-issue or fringe candidates, six of them have emerged as real contenders.

“What makes this election so complicated, and why nobody really knows how it’s going to play out, is that there are seven credible candidates,” says Dan Lindheim, who served as Oakland city administrator under Quan’s predecessor, Ron Dellums, and is now a lecturer at the Goldman School of Public Policy at the University of California, Berkeley. “Last time you could argue that there were four credible candidates, and almost all of the first-place votes went to those four, and really to the top three. This time, the problem that Quan has is that if she’s not going to win with first-place votes — and nobody thinks she’s going to get 50 percent of the vote on first-place votes — then, if you’re not going to vote for her as your first choice, then you have more than three credible choices to vote against her. So the question for her is, how does she ever get any second- or third-place votes?”

Quan’s hope, says Lindheim, is that some Oaklanders might vote for a candidate who isn’t likely to win as their first choice out of idealism — say the progressive Siegel — and then choose Quan second. Her tactics, says Lindheim, are relatively simple: “She walks everywhere and she campaigns incredibly hard,” he says. “And she goes to people, and she says, ‘Look, I know you’re not going to vote for me number one. But you have three votes. All I’m asking is that you give me one of those three votes.’”

How that will work for her is unclear. Will the fact of incumbency work for her or against her? “The question then becomes, a mayor comes to your door, and even though you are not voting for that mayor, will you acquiesce to putting her down as number two or number three?” says Lindheim. “The second question is, if you’re the kind of person who will do that, is your first choice going to be someone who’s in the top two? In which case it won’t matter. So that to me is the great mystery of that campaign. I have a bet with her campaign person, that I don’t think enough people are going to do that. But we’ll have to see. I don’t really know.”

For Quan’s strongest opponents, Lindheim says, the thinking is still pretty basic. “If you’re going to be in the top two, your voters never go anywhere,” he says. Still, there are some delicate politics to be negotiated. “If I’m Rebecca [Kaplan], for example, I’m going to presume that I’m in the top two, and I’m going to be very careful about telling anybody not to vote for any of the other candidates other than Quan.” A strong candidate like Kaplan, says Lindheim, won’t want to anger the voters of candidates who are likely to be in the top four, such as Schaaf or Tuman. If she is going to end up in the top two with Quan, she is best off if voters put anyone but Quan in the second and third positions. That’s presuming Quan will be in the top two herself.

Beyond the political maneuvering, Lindheim says he is concerned how the crowded field could affect the number of ballots that are “exhausted” — the ones where none of a voter’s top three choices make it to the final two. “Less than 12 percent of ballots were exhausted in 2010,” he says. “My guess is this time that number is going to be much higher, because it’s quite plausible that somebody might vote for a list of three of the credible candidates, and none of the three would make the top two. That has issues in terms of, how democratic is ranked-choice voting?”

In the end, he says, the outcome of the election may not be of critical importance. For one thing, he says, the improving economy has meant a significant improvement in the city’s position since he was city administrator in the wake of the financial crisis. “They have the luxury that now it’s not as dire a situation,” he says. “You’re not on the verge of cataclysm at this moment, because the real estate market has come back.”

For another thing, says Lindheim, the mayor only has so much power, for good or ill. “People think that there’s a strong mayor form of government in Oakland,” he says. “But the reality is the only real authority the mayor has from a legal point of view is to appoint the city administrator. And five votes on the council trump anything the mayor wants to do. Now, that doesn’t mean the mayor doesn’t have a bully pulpit, the mayor absolutely has a bully pulpit. But the reality is that most of what’s going to go on is going to be determined both by the city administrator and the department directors, and policy that’s made by the council. And the mayor can help influence that, and can help direct that, and can try to lead that. But whether the future of Oakland depends on this election? I think that’s overstating it.”