Is Development Without Displacement Possible in the Bay Area? – Next City

Is Development Without Displacement Possible in the Bay Area? 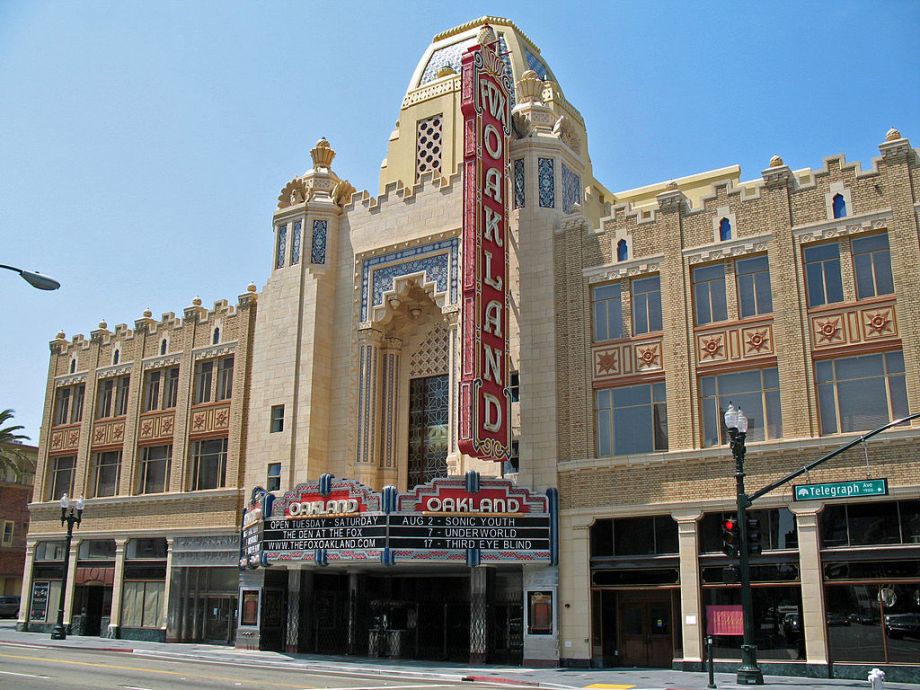 The Fox Theater in Uptown Oakland is one reason the American Planning Association put the neighborhood on its 2014 “Great Places in America” list. (Photo by Sanfranman59)

Since the 1960s, Oakland’s position in the Bay Area has been as the soulful, browner, more radical sibling to San Francisco and San Jose. It has also been historically poorer. But the heat currently emanating from the region’s housing and job markets has coincided with, and contributed to, a renaissance in the East Bay city.

Oakland’s cache is rising rapidly as a tourist destination and a safe, vibrant place to live. But affordability concerns and the erosion of stable, middle-class jobs has led to concerns about displacement of long-term residents struggling to hold on to homes and good jobs.

An early high point of Oakland’s renaissance came a few years ago when the New York Times named the city a top destination in 2012. More recently, Uptown Oakland was designated one of the American Planning Association’s 10 Great Neighborhoods for 2014.

Much of this has to do with redevelopment of the downtown (rebranded as Uptown) as a diverse, vibrant arts and culture district anchored by theater restorations, the mixed-use Uptown Residential Development Project, and the monthly Art Murmur/First Friday gallery walk.

But the shock of rising housing costs has inspired an increased organizing effort around gentrification that’s reminiscent of the “old Oakland,” known for its activist communities. That’s where the Black Panther Party was founded, where one of the strongest Occupy movements took root.

“It’s good that there is a shifting narrative about Oakland,” says Robbie Clark, an organizer with Causa Justa. “But I do think that ones that are always posed about ‘what is Oakland?’ and ‘who is Oakland?’ are detached in a lot of ways from everyday realities for people who have grown up living here or who have been here more than three to five years. We are not shaping that narrative. That narrative is being shaped by the people who are looking to profit off of Oakland.”

“A lot of our organizing work is about assuring that existing residents are top priority for the city,” says Clark. In April, they released a report called “Development Without Displacement” that studies the effects of gentrification on marginalized communities. Their other interventions include the development of a tenant protection ordinance and a proposed anti-speculation/anti-flipper tax.

The lack of economic mobility opportunities also contributes to longer-standing populations choosing to leave the city. This month, civic planning organization SPUR published “Economic Prosperity Strategy,” which provides a regional framework focused on economic mobility and expanding the middle-class. It acknowledges the role that federal and state government can play to solve some of the problems, but it cites local and regional development led by industry leaders, community and nonprofit organizations, and workforce development programs as key.

In the Bay Area, more than 1.1 million workers, over one-third of the region’s workers, earn less than $18 an hour. According to the report, “lower-wage workers face significant barriers to higher-wage employment. However, focused attention on improving basic skills, building partnerships to provide employer-based training opportunities and helping workers navigate career paths can make these barriers surmountable.”

The report singles out the Stride Center in Oakland as having success prepping low-wage workers for working in the information and communication technology fields.

“I think that while our target really doesn’t have anything to do with gentrification,” says Barrie Hathaway, executive director of the Stride Center, “the work that we do does, because people are moving into Oakland. They are getting jobs here. If we can create workers who have the skills to get those better jobs, then they’re not going to leave. I think that one of the things we should always be trying to do when we see a city that’s going well and is growing jobs is work very hard to develop the skills and the talent of the local workforce.”

Clark points out that although workforce development can be used as a corrective, it has its limits. “A lot of times when you talk about investing in communities, people like to talk about expanding the middle-class,” says Clark. “We are actually for better jobs in Oakland. We are also really supportive of the minimum wage fights that are happening. But workforce development as ‘the answer’ is a longer-term strategy. It takes time to build those jobs and acknowledge that there’s been this extreme, historic disinvestment [from people having access] to any of those jobs.

“What does it mean to have workforce development for jobs in 10 years? When you look at what’s happened to the working class in Oakland over the past 10 years, you’ll see almost a quarter of that population has left.”

Hathaway believes that the Stride Center’s programs are already seeing some progress among graduates, who have seen a 30 percent increase in wages, on average. While the average graduate still only makes $16 an hour, he sees even the most basic entry-level jobs as crucial stepping stones to better jobs in the future.

He also cites the projection that there will be 1.4 million computer-related jobs in 2020 and a one million worker gap in who will be qualified to fill these positions.