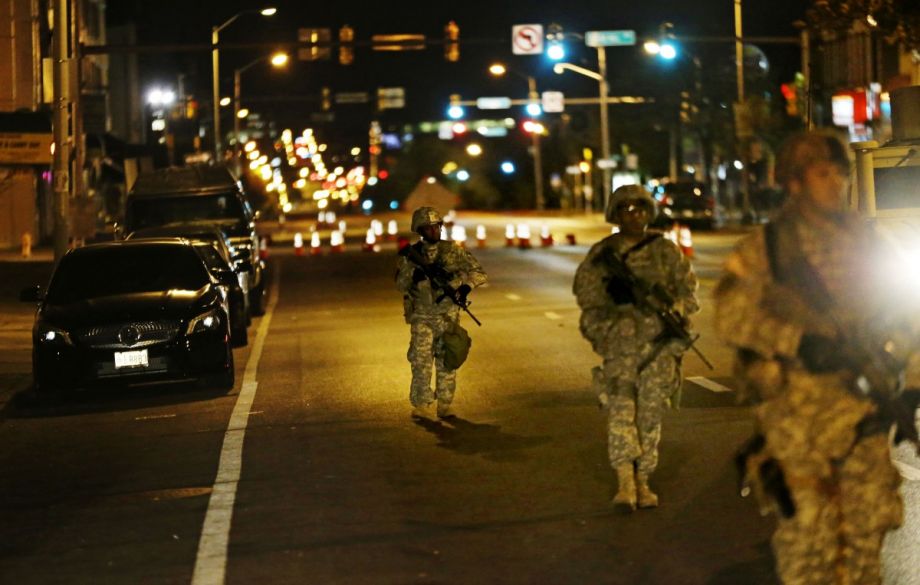 Members of the National Guard walk along North Avenue in Baltimore, near where riots occurred following the funeral for Freddie Gray, who died in police custody. (AP Photo/David Goldman)

EDITOR’S NOTE: This Next City story from 2015 used the word “riots” to describe both the 1960s uprisings in Detroit, Watts and elsewhere, as well as the 2015 protests in Baltimore that followed Freddie Gray’s death in police custody, which the medical examiner ruled a homicide. The language we use when describing these forms of protest has evolved since then, and were this article to be published today, we would refer to these events as rebellions, protests or uprisings.

The Maryland National Guard is now patrolling the streets of Baltimore. They arrived Tuesday; the Baltimore Sun counted 1,700 soldiers, plus 400 state troopers and other officers — marshaled after protests over the death of Freddie Gray in police custody led to injuries and fires Monday night. This deployment, given the scale of the unrest in Baltimore, is unsurprising. The Missouri National Guard was too deployed in Ferguson, amid massive protests there over the police shooting of Michael Brown.

In both cases, guardsmen’s arrivals made some observers wary. Why would the National Guard be cause for anxiety? Because there are various instances where deployments ended disastrously, especially in cities and especially with black protesters.

To be fair, participants in the second march from Selma (Turnaround Tuesday) may have fond memories of the guardsmen who watched over them. Still, dark memories of the Kent State massacre, Rodney King riots and multiple race riots throughout the ’60s from Detroit to Watts persist.

Perhaps no city has as somber a history with the National Guard as Wilmington, Delaware. The Delaware National Guard’s occupation of the city lasted more than nine months, the longest military occupation of a U.S. city since the Civil War. As Next City contributors have covered, even with a myriad of Fortune 500 companies in town and cush placement along the chain of cities that make up the Northeast Corridor, Wilmington lacks a vibrant urban core. Many historians point to the 1968-1969 occupation as a key factor in that.

In the pre-war era, Wilmington was no ghost town. Recollections from that time describe the stuff that urbanists gush over — diverse storefronts, tightly knit communities and plenty of foot traffic. “It was a little Europe,” reminisced one jewelry repairmen, speaking about his neighborhood to the New York Times in 1999. ‘‘I would walk up Market Street on Fridays to collect the work from the jewelry shops for the next week. It was shoulder-to-shoulder people.”

But the post-war urban renewal strategies, not to mention the state and federal policies that favored suburban growth, that troubled cities across America weren’t kind to Wilmington either. Highway planning, newly constructed housing projects and the desegregation of city schools all drove white flight. In Corporate Capital: Wilmington in the Twentieth Century, Carol E. Hoffecker notes that in the early ’60s, the city’s population went under 100,000 “for the first time since 1910,” yet the county population rose by 40 percent, to 307,000 residents. General Motors opened a plant in town and Du Pont saw its sales swell, Hoffecker wrote; both companies began hiring more from the suburbs. And so began Wilmington’s path to becoming a place where business could boom in the daytime but streets could appear empty by the early evening. Tensions simmered in town, often along racial lines.

Former Mayor James Baker, who was a social worker at the time, called Martin Luther King’s assassination as “the straw that broke the camel’s back,” according to a 2008 (Wilmington) News-Journal report. A memorial was held on April 8th, four days after MLK’s shooting. There, then-high school student and now former City Councilman Jea Street told the News-Journal, “Somebody threw a brick through a window and all hell broke loose.”

Twenty vacant buildings were destroyed and the cost of property damages neared $163,000, wrote Hoffecker. Some 400 people were arrested. Considering the fires and fatalities recorded in other American cities after MLK’s death, Wilmington’s riots were relatively small. But they were enough for then-Governor Charles Terry, who deployed the Delaware National Guard and kept them in Wilmington for the remainder of his term, despite then-Mayor John Babiarz’s pleas for him to reconsider. Calvin Trillin, in a feature for the New Yorker wrote, “[T]he Governor had revealed that a couple of the most prominent industrialists in town had made the trip to Dover to try to persuade him to remove the patrols (he told them that secret intelligence reports had warned of trouble brewing).”

Trillin detailed M-1-toting soldiers doing regular police work that December “past burned-out or boarded-up storefronts,” long after riots had quieted. “As you ride through, it doesn’t seem like a feeling of resentment. It feels like pure hate,” a state trooper remarked to the writer.

The occupation accelerated the suburbanization of both the middle class and commerce. William Boyer, co-author of Pivotal Policies in Delaware: From Desegregation to Deregulation, told me in an interview that the dominoes fell this way: The national media “ridiculed” the occupation for its heavy-handedness and awful impacts; business leaders feeling the weight of the terrible press voiced concerns and went ignored, as did horrified black community organizers; widespread dismay led to an election shake-up that unseated both mayor and governor. “Simply put, the Guard’s continuing presence was an unprecedented jolt to many Delawareans, both white and black,” he said.

Today, Wilmington has a population of 71,500. Almost a quarter of residents live below the poverty line. For signs of the occupation’s effects, Boyer pointed to persistent issues of poverty and crime. Workers that commute in from outside the city might fear its murder rate, he explained. Wilmington saw 28 homicides last year, an alarming number for its size. “There’s been talk of [corporations] migrating to the suburbs,” he added.

More than 45 years later, Wilmington is still working its way back. Boyer noted that its decline wasn’t just because of the occupation. “The urban problems we have are shared throughout the United States.” he said. “Wilmington in some respects is a microcosm of the urban centers throughout the nation. But it’s not as bad as it was in Baltimore last night.”