Police Chiefs Are on the Hook for Building Trust. Will They Sign Up? – Next City

Police Chiefs Are on the Hook for Building Trust. Will They Sign Up? 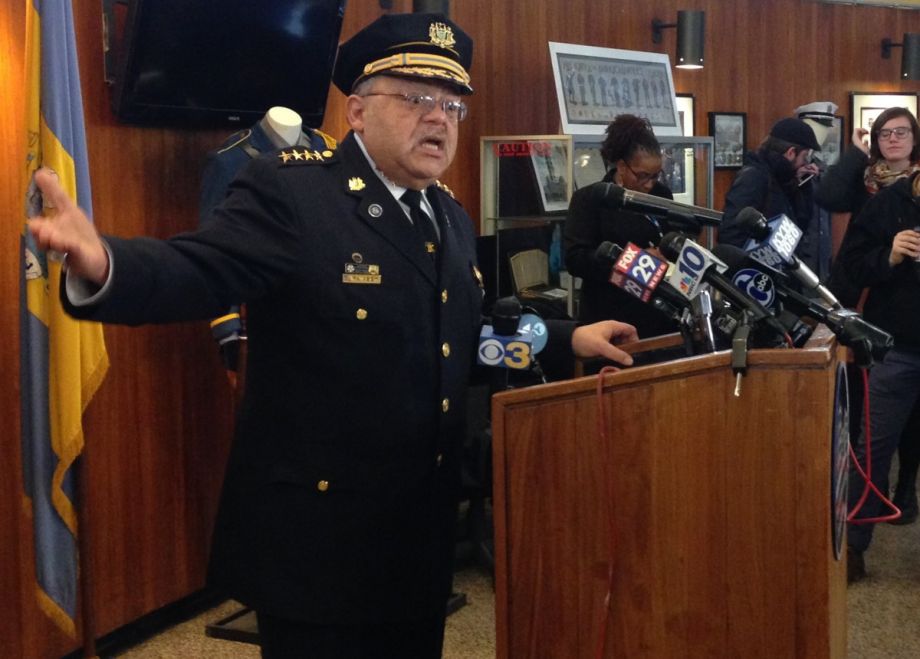 On the very morning that members of President Obama’s Task Force on 21st Century Policing were walking their recommendations to the White House to hand deliver them to the President, the Department of Justice was putting the finishing touches on a report of its own. The DOJ’s paperwork detailed a pervasive culture of racism and bias in Ferguson, Missouri, where the fatal police shooting of Michael Brown last August sparked nationwide protests. According to the review, Ferguson police routinely violated the constitutional rights of the city’s majority black population through targeted profiling and the use of unjustifiable force.

At the same moment, 700 miles away in Chicago, hundreds of protesters were gathering outside a nondescript brick building in the city’s North Lawndale section that The Guardian newspaper recently identified as the location of a CIA-style “black site” — used for years by police to interrogate mostly minority suspects off the grid. A three-page “fact sheet” issued by the Chicago Police Department denying the allegations of abuse at the Homan Square facility has done little to quell mounting community outrage.

Against that backdrop, the Obama-appointed task force’s interim report offered 59 recommendations for addressing the erosion of public trust in law enforcement.

An oft-repeated mantra from reformers, echoed throughout the report, is that we must begin the work of turning police from “warriors” into “guardians.” This is a noble goal in spirit, but it is likely to prove arduous in practice. The difficulty of the task at hand is made all the more stark by the news in Ferguson and Chicago.

Over the past three months the panel has hosted seven public hearings and a number of less formal “listening sessions” to elicit the input of a wide range of experts and stakeholders on the subject of policing reform. The result is a thoughtful and engaging study on the yawning credibility gap that separates police in many communities from the people they are sworn to serve, and a sensible roadmap toward repairing the damage.

Responding to a question on Homan Square during a press conference this week, task force co-chair Charles Ramsey — who spent three decades in the Chicago Police Department, rising to the rank of deputy superintendent, and is now police commissioner of Philadelphia — questioned the veracity of the accusations against the CPD. Ramsey acknowledged that improving public perceptions of law enforcement, even if misguided, is a critical component of reform, but added that police are often at a loss for how to go about that when the community narrative doesn’t match the department’s own version of events.

“If you’ve got something that is not based on fact, it becomes very, very difficult,” he said. “I don’t know how you deal with some of that but I think that where things like that catch fire is when there is this general feeling of mistrust about policing that exists right now … so even the most ridiculous statements somehow have this level of credibility. That’s the barrier we need to break down.”

That barrier is a formidable one. Mariame Kaba, a long-time prisoner justice activist and founding director of Chicago-based Project NIA, echoes the frustration of marginalized communities from Los Angeles to New York when she says she has lost all faith in police to respond appropriately to community concerns.

“The idea that this is a matter of mistrust that will be fixed by a couple of town halls with the community, that’s ridiculous,” she said. “It’s important to contextualize stories like this in terms of the way the people, particularly black people, have been treated by police. These are not exceptional events but the result of a long-term legacy of police abuse.”

If police departments want to demonstrate they are committed to reform, she said, the best place to start is by removing officers who have a record of abuse and misconduct.

And therein lies the real conundrum of improving community trust in police: Police blame community accusations of abuse and misconduct on widespread mistrust, while communities view the mistrust as a legitimate response to years of unaddressed police misconduct. It’s a chicken-and-egg syndrome that all but ensures the two sides will continue butting heads.

Ramsey’s co-chair on the policing task force, George Mason University criminologist Laurie Robinson, thinks that on some level, breaking that cycle will require police officials to be more proactive, and less reactionary, in responding to community concerns.

“When serious incidents occur including those involving alleged misconduct, it’s important [for police leadership] to communicate quickly, openly and without reacting defensively,” she said, in a phone interview, “but that has to occur against a backdrop of establishing real relationships with community leaders. These relationships need to be built up before these events occur, because trying to do that neutrally in the midst of a crisis is a challenge.”

Robinson, who has held various roles at the DOJ and has been advising the federal government on criminal justice policy since the 1990s, is optimistic that police are receptive to change, but admits the pace of reform could be complicated by fiscal realities and the decentralized nature of America’s police forces.

Indeed, the task force offers little guidance on exactly how to incentivize roughly 18,000 culturally distinct police departments to adopt their recommendations, or how to finance the wholesale shift in training, oversight and accountability needed to drive the reforms.

A number of the recommendations would require financial investments — in technology, training and data analysis — that will strain departments that are already facing belt tightening. Ramsey’s panel calls on Congress to help fund a handful of programs, including crisis intervention training for officers. But as Ted Gest pointed out recently in an excellent article at the Crime Report, the primary federal vehicle for funding police reform efforts — the Department of Justice’s Office of Community Oriented Policing Services (COPS) — has struggled to fend off budgetary cuts in recent years.

Congress currently has no direct power to regulate state and local police agencies except through the power of the purse. Experts say that while there are various funding sources Congress could make conditional on reforms, it’s not clear the legislative appetite is there.

Robinson says the federal government can play an important leadership role with minimal financial commitment by serving as a clearinghouse for police best practices and offering technical assistance. But at its core, the nuts and bolts of policing reform will take place at the local level, and will remain a largely voluntary effort.

In his remarks at the report’s unveiling, President Obama acknowledged as much, saying that a large portion of the work ahead hinges on local police chiefs and elected officials “recognizing that the moment is now for us to make these changes.”

That has led some legal observers to criticize the task force report for not going far enough by failing to take a stronger line on civilian oversight or tying federal funding to a requirement that police undergo racial bias training, among other things.

Walter Katz, a police oversight attorney and former Los Angeles County alternate public defender, says that when the dust settles following the latest police scandal, it’s too easy for police departments, politicians, the press and even protesters to fall back into the status quo. And he worries that new training measures alone won’t be enough to facilitate the cultural shift needed to address the racial dynamics that inform the way police relate to different communities, and vice versa.

“The battle for comprehensive reform in terms of greater transparency, robust investigations, accountability and elimination of bias in policing will take place on multiple fronts — national, state and local,” he said. “That will take political will, and some locales show far more interest in doing so than others. Is there a political motivation for reform when study after study shows that many white Americans have such different opinions about policing in America than racial minorities express?”

The President’s Task Force on 21st Century Policing succeeded in asking some important people some important questions about how to bridge the divide between communities and police; and in the process it set a high bar for agencies willing to do the hard work. But only time will tell if it remains an academic exercise, or effectuates lasting change at street level where it counts.