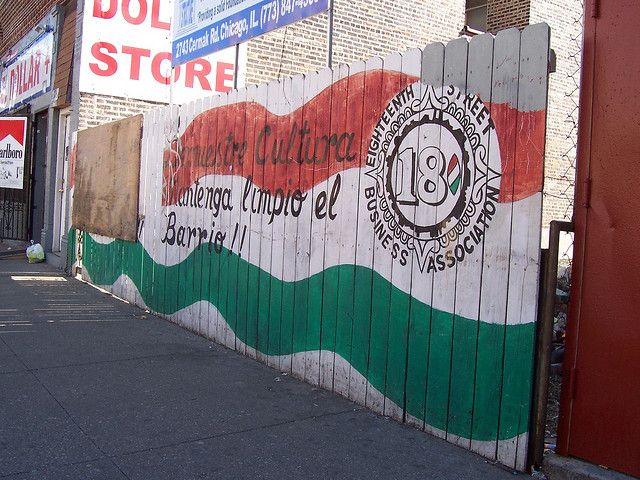 A sign reads “Keep Our Neighborhood Clean” on 18th Street in Chicago, a city trying to lure immigrants for economic growth. Credit: Paco Seoane on Flickr

Last week, the Washington Post ran an article describing Baltimore’s efforts to make itself an attractive destination to immigrants. For Charm City Mayor Stephanie Rawlings-Blake, the prospect of an influx of new residents likely to start families in neighborhoods struggling to rebound after decades of population loss is a hopeful one, and worthy of policies designed to encourage chain migration and long-term settlement. Most notable among Rawlings-Blake’s achievements on this front is a new law, signed in March, prohibiting city police and social workers from requesting immigration status.

Baltimore’s courtship of immigrants is particularly striking given the range of policy dispositions across U.S. cities and states. The Post cites numerous examples of the varied stances cities have taken with regard to their immigrant populations, from policies in Detroit aimed at helping newcomers learn English and start small business, to immigration status check procedures in Prince William County, Va. that have driven away many Latino residents.

An influx of immigrants could have any number of political or economic consequences. (Check out a recent post of mine for a discussion on the effect of a growing Latino voting bloc and electoral politics in Compton, Calif.) But other questions arise, such as how will cities like Baltimore and Chicago — where Mayor and erstwhile White House Chief of Staff Rahm Emanuel recently put forth measures similar to those of Rawlings-Blake — address shifting demographics in allocating resources to schools, housing and health care?

Other jurisdictions are creating institutional support to handle larger numbers of immigrants. New York state is in the process of establishing an Office for New Americans, which, according to the Wall Street Journal, would provide services like naturalization assistance and civics education at neighborhood-based “opportunity centers.” Other cities are struggling to keep up with all the new arrivals. Sarah Kate Kramer’s May Forefront article chronicles the growing pains in East Haven, Conn. in the face of a burgeoning Latino population, and how neighboring New Haven has adopted measures, such as creating resident ID cards, to more peaceably absorb immigrants.

Baltimore is thinking creatively in other ways. The city offers extensive language services to non-English-speaking residents when they interact with municipal services, Spanish-language nutrition and exercise classes, and Spanish-language storytelling sessions at local libraries.

It may be that Rawlings-Blake’s move toward including immigrants more fully into Baltimore’s civic life is timely. It comes at a moment when immigrants are favoring smaller municipalities over larger ones anyway.

A 2010 study by USC’s Lusk Center for Real Estate indicates that immigrant populations are increasingly drawn to mid-size cities — like Nashville or Detroit — because of skyrocketing living costs in the immigrant gateway cities of yore: New York, Los Angeles and Chicago. The study showed that these smaller metro areas exhibited an average of 27-percent increase in their immigrant populations between 2000 and 2005.