What Schools Can Do About Child Poverty – Next City

What Schools Can Do About Child Poverty 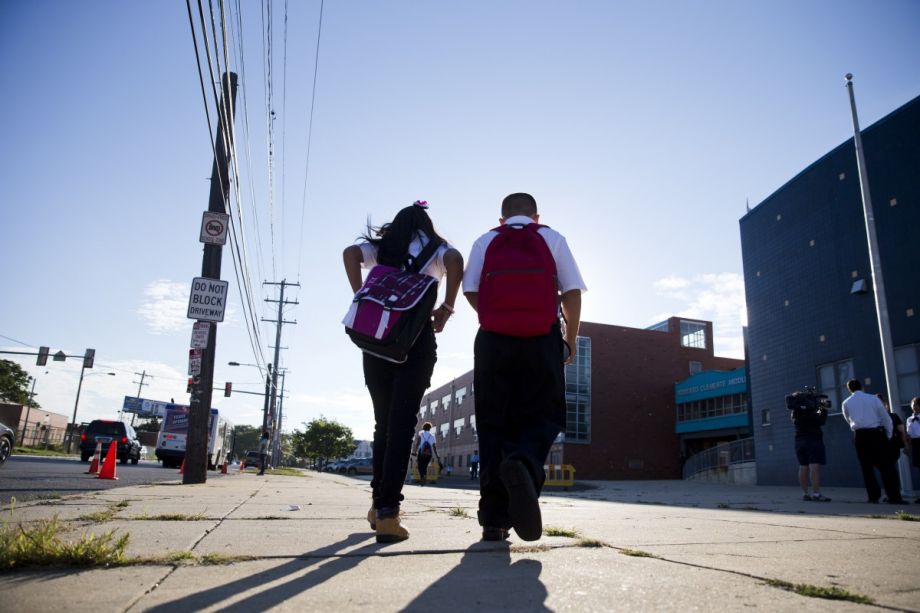 Evidence continues to stack up showing that black communities have struggled more than other groups to recover from the Great Recession. A Pew Research Center report released this week shows that while child poverty rates have decreased for most demographic groups since 2010, the number of black children living in poverty has held steady.

For the first time since the U.S. Census began collecting information on child poverty, the number of black children living in a household with an annual income below $23,624 (4.2 million) is more than the total number of white children living in similar conditions (4.1 million).

Here are some stories from the week about the role schools can play in the lives of kids who are growing up in low-income settings.

Philly College Drops the SAT Requirement, Enrollment Up
Last year, Temple University became the first public research university in the Northeast to drop the application requirement of submitting a SAT or ACT score. As an alternative, students could complete four essay questions. This has been seen as a way to offer minority and low-income students a stronger opportunity to compete, since the test has been criticized for being more predictive of family income than of college readiness.

The School District of Philadelphia has infamously struggled with budget cuts and school closures in the last couple of years. For local minority and low-income students who have graduated with high GPAs and at the top of their classes, waiving the standardized test might be their best bet at becoming accepted to college, still regarded as the Great Equalizer.

As a result of the change, nearly a quarter of Temple’s 30,000-plus applicants — a school record — did not submit standardized test scores. African-American enrollees increased 22 percent, while Latino enrollees went up 26 percent.

Could Urban Schools Educate Better Than Suburban Ones?
A new web tool from conservative think tank Manhattan Institute creates a grading system for America’s schools that attempts to adjust for poverty’s impact on student learning.

“Among students attending the same school, those from families below the poverty line score 8-10 percentile points below their classmates on standardized exams — a performance gap that is present even on the first day of kindergarten,” explains the SchoolGrades.org methodology. “As a result, finding the most effective schools — not just the schools with the best test scores — requires accounting for the economic backgrounds of their students.”

As a result, Ohio cities like Akron and Kent are ranked as being higher performers than schools in affluent suburbs. “Maybe this does cause a little discomfort in some of these [more affluent] areas. But if this does end up being a wake-up call, then I feel from our perspective, we have done our job,” one of the creators of the site told the Akron Beacon Journal.

The Laura and John Arnold Foundation and other pro-school choice groups are sponsors of the site, but the rankings show that charter schools perform no better or worse than public schools in more than two-thirds of states.

Summer Break Means Weight Gain and Less Exercise for Kids
A study by researchers at Columbia University’s Mailman School of Public Health has found that regardless of family income, school children and teens eat fewer vegetables, consume more sugar and watch more television during summer break than they do when school’s in.

“Although obesity-promoting behaviors are generally more common during the summer break, the differences in obesity behaviors between income groups were not exacerbated during the summer break,” says one of the researchers. Even so, she added that, “The school environment remains essential for shaping healthy eating and active living behaviors, and schools can play a leadership role in fostering a healthy transition from the school year to summer breaks.” (“How One Organization Is Fighting Food Insecurity, One Free Breakfast at a Time” delves deeper into this topic.)

This point is key when taking into account the fact that low-income students now make up a majority in the nation’s public schools. Additionally, the results of another study from last December, which found that fruit and vegetables provided to low-income students at schools, provides a critical nutrition boost for them.