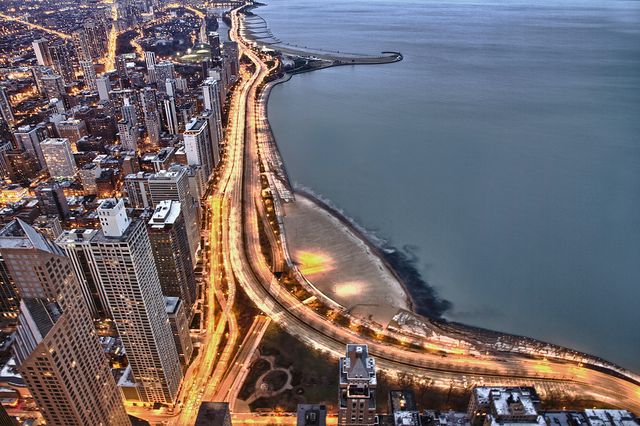 Wednesday marks the 43rd anniversary of Aliotta-Haynes-Jeremiah’s hit recording of “Lake Shore Drive,” a zippy, toe-tapping song about Chicago’s love affair with the eponymous roadway. The anthem’s honky-tonk piano serves as a soothing prelude to the din expected tonight, as Chicago residents gather with state and city transportation officials for the first of three consecutive meetings on the future of seven miles — from Grand Avenue to Broadway — of the 16-mile freeway running along Lake Michigan.

Among the top goals of the planning process, named Redefine the Drive, are finding a design solution that could unknot the head-banging rush hour congestion on the route and decrease the number of accidents that now average 1,100 annually along the road’s northern stretch. In the end, the Illinois Department of Transportation’s (IDOT) will have the final say on all input for the planned revision. IDOT, which is working with the Chicago Department of Transportation (CDOT) on the process, will hold public summits throughout 2017. The hope is that the design plan will be decided by 2016 and the seven-mile stretch rebuilt by 2018.

With civic pride in LSD, as the road known locally, running as fierce as this city’s passion for its sports teams, the public planning process likely to get raucous. It’s not hard to see why. To the east of LSD are Lake Michigan, a changing sky and the dense green of parkland. To the west, more green and a breathtaking view of skyscrapers. The drive winds past museums and fountains. It glides over the Chicago River, past a Ferris wheel, lagoons and a zoo, until fading into the street grid at both its north and south ends. It is one of those rare, gorgeous roads that ease even the most vexing commute.

In short, there is a lot to be lost — or gained — in any changes to this well-trafficked thruway. Local civic leaders fear that IDOT, which owns the road, wants to modernize LSD in ways that will turn it into something more highway and less idyllic. They fear that IDOT will straighten the drive to encourage safety and speed at the cost of increasing the overall number of cars on the route. While safety is obviously a public benefit, they worry that public access to the lakefront could be lost in the trade-off.

“Lake Shore Drive is improperly balanced toward drivers,” says Tim Jeffries, director of planning and policy for Friends of the Parks, a Chicago-based advocacy group. “We want to bring it back in balance for the neighborhoods along the drive and for bikers, walkers and people using the parks.”

With fewer young people driving and a heightened interest in bike and public transportation, IDOT needs a new “bold vision” for the road, says Lee Crandell, director of campaigns for the Active Transportation Alliance, another local advocacy non-profit.

The state, for its part, denies that its goals are in conflict with those of Jeffries and Crandall.

“Speeding up a road isn’t the goal of engineers,” says John Baczek, project and environmental studies section chief for the state agency. “Safety is always number one. What we will ultimately be responsible for is both that the road is safe and that the changes are cost effective. The process of getting there will be open and transparent and inclusive to where we’ll find a balance.”

No one disagrees that the aging road needs repairs. It’s been at least eight decades since the drive underwent its last makeover, and the years haven’t been easy — an estimated 150,000 people drive the designated stretch each day, 70,000 travel it by bus, while another 25,000 either bike or walk its lakeside trail. Adding to the abuse, the lake on occasion heaves huge waves across its many lanes. Then there’s the issue of lake effect-snow, dramatically felt in the winter of 2011 when 15 feet of snow fell on the drive, burying cars and buses.

Luann Hamilton, CDOT’s deputy commissioner, says the city department will study blending or removing interchanges and possibly softening the drive’s sharp curves. “We’ll be looking at the bridges and tunnels leading to the lake front,” she says. “The old tunnels are narrow, they’re not designed for bikes and they smell of urine. A redesign of the lakefront trail will also be looked at as it slopes at dangerous angles in some areas, making it difficult for bikers and runners when the waves are high and wash over.”

Chicago is hardly the only city contemplating changes in a freeway or highway. San Francisco is mulling what should replace Interstate 280. The Texas legislature is pondering whether to tear down Interstate 345. As cities burgeon and outlying areas decrease in population, what to do with the super roads designed for an era wherein suburban commuters were prioritized above the needs of urban centers?

John Norquist, former Milwaukee mayor and president and CEO of the Chicago-based Congress for the New Urbanism, likens the trend to America falling out of love with the shopping mall. These suburban centers of commerce ran their course and popularity. So, too, may highways.

“Highways ended up cutting people off from neighborhoods,” Norquist says. “And for several years there’s been changes made to Lake Shore Drive that weren’t always in favor of people using the lakefront. That’s what everyone is setting out to do, to cut back on the traffic and make it safe for people who live in the neighborhoods along the drive to use the parks and lake trail.”

Even before the planning process officially kicks off, environmental and transportation advocates are lining up to move their own vision forward. Upon hearing that IDOT, which owns and oversees Lake Shore Drive, was soon to begin the public meetings, a mix of 15 neighborhood activist groups, non-profits and agencies united to make sure the reconstruction creates a road that will stay relevant 100 years from now. The Active Transit Alliance, for example, has made public its vision in “Our Lake Front: A Civic Platform for the Reconstruction of Lake Shore Drive.”

Platform proposals include dropping the maximum speed limit from 45 miles per hour to 35 miles per hour and adding express bus-only lanes. It suggests more green space, a new lakefront trail that would separate cyclists from pedestrians, and adding boardwalks along the many beaches.

If due consideration is given to returning Lake Shore Drive to its original scheme as a boulevard, it could become, Norquist waxes, “ a real street where everyone enjoys a serene pace of life. It could be an Ipanema.”

Correction: An earlier version of this story misspelled the name of the director of planning and policy for Friends of the Parks. It’s Tim Jeffries, not Jim Jefferies. The latter name belongs to an Australian comedian.