Chicago’s Painting a World Hub for Public Art – Next City 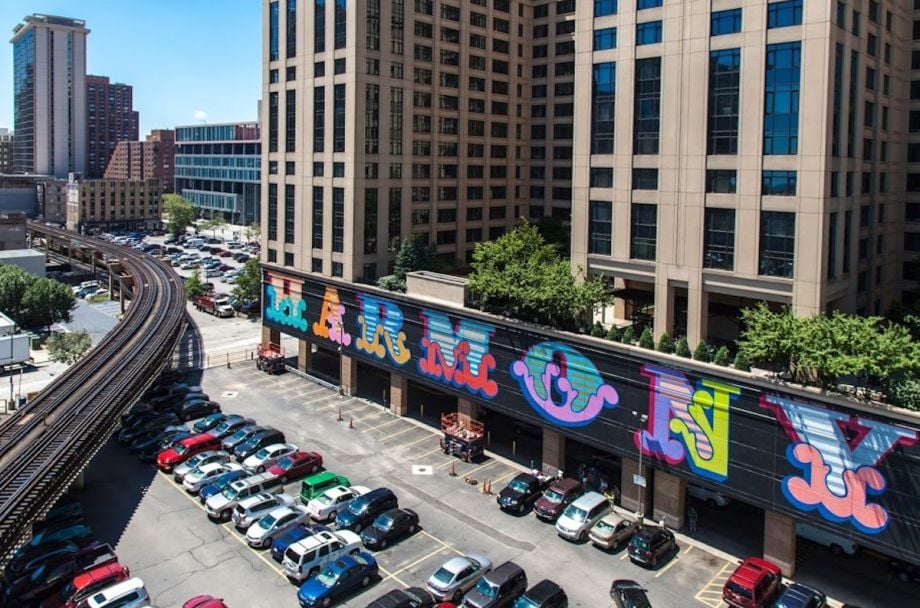 A mural by Ben Eine, called “Harmony,” in progress over the summer in Chicago (Photo by Philip Dembinski, Columbia College Chicago)

Along Chicago’s Wabash Avenue, the howl and clatter of the elevated line drowns out the most basic conversation. With its rows of parking lots, old brick buildings and cheap eats, the corridor, which is sandwiched between vibrant Michigan Avenue and historic State Street, seems adverse to sunlight. Massive steel girders of the “L” cast long shadows. Those negatives, however, are exactly why Mark Kelly believes Wabash Avenue is on the cusp of world fame as a hub for public art.

Where some saw drab, bare walls rising up the exterior of buildings, 11 and 12 stories tall, Kelly saw blank canvasses awaiting a mural artist.

“These are the greatest urban walls you will find in any city,” Kelly, who’s vice president for student success at Columbia College Chicago, says. “They breathe, meaning they are visible, and when the artists see them they are in disbelief.”

Kelly is one of the forces behind WAC, short for the Wabash Arts Corridor,, which, in two short years, has amassed more than a dozen outdoor building murals painted by local and international artists such as Never 2501, Hebru Brantley, Jacob Watts, Shepard Fairey and Banksy collaborator Ben Eine. Tatyana Fazlalizadeh recently completed work on one of the walls, adding to her “Stop Telling Women to Smile” project that addresses gender-based street harassment. Two additional murals will go up in time for the WAC Crawl on October 23rd: one by Brooklyn visual art duo ASVP, and another by Chicago’s Don’t Fret. Don’t Fret is a Columbia College Chicago alum and the school commissioned the work.

When complete, Kelly anticipates that the arts thoroughfare will be an estimated eight blocks long and house 100 murals, making it not only a tourist destination, but an urban campus for the 30,000 students attending nearby colleges and universities, such as Roosevelt and DePaul and the School of the Art Institute of Chicago.

Artists usually do the murals free of cost, some to promote their work for sale in nearby galleries. Paint companies donate materials. Before a building can be painted, owners sign off on and agree to not paint over them for at least six months. But this is no pop-up art project; WAC officials anticipate that the murals, which tend to better with age, will be up for at least a decade.

Tamar Mizrahi Stone, a partner in the Goddess & the Baker coffee shop with massive windows giving a panoramic view of the L and the streetscape of Wabash, says the avenue is coming back to life. Michael Edwards, president and CEO of the Chicago Loop Alliance, says that although the corridor is in its early stages, restaurants, hotels and newly planned apartment buildings are already linking their offerings to the blossoming Wabash.

The ongoing revitalization inspired a group of designers this year to start a crowdfunding campaign to install tens of thousands of colorful LED lights beneath the L tracks. They quickly raised more than expected and plan to start project testing soon, with cooperation from Chicago Department of Transportation and the Chicago Transit Authority. They’ll check whether the lights will work amid weather changes and the vibration of the trains. If all goes to plan, $3 million to $5 million in private donations will pay for a permanent installation to be completed in less than two years.

When it comes to fostering ambitious public art projects, Jack Newell, of the Wabash Lights project, says that cities should honor grassroots, citizen-led projects. Indeed, some credit for the success of this intersection of creatives along WAC could be given to the establishment of a Chicago Cultural Plan in 2012, which created a framework for the city’s arts and culture growth.

“We are passionate people who have a great idea,” Newell says. “Part of the reason it also works is that it feels organic, it feels like it comes out of a real need. With Wabash Lights, the idea was the right intervention at the right time.”