What Happens When Developers, Scientists and Super-Computers Connect on Urban Design – Next City

What Happens When Developers, Scientists and Super-Computers Connect on Urban Design 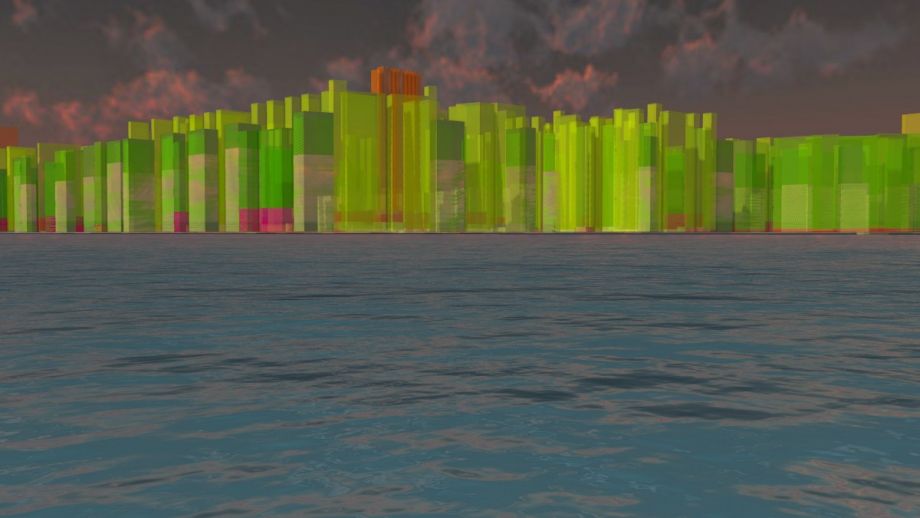 On Chicago’s Southeast Side lie the ramshackle remnants of a U.S. Steel plant, shuttered and abandoned in 1992. Now, plans are underway for a huge mixed-use development, called Chicago Lakeside, on that precious lakefront property. The project calls for 13,575 residential units, millions of square feet of commercial real estate, extensive parkland and a high school. It is expected to take decades to complete.

A project of this scale — it has been dubbed a “mini-city” — will obviously have significant effects on Chicago’s energy consumption and traffic patterns, among other ramifications. How can the developer try to predict those effects and design strategically?

One option is to enlist some of the most hard-core scientists in the world. The developer, McCaffery Interests, is collaborating with Argonne National Laboratory, a federal research center near Chicago. Formed in 1942 as part of the Manhattan Project, the lab has played a role in breakthroughs ranging from hurricane prediction to the discovery of einsteinium and fermium (elements 99 and 100 in the periodic table, as you surely remember from high school chemistry). The facility houses one of the world’s fastest supercomputers.

Now, Argonne scientists are taking on a challenge not usually associated with sophisticated computing: urban design. They say that for such large-scale developments, expert opinions, or even standard modeling, will no longer do. Instead, we need detailed simulations that will integrate immense amounts of data into one framework and project different scenarios for the designers to consider. Their initial prototype, called LakeSim, focuses on Chicago Lakeside.

“From our point of view it’s about using high-powered science and computing to make cities more livable and efficient,” says Argonne scientist Jonathan Ozik. “Design processes tend to be pretty ad hoc, tend to be pretty time-consuming, tend to be pretty unsatisfying … If you are creating this site that has 600 buildings, to be able to understand the impact on water, energy, economic development is really important.”

Ozik and his colleagues have software that calculates the energy footprint of each planned building, based on characteristics such as the area, direction the windows face and projected occupancy. They also simulated weather scenarios for the next 20 years. If the developer gives them a design, they can gauge the energy implications, including ranges of uncertainty. One limitation: They didn’t factor in climate change, though they may do so in the future.

Another team at Argonne is focusing on transportation. These scientists made a virtual representation of the city’s transportation system, including all the roads, the number of lanes, traffic signals, and schedules of each of the train routes. They incorporated census and survey data about travel patterns as well. Roughly 30 million trips take place in the region every 24 hours, according to Vadim Sokolov, an Argonne engineer and traffic expert. The high-powered computers can take all of them into account. The scientists are also accounting for different future hypothetical scenarios — expanded use of autonomous vehicles for the “last mile,” growing popularity of bicycles. This modeling can help inform decisions about infrastructure on the site as well as in nearby affected areas. (The city government will obviously need to be involved.)

Transportation modeling has been around for decades, and energy modeling, too, is widespread. What the Argonne scientists add is the ability to model in much greater detail and at much greater speed than the typical methods. What might take days for other computers, they can complete in a matter of hours. They also integrate the simulations into one framework, in order to see the interplay among various factors.

“The output generated by the models is massive,” says Sokolov. “It’s not something you can open in your Excel spreadsheet.” The scientists then have to interpret it and visually represent it in order to communicate it in a meaningful way to the developers.

The use of this technology doesn’t guarantee any particular outcome. If they find that the development will likely increase congestion, one possible response is to expand the highways — a choice that would be anathema to many urbanists. But the models do assess not only congestion but also the energy consumption associated with transportation, so the tool could be valuable in identifying the most environmentally sound options. According to Ed Woodbury, president of McCaffery Interests, their goal is “a more sustainable city.”

Of course, other aspects of this project might rub those urbanists the wrong way, too. Computer-aided master planning doesn’t exactly sound like a concept that Jane Jacobs would warmly embrace. And the development has aroused concerns in the adjacent community on Chicago’s South Side, with some residents worried about gentrification.

But as the world continues to urbanize, such massive developments are happening, though more often outside of the U.S. Notably in China, the erection of whole cities from scratch has occurred with staggering speed. And when cities are built, choices made at the outset reverberate for decades to come, for the environment and for the people who live there. If this super-advanced modeling can facilitate more far-sighted designs, it could do a lot of good.

At this stage, the success of the prototype remains to be seen. Nothing has been built yet. “As we start to create the developments, we’ll start plugging those into that model and see what they yield back to us,” says Woodbury. But the scientists hope use of the methodology will grow, especially in developing countries.

As for all of the other dimensions of a beloved urban area: aesthetics, community, soul? “This tool won’t help with that,” says Woodbury. “You’ve got to keep your eye on those balls as well.”