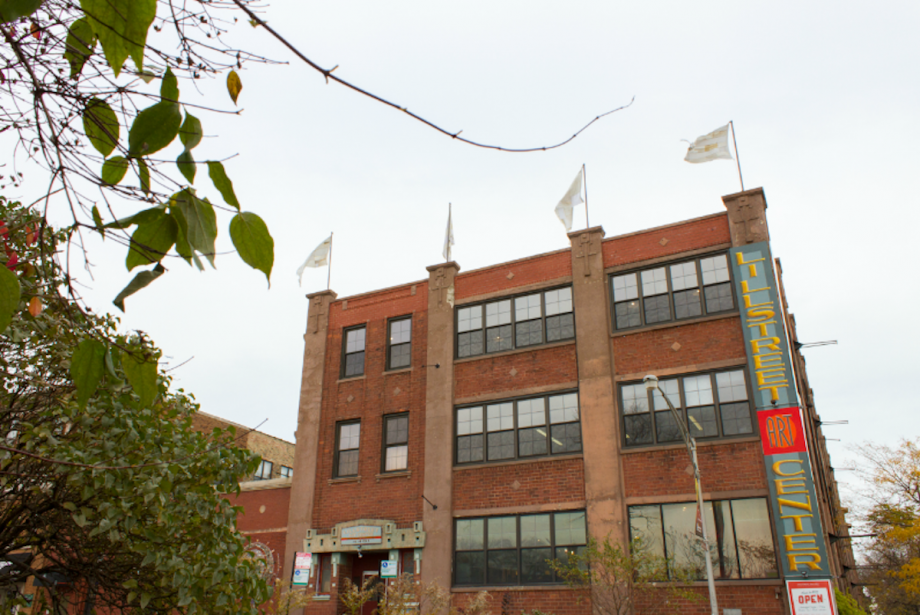 “I love my girl with all my heart but I don’t think she’s very smart.”

“I love my sister but would love to like her more.”

Passersby couldn’t read these personal messages — more than 40 in all — which were painstakingly sewn onto four flags by artist Emily Manalo Ruiz for her “RELEASE” project. The installation waved atop the roof of Chicago’s Lillstreet Art Center last November. From Montrose or Ravenswood avenues or a moving CTA Brown Line train, the 8-foot-by-5-foot flags probably just looked white, or white-ish — and maybe a little tattered by Chicago’s infamous elements.

Each month, Lillstreet uses its airy Rooftop Project Space for, as the center’s Nora Renick-Rinehart puts it, “exhibitable work outside of a four-wall paradigm.” The projects don’t necessarily have to be flags, but they must be work that can be hung from four 9-foot poles.

“[We had] one shaped like a plastic bag made out of fabric. When the wind filled it up, [it] created a three-dimensional object. [It was] cool to see a non-flat object hung on a pole,” she says.

Renick-Rinehart, who manages the roof exhibits as part of her artist-in-residency, says the selection committee looks for site-specific works that “incorporate the architecture of the building or the sky.” Ruiz’s flags, with their anonymous confessions, worked in the sky metaphorically by exposing those whispers to the air.

Ruiz often works with flags, and her works have a kind of minute, precise attention to detail that makes your fingers ache. But for “RELEASE,” she says she took on something more agonizing: waiting for strangers to trust her with their secrets. During a three-month call for submissions, she relied on social media and self-addressed, stamped envelopes left in art centers and coffee shops around Philadelphia and Chicago to get people to share the words she’d incorporate into the project. (Ruiz’s brother Ron even recruited written confessions from his fellow merrymakers at this summer’s Burning Man festival.)

Submissions ranged from a terse Post-it stating “time doesn’t heal wounds” to a long letter about the stigma of mental illness delivered on many sheets of Hollywood’s Chateau Marmont stationery.

Lillstreet’s rooftop exhibits last one month each, May through December, so the artwork is exposed to all that nature dishes out in Chicago.

After the flags arrived at the gallery, a coordinator asked the Philadelphia-based Ruiz if she was aware of exactly how windy the Windy City can be in November. “I like the idea that these pieces are literally delicate, raw, vulnerable, exposed, out there. We could all use lessons in letting things happen, in letting material things go,” she says.

After a month of flying, Renick-Rinehart noted that two of the flags were “almost completely destroyed. The wind whips them around and they get caught on the poles. I don’t think that this is necessarily a bad thing in the context of [Ruiz’s] piece. The idea was to let it all out into the universe.”

Lillstreet is currently accepting applications for the May through December 2015 shows. The deadline is February 2nd.

Loren Hunt is a writer and teacher who lives in West Philadelphia with her dog, Small Jake.