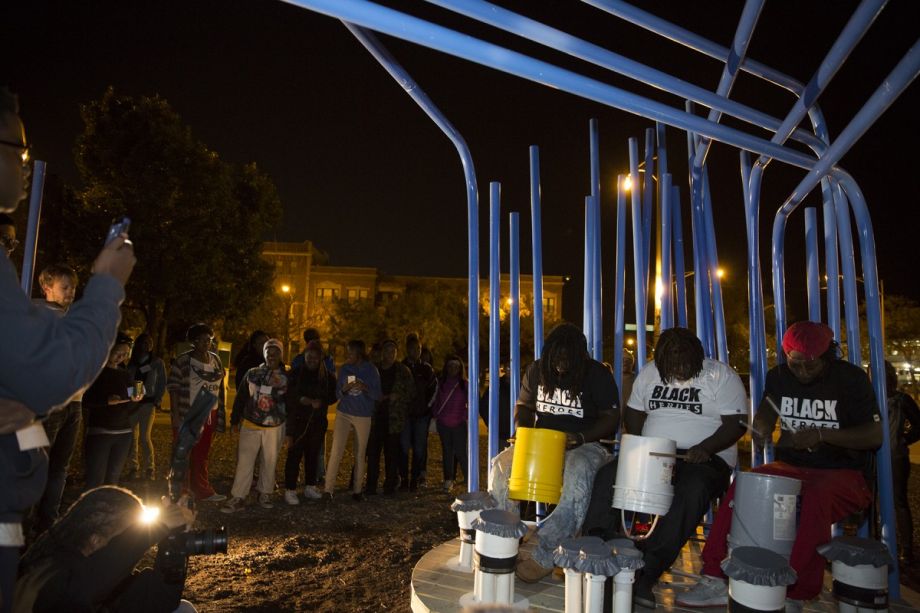 Earlier this month, Chicago took in its last glimpses of the city’s first architecture biennial. An outgrowth of the City’s Cultural Plan and drawing more than half a million visitors over three months, the biennial enabled a vast network of spaces where different approaches and roles of architecture and design in communities were brought to multiple audiences. The programming offering was intense and amplified by the multiple partnering institutions that offered their spaces across the city.

Among the exhibitions that came down was one I spent the last half-year working on with my colleagues at the University of Chicago’s Place Lab and Arts + Public Life Initiative headed by artist Theaster Gates. The exhibition, “Forms of Imagination,” explored the role of public design and architecture projects in fostering creative communities and gave visitors the opportunity to experience the spaces and programs that our team has pioneered on Chicago’s mid-South Side.

In collaboration with co-curator Tempestt Hazel, we selected three projects to be featured that would showcase a variety of scales and collaborative processes: a vending cart inspired by a neighboring street entrepreneur, an oversized outdoor drum set in a vacant lot, and a new public arts center. All three projects were in progress under different timelines, and contributed to expand our programming to adjacent outdoor spaces on the block. Within the Arts Incubator we documented their development during the time of the exhibition, and shared the process of making these projects happen. The overall goal is to inspire other creative projects and to demonstrate how they can positively transform the community’s landscape.

Through the cart and the temporary installation projects, we enabled collaborative processes with two distinct perspectives. For the reimagined vending cart, called “Nomadic Habitat,” Chicago-based Carlos Rolón/Dzine collaborated with Garland “Hustleman” Gantt, a street entrepreneur who locates his truck next to the Garfield station every day, across from the Arts Incubator. The new design of the cart was the reflection of the artistic expression and aesthetic explorations of Dzine and very pragmatic needs of Hustleman. After the first month of the exhibition, Dzine and Hustleman revealed a reimagined vending cart on the corner of Garfield Boulevard and Prairie Avenue. The cart’s compartments were filled with everything from clothing, bedding, accessories, snacks and a new boom box, and outdoor lighting that activated the evening of mid-October. Hustleman thought his usual clients would not follow him across the street that evening; they not only followed, but he also gained new ones and sold more goods than in a regular weekday evening. Across the street on a vacant lot, Chicago-based urban design studio Port Urbanism and drummer, music composer and South Side resident Mikel Patrick Avery revealed the “Resonation Room,” a temporary installation inspired by the Bucket Boys. Over a couple of months, this team explored the relationship between performers and audiences, scales and patterns of acoustics and resonation, and affordable materials that would allow sound traveling and form experimentation. Composed of five circular wooden stages delineated by PVC pipes, it debuted with the Bucket Boys and Mikel Avery’s performances. The evening that these projects were activated, they brought together exhibition visitors, neighbors and curious pedestrians in a unique urban performance space. Kids, teens and adults were excited with the performances and the objects alike. Everyone wanted to play and stayed out late on a school night.

Another activation on the block was through an outdoor screening. The new arts center, a planned redevelopment project next to the Arts Incubator, aims to expand the cultural offerings focused in performing arts and cinema. This screening showcased potential programming and was also an opportunity to create a conversation about neighborhood changes prompted by curated footage from everyday public life in the South Side. Multiple neighbors shared their concerns and hopes for upcoming neighborhood changes, but also acknowledged and discussed the training and job opportunities that may be created by this kind of investment in cultural amenities. This was not a public meeting; it was just another hangout in the neighborhood with hot chocolate, popcorn and s’mores. I guess these kinds of conversations can have a more positive impact when outside of formal and traditional settings.

Our work at the Arts Incubator furthered my belief that these casual “hangout” and exchange moments are equally important to the more formal part of our programming. It is clearer than ever the capacity that arts, culture and design content have to be transformative when they extend beyond building walls. The future of creative placemaking won’t be either-or, but both: It is as important to continue creating defined and permanent spaces for cultural production as it is to continue exploring opportunities in the public realm to amplify public life of the community.

Paola Aguirre is an architect and urban designer from Northern Mexico, and founder of Borderless, an urban design practice based in Chicago, and The Borderless Workshop collaborative initiative that focuses on the U.S.-Mexico border region to further the understanding of cities by looking for intersections between architecture, urban design, infrastructure and ecology among the border conditions. Aguirre is also a Next City Vanguard.