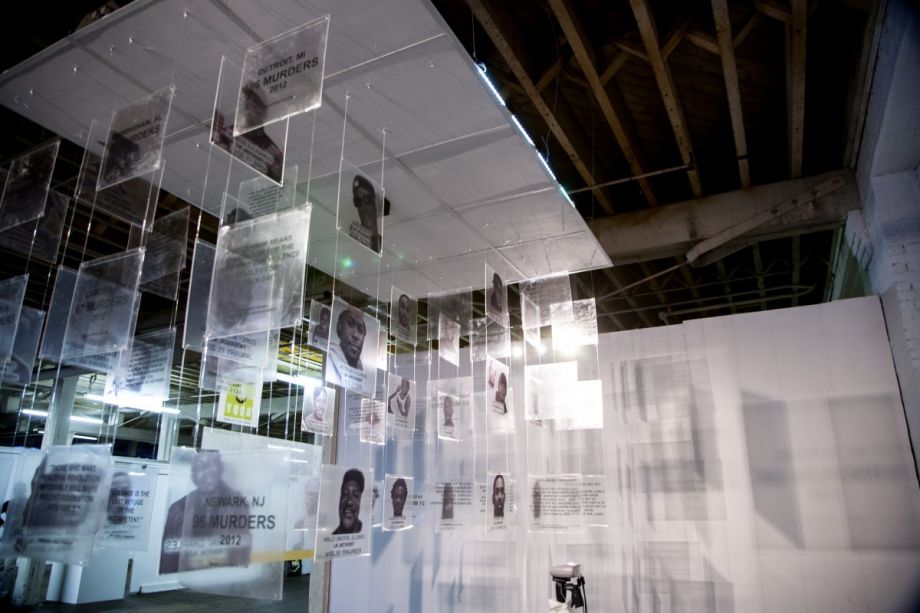 One of the hanging tiles at “CATCH a Body” features a Stephen King quote: “How many have to die before we will give up these dangerous toys?” (Photo by Colleen Gutwein, Small Forest Productions)

The message that William Tate wants visitors to receive as they pass by his art installation’s hanging collection of 12-inch square, plexiglass tiles bearing the faces of victims of gun violence is that they must stop and look. Too often, we hear the news of another death and keep moving, never pausing to see the life that lost. This Tuesday, guests are welcome to a final, free viewing of “CATCH a Body” at the Art Factory in Paterson, New Jersey.

Half of the exhibit’s 72 tiles bear the likenesses of people lost to gun violence — some from Paterson, others from neighboring cities in Northern New Jersey and some from even Philadelphia and Chicago. One square, for example, shows Trayvon Martin. The other 36 tiles carry bites of information (82 children under the age of 5 were killed by firearms in 2010, compared with 58 on-duty police officers) and famous quotes (a plea from Stephen King: “How many have to die before we will give up these dangerous toys?”)

“The homicide rate [here in Paterson] has just gotten out of control,” says Tate, president and founder of TateSpace, a multidiscipline urban solutions incubator that specializes in tools for revitalizing cities. This exhibit stems from the engagement and design stripes in his work. “‘CATCH a Body’ is an approach to looking at the social infrastructure of the city, and bringing awareness that we need to the community to understand that this is something that needs to stop.”

Tate, a 2014 Next City Vanguard, worked with architect William A. Moses, who served as the project’s construction manager. They built the installation with the support of two anti-gun violence non-profits: the Love Mike Nia Foundation, which provides programming and scholarships in memory of Jersey City couple Michael Muchioki and Nia Haqq, friends of Tate who were murdered on the way home from their engagement party, and No More Rounds, the producers of a documentary short airing in the installation. “CATCH a Body” is dedicated to Shirley Chambers, a Chicago woman who lost all four of her children to gunfire. (CATCH stands for Carrying a Torch to Cease Homicide.)

The installation’s plexiglass tiles are intended to make viewers reflect on the normalization of gun violence in the U.S. (Photo by Joseph Moore)

Paterson, a city of 145,000, saw 18 homicides in 2013, according to the New Jersey State Police. While that represents three fewer deaths than the previous year in town, the homicide rate in New Jersey reached a seven-year high in 2013, the Star-Ledger reports. Murder numbers leaped in Trenton and Newark, a contrast to the historic lows reported in cities like New York, Chicago and Philadelphia.

This closing event for “CATCH a Body” will raise awareness for the death of slain 12-year-old Genesis Rincon. Rincon was killed in Paterson by a stray bullet while riding her scooter earlier this month. Her death has sparked an uproar in the city — remarkably, her alleged killer turned himself in last week largely due to pressure from community members. Tate says the funeral costs are around $15,000, but hopes that community fundraising efforts will surpass that.

Tate, who was recently appointed to Paterson’s historic preservation commission, believes cities struggling with gun violence should invest heavily in recreational activities for the youth.

“More transformative and creative programs and/or events, which directly involve the citizens and focus on cultivating social capital, should inherently be a part of the city’s ethos,” Tate expands in an email. “Community engagement, with a purpose, is key.”

After the exhibition closes, the next step in the project will be creating a documentary. “I know it’s a long road ahead to take the installation and create that awareness within a city, but you have to start somewhere,” says Tate.

The viewing will begin at 6 p.m. Tuesday, and refreshments will be served.