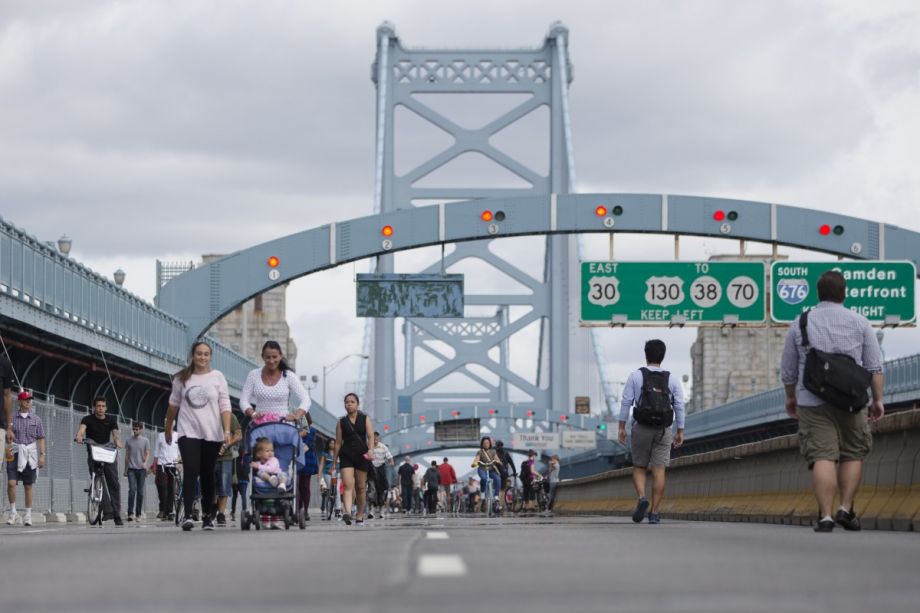 Pedestrians flocked to the Benjamin Franklin Bridge, which connects Philadelphia to New Jersey, when it was closed to traffic during Pope Francis’ visit. (AP Photo/John Minchillo)

As a visit from Pope Francis upended business as usual in Philadelphia, the city’s residents (those who stayed in town at least) got a compelling peek at what a car-free city might look like as a traffic ban took over downtown streets. The result? Fewer shaking fists and more of a push for a no-vehicle zone, with Mayor Michael Nutter endorsing another crack at some car-free streets — and soon.

A petition, posted online Tuesday, calls for Center City streets to ban cars during some summer weekends in 2016. Created by Open Streets Philly, it currently has over 3,700 signatures.

But news site Philly Voice reports that the Mayor is interested in implementing the idea in 2015 and has asked his team to begin gathering data.

“Mayor Nutter is excited about the possibilities for creating an innovative urban commons on a section of Center City, considerably smaller than the Francis Festival Grounds, for biking, walking, running, skateboarding, rollerblading and a range of programming,” Nutter spokesperson Mark McDonald told Philly Voice.

The man most likely to be Philadelphia’s mayor come January 2016, Jim Kenney, has expressed support for the petition.

Creators of the petition want to avoid the Pope-visit-driven disruptions to public transit and local businesses. Open Streets Philly’s Jake Liefer told Philly Voice they’re advocating for zones that target particular streets and car bans would likely only be in place for part of the day.

“Lots of Center City businesses saw their sales dip over the Papal Festival weekend; we need to include those businesses in planning this from the jump,” reads the petition. “We’re confident Open Streets can be an opportunity for neighborhood businesses to meet new customers and generate new business.”